I’ve made a couple posts about decks that level 10’s above 5k uses and you can take a look at here for more details. 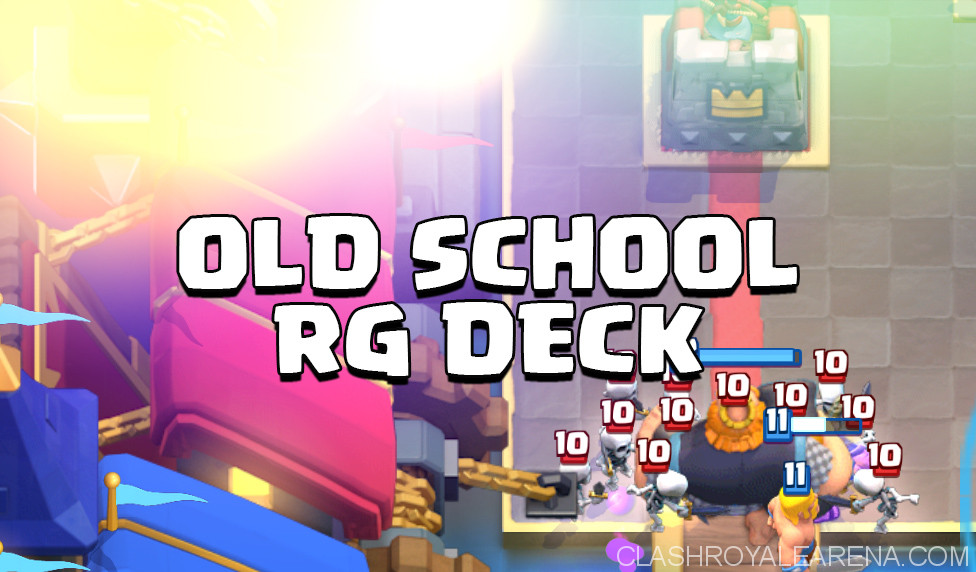 Royal Giant: The main Tower taker. Must always be supported or put in front of leftover troops from defense. This card is in a good state right now, and I think it is balanced because many things can counter it without taking too much damage.

Ice Wizard: Beast defender. Mitigates hundreds of damage and can be paired with RG. My 3rd legendary, and one of my favorites. It provides so much value for only three Elixir. Kills Minions, skarmy, and any cheap troops with the help of your Tower.

Miner: Used if RG isn’t in your hand. Paired with Minions and Goblins can take Tower. This is my favorite legendary so far. I use it for many plays. If they use Archers or ice Wizard to defend your Tower, don’t be afraid to send in Miner to kill them. Then, Zap the Tower to target on to your Miner and let the Royal Giant continue shooting.

Minions: Great support troop that offers insane value. It will wreck anything that if used to stop the RG, so always pair it up if you can. Lots of DPS and is a cheap alternative to barbs when defending against hogs.

Goblins: Great chip troop and distraction. Does a lot of damage when paired with Miner. I really like this card, and Ironsy uses it for tricky plays. It can be used to cycle and chip the Tower, but it is also a great defender and distraction. It can be used to distract Mega Minions and also chip the Tower, distract Mini P.E.K.K.A so it won’t even hit your Tower, and much more.

Barbarians: Main defense card. It can and will shred through every tank there is, and when paired with Ice Wiz can easily shut down any push. IMO, the best defensive card in the game. Perfect cost and DPS. Overleveled is annoying as hell to deal with, so make sure you spam the requests for this card! Also spam Royal Giants. This card is great because it defends well, and also requires immediate attention as ignoring them will lead to Tower destructions.

Zap: Use it for gob Barrel, Inferno Tower, Skarmy, you name it.

Elixir Collector: Cannot be replaced. When placed down, try to defend if they try to take it down. You should place it down in the beginning if you have barbs or Minions so you can defend their rush.

The Legendaries in the Deck CANNOT BE REPLACED. Elixir pump is a must have, as it allows you to cycle quickly. This Deck is a Royal Giant cycle Deck, even though the average cost is 3.8.

Goblins/Minions + Miner: This deals a ton of damage if ignored. Pretty cheap and Iron sometimes starts off like this to see how the opponent counters.

Leftover troops+Miner/RG: Delicious and annoying to deal with. The leftover troops will surround the RG, protecting it and also dealing with the defenses. Same goes for Miner.

RG+ Minions: This takes down towers quicker than you can say “Elite Barbarians”

Side Note: A lot of times, when they use ranged troops to defend against RG like Archers or Musketeer, don’t be afraid to send in Miner to kill it. If you have a Miner on the Tower and RG + something else, Zap the Tower so it targets the Miner and gives the RG extra shots off.

With Barbarians: Barbarians aren’t used very often now, but they still provide insane value. Used against Hog is a -1 trade, but that’s fine because they now have to spend more Elixir to defend against the barbs. Note: Barbs can shut down Hog without it even touching your Tower if placed down quick enough.

With Ice Wizard: Ice Wizard is used mainly with something else, like Minions, Goblins, or Barbarians if they have a huge rush coming. The slow effect cannot be replaced, and is by far one of the best abilities.

With Goblins/Minions: Goblins are insane. One of my favorite cards, they can be used with Ice Wiz to defend Hog pushes. Same goes for Minions.

With Miner: Don’t, unless you run out of options. Miner does a decent amount of damage, but I usually use it to attack pump or princesses.

This Royal Giant Deck takes a fair amount of skill.

Before you guys start ranting about how all you need to do is to place it down, think about why the RG is hitting your Tower. Is it because you can’t defend? Do you need a building? Is it your fault you run out of Elixir and they have enough to counterpush? This Deck cycles fast as hell, as I mentioned before. The pump also gives you lots of Elixir so you can keep cycling and defending.

What you want to do is to spend as little Elixir possible to defend, and focus on the counterpush.

If the Tower is really low and they send in something huge like a tank, just ignore it and go offensively. A lot of times, the games end in 2-1 wins because Iron ignores the push coming when his Tower is low, and instead goes offensively.

For example, there is a Hog Rider coming at your 500 health Tower and you know he has Fireball or Rocket. You already have one Tower down, and his other Tower is at half health. You would want to use Goblins instead of barbs, because the Tower is going down anyway, and you don’t want the Hog to stay alive much longer after it destroys your Tower. After you use Goblins, immediately place RG in the middle of the opponent’s side  so it starts shooting at the Tower for the win. Easy.

Another “strategy” is RG and Minions.

Lavahound: Cancer Cancer Cancer. Always rush the other side with RG and Minions. Use Ice Wiz to defend, because the Lavahound itself won’t do too much damage. You can cycle quickly back to your Minions if you have to. If they have Lavahound Balloon, they usually have Arrows as well. That’s fine, just remember to pressure the other side so they may not get a chance to use the Balloon.

Here’s him beating a level 13 with Lavaloon: 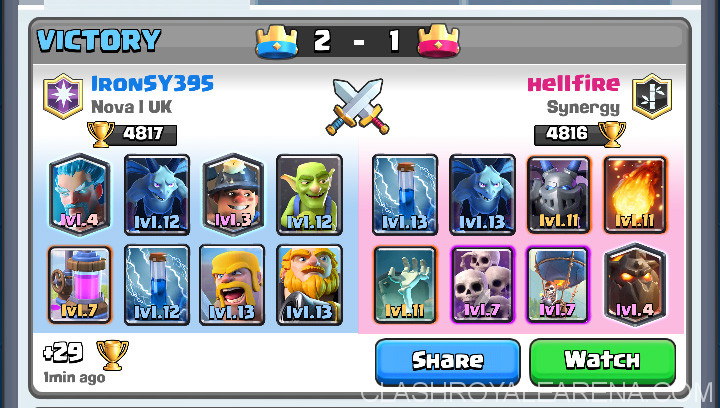 Hog Cycle: You have many defenses in this Deck. Use them all. You cycle almost as fast as hogs, so you should have at least Goblins or Barbs everytime.

Siege: RG is their worst nightmare. Don’t be afraid and save your RG for the Siege. Use it on offense as much as you can. Mostly though, the game ends in a draw.

Beatdown Tanks: Against Giant and other tanks, remember to always use Ice Wizard and Barbarians together. Against Golem is a little harder, and against Golem Elite Barbarians is just pure cancer. Cycle and use your Goblins and/or your Barbarians and Miner.

Note: Don’t be afraid if they have a tank and Elite Barbarians. Use barbs for the Ebarbs if you have to. You can usually defend the tank with Ice Wiz and Minions/Goblins.

Overall, this Deck is insane. The synergies and offense is spectacular, and defense is pretty good. You want to try and spend as little Elixir as possible to defend, so you can focus on offense. I rate this Deck a 10/10, and I strongly suggest trying this Deck in ladder if you want to push.