Wassup guys, Dark/Dank Prince here with by far my favorite guide! As you all should know by now, I love cheap/cycle decks, and this guide is over my favorite cycle deck ever. Although the title should say what deck it is, it’s 2.6 Hog! I know what you’re thinking, “this deck is so old” and although partially true, it’s still a beast. So, let’s hop into the guide! 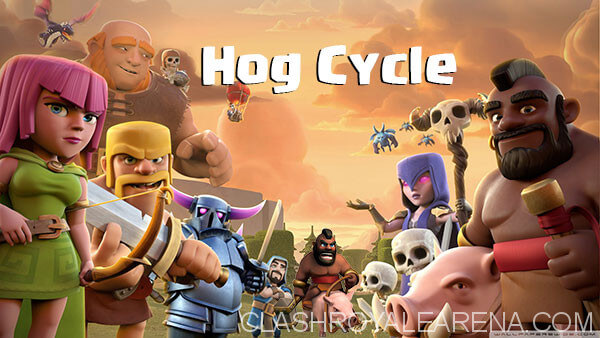 Hog Rider: Hog is the center of this deck. That means Hog is your main win condition, and sometimes it’s best to play him aggressively, but not always. At tournament standard, Hog only has 1408 hit points(tourney), which is quite a few for a 4 elixir card that deals 264 damage(tourney), but it’s still easy to counter. Don’t waste Hog Riders, especially not versus heavy decks.

Musketeer: This is another vital card in this deck. Musketeer is Hog’s BSCE(best support card ever). Costing only 4 elixirs, able to hit air and ground, this card is your main support and defense. At tourney standards, Musketeer deals 176 damage and has 598 hit points. Meaning it can 1 shot Goblins and Spear Goblins of the same level. It can also 2 shot Lava Pups, Minions, Archers, Bombers, and Dart Goblins(all 1 shot with Zaps help) at tournament standard. Zappies need Zaps to help for a 2 shot at tourney standard, but anyway, as far as taking out other glass cannons/support, Musketeer is able to 3-4 shot most support cards at tournament standard. Remember me mentioning 598 hit points? Well, that means it can survive a fireball, multiple Mortar shells, 1 poison, 3 arrows, a lot of Zaps, and a few Logs all at tournament level. Which of you see used together more than not, but still, it’s pretty cool.

Cannon: This card isn’t very loved any more, but without this card, well for 1) it would cost more than 2.6 elixir total, and 2) it just wouldn’t be the same. Cannon is a defensive card you place on your side of the arena to distract troops that normally would attack your tower. At tourney standard, Cannon has 742 hit points and deals 127 damage, or 158 damage per second(0.8 hit speed). In other words, this card can be a beast on defense if used right. Versus Golems and Giants of the same relative level(tournament standard), Cannon can distract/chip them down low enough to where your towers can finish them off with little to no damage taken from them. Versus Hogs or Battle Rams of the same level, Cannon can usually kill them completely with the help of Towers.

Ice Spirit: *cues heavenly music* Ice Spirit is Bae. There I said it, are you happy? Anyways, Ice Spirit is way-way more than a cycling card that randomly supports you in this deck. Ice Spirit is used almost more than your Hog. It fits in perfectly on defense when you need your Tower or Musketeer to just get one more hit before being hit, or on offense when you know they have something to kill your Hog, or that tower is doing too much damage just a little too quickly for your likings, Ice Spirit is your card.

Skeletons: I rarely see these guys anymore, but they’re still as good as ever! These take up Ice Spirits position as the main cycle card in this deck but don’t only cycle with them. These 3 amigos deal rather good DPS when they get the chance, 67*3 to be exact at tourney standard, so they work well in supporting Cannons, Towers, or Musketeers on defense. Want to cycle and push at the same time too? Well put these behind your Hog and Ice Golem and see if they help you get some damage while you cycle, it’s possible!

Fireball: Fireball in this deck is a gift from the heavens, and to your opponents, a surprise from Hell. Fireball only costs 4 elixir and deals 572 area damage(tourney standard) so with it, you can take out most same level glass cannons with just 1 Fireball and a Zap. Or on your own pushes, if there’s something like a Minion Horde or Barbarians that are giving you trouble every time you try and push, keep Fireball in hand and watch the opponent cry as their 5 elixir goes down the drain(Barbarians will survive, Zap can help). In other words, its a support killer, and support spell in this deck.

Zap: I feel like I’ve mentioned Zap so much in this deck that you know what it’s for by now. You use Zap to finish off troops, or completely kill them if you can. More than likely you’ll do both in the same match.

Giant: Giant is almost never a problem like Golem is. Giant has fewer hit points than Golem meaning you can take it out much quicker than you could a Golem. Still, try not to let them build up, keeping their pushes split almost always results in a win.

Hog: All other Hog decks bow down to this one. You have an advantage Hog decks want, and that’s cycling ability. Most other Hog decks cost 3.0 elixir or more, so you have an extra .4 elixir taken off that gives you the upper hand on them. The key is to attack aggressively, while always having enough elixir for a Fireball, Cannon, or Musketeer to defense.

Balloon: Boi. I don’t know why I added this here, this isn’t a matchup it’s slaughter. After getting used to this deck, it takes an extremely good Balloon player to beat you, because they have to out cycle you and all of your Balloon counters while defending your Hog pushes. If they have a Lava Hound then so what, hold that Cannon and Musketeer for their Balloon. Hound ain’t gonna take the tower.

Pekka: I added this since Pekka is problematic at first. Pekka is a card that effectively stops Hog and then can be used as a counter push rather quickly. But there is a key to beating Pekka, and that doesn’t let them know which side you’re gonna attack from. If you can keep them guessing then you can easily keep them out cycled, while taking little to no damage on your towers.

Golem: Golem is always tough because 1 mistake and their push can obliterate your tower. Like Giant though, split up their pushes. In single elixir, they usually spend time building up pumps, and defending whatever you throw at them. As long as you show that you have elixir, keep their number of pumps low(0 preferably) and chip then you’re fine. X2 elixir can get rough though, especially if they have pumps. If not then just never push in the same lane as their Golem. Even if that Tower is low and needs 1 more hit, spells can take care of that later. If they build up too much behind the Golem, then you lose. Cycle cannons and musketeers defensively, hold spells for their support, and chip with Hog as much as you can.

Siege: Siege is another rough one for Hog since it targets buildings. Once most siege players see your Hog, they will go into this defensive mode where they do nothing unless you play Hog, and that can be quite annoying. So do like they do, if they don’t play their siege card, then you don’t play your Hog. Cycle through your other cards until one of you crack.

Royal Giant : The old enemy of Hog, but it’s now dead. Don’t even worry about RG anymore. Cannon + Skeletons or Musketeer to defend it + it supports, and Hog when they have no elixir. It’s that simple now. 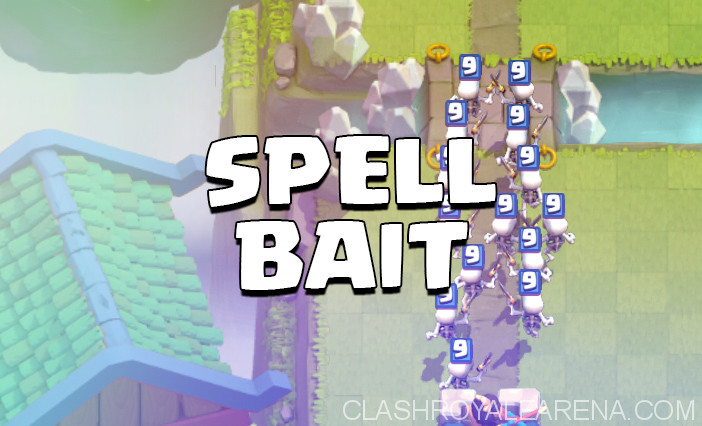 Spell Bait: Ehhh, since it’s not as strong as it used to be, all you have to do now is out cycle Tornado or their buildings, and keep Zap in hand for their “pushes”. If all goes well you’ll out cycle them and win, if not, a tie usually ends up happening. Oh, and if they start cycling spells, go all out. Odds are they can’t Rocket and place that Inferno tower fast enough to stop your push.

3:00-2:30: It’s vital in this deck to maintain the elixir advantage, I always wait until 9.5 elixirs to place anything at the start, unless they’ve started a push. But this is where you grab hold to an advantage, learn their deck, and plan out how the rest of the match will go. Assign cards to defend versus their cards, then stay true to those assignments unless necessary not to.
2:30-1:00: By now, you know their deck, and they either know or can guess yours. Start showing them how fast you can cycle, but don’t lose that advantage in elixir. Naked Hog Riders as a chip, or just Hog + Ice Golem work wonders in this time period. Also, don’t lose the hp advantage on towers. Any damage they do, try and return it or double it.
1:00-0:00: Mwahahahahahaha! X2 elixir is your friend, their enemy. If you still have the elixir advantage immediately start a medium to large push(spend 7-8 elixir) and then wait. As the game progresses, do some slightly larger pushes(9 elixirs) and see if you can finish a tower or 2. Remember, the elixir advantage that’s critical of you to keep can end up meaning whether or not you can defend their pushes. So be wary of those medium-large pushes if you lost the advantage. If you never had the advantage then stick to small pushes, and cycle your cards(except Hog) out for defense instead of offense. OT isn’t anything to worry about btw, you can go into OT with the elixir advantage and come out victorious, or without one and come out victorious. Either way, end matches with them knowing how strong of a player you are. Hope you never lose. 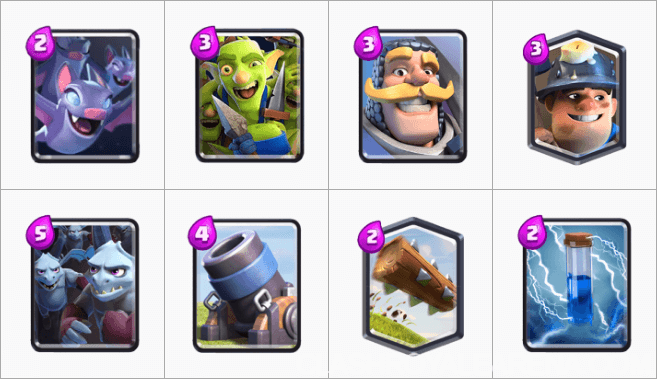 And that’s all folks, this is by far my longest guide, because well, this is my favorite deck. For months I have used this deck, perfected how I play it(I still mess up sometimes) and gotten better with it even still! I hope you do the same, but quicker with the help of this guide. Peace!