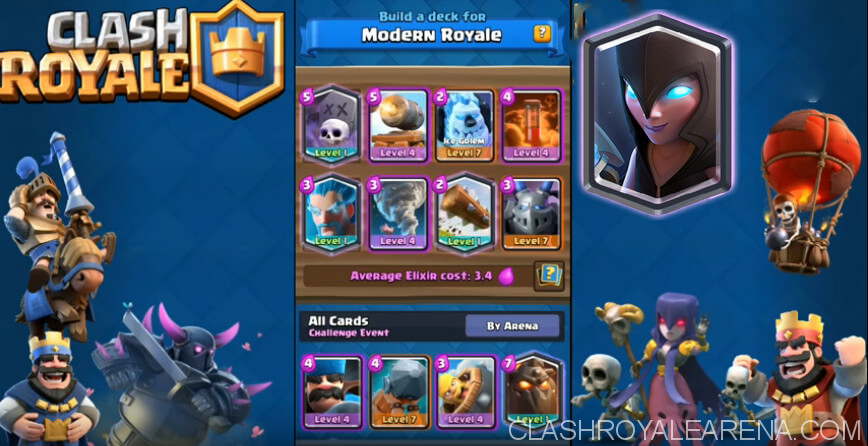 Tired of losing in the Modern Royale challenge? Frustrated with all the Mega Knights jumping from only-supercell-knows-where above to smash your chance at victory? Not a fan of MK decks? Have no fear! I’m Dave, and I’m here to share a deck I used to win the modern royale challenge on my first attempt.

I call it…the Night Witch Hunter Modern Royale Deck! [I know, I know…it’s quite a mouthful]

The Night Witch Hunter deck is made up of the following cards:

This deck works better as a counter deck [although my main man Avatus had no problem dropping a ram and cannon cart to take a tower at the very beginning of his last battle…for the rest of us who are more fainthearted, including myself, a slow start is recommended].

It can rapidly build up a push that will decimate your opponents and leave them wondering where THAT came from. Best of all, it’s a 3.1 elixir deck!!!

Let me break it down for y’all, starting with the ice spirit after which l will highlight some general tips as well as what to do against certain troops [MK…3 Muskies…RG]

You’ll want to use him mainly on defense, especially to support our shotgun-wielding glass cannon a.k.a. the Hunter. In defending against the jamboree of Mega Knights, ice spirit will be vital in freezing his jumpy ass while your troops take him out.

The card with a PhD in Kiting is the tank of this deck. The ice golem will be very useful on offense as well as defense. When defending, use the ice golem to kite as much as possible – Elite barbs, MKs and all other kitable troops. Just don’t forget to take out the kited troops with a cart…elite barbs especially. For others, like the Royal Giant [yeah…even he shows up] use the ice golem to engage the support troops while your hunter takes the RG out. Then play the ram, throw in bats and watch your opponent squirm. [ ^_^ ]

Bats! These little dearies will be awesome on defense, especially when paired with the ice golem. They can deal massive damage on the counter when you make sure they are tanked by the ram or any other troop with decent hitpoints [not you Hunter…].

The princess is the touch of royalty that this deck needs. She deals with all the annoying swarm cards – it WILL be raining goblin gang and bats. DO NOT drop the princess at the bridge. If you do and you’re hit with a goblin gang, bats AND graveyard combo, don’t say Dave didn’t warn ya.

The ram is the win condition in this deck. it also serves as the secondary tank. Don’t drop the ram at the bridge at the beginning of the battle. Your opponent will counter and have an advantage. Besides, the ram has far more utility than bridge spamming. It could be used on defense for the extra oomph that the two barbs can add. On offense, it will tank for your support troops (night witch, cart and hunter). I’m also quite certain you’ll agree that the ram smashing into a tower is one of the best scenes in a battle. [ ^_^ ]

Play her behind the king tower and let the bats fly! The Night witch, like basically all the cards on this deck is strong on defense as well as offense. She works better on offense though. Her bats are useful in dealing with any Lava Hound decks that might be lurking around as well. On offense, put her behind a tank, and your counter push will deal significant damage, especially if you’ve been making them positive elixir trades (PETs).

The hunter kicks ass in the modern royale challenge. In this deck he is used primarily on defense. Drop the hunter to take out enemy tanks while using an ice golem to distract their support troops. The ice spirit is a vital support to the hunter on defense as it could help him survive and be on the counter push.

The dreaded cannon cart! With an insane speed and insane range, the cart is the heaviest troop on this deck. On defence it should be played in front of the King Tower as it’s awesome range will let it snipe the attacking troops and then be on the counter…with full hitpoints…behind a tank. The cannon cart is formidable indeed.

Now for the general tips!

MK – the kite with ice golem and finish off with bats or hunter, if necessary. If you’re out of the rotation, drop the cart in the middle to deal with the MK, then clear the support troops and counter, if you have the advantage.

This is a 3.1 elixir deck people! So cycle cycle CYCLE! Be ready to counter push at any moment.

Watch your opponent. Know which cards they have in their deck and what they will drop next. Trust your instincts and play to win!
I’m already getting some excellent results from my clan mates. My man Avatus hit 6-0 baby!!!

Okay guys, you’ve seen it all. So what are you waiting for? Now go out there and make me proud!!!!