Hey guys! The Ice lord here with my 3rd guide!
So I wanted a good miner poison deck, and after a lot of digging, I found this one on a Cwa vid. This deck can defend even the biggest of pushes, while also allowing you to exert pressure constantly on your opponent’s towers. This deck performs really well on the ladder, but even better in challenges. With that, let’s get into the guide! 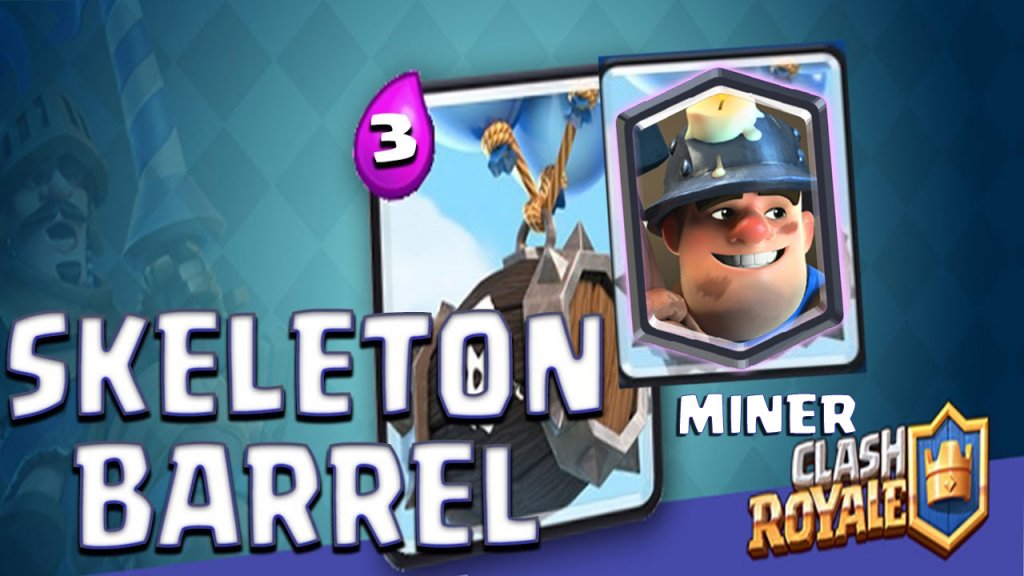 As you might know,  Miner is my favorite win condition and has his own niche in the meta currently. Some miner decks use miner to tank for small, squishy, and cheap swarm cards. This deck is no different, except for your Miner tanking for your Skele Barrel.

At the beginning of a match, do not miner a tower. They can put down a pump, or a princess. If you poisoned the pump, and you want to the miner, always do it in the anti-tornado area. For the people who don’t know, that is the closest tile that is directly touching the tower, on the outermost side of the tower. If this made absolutely zero sense at all, just search it up.

Bandit – Your second most win condition.

This card has insane versatility, being able to do 320 damage with only a bit of health. Given the choice, always deploy your bandit so she can dash, as her dash damage is double, and her speed is a lot quicker.

But on the offense, you can bridgespam with her if your opponent drops their golem/pekka/mk/gs/rg in the back. If you are in a situation where you are behind 1000 damage in double or normal, you can bridgespam this with miner tanking, bats, or the Skele barrel.

Skele Barrel –  An all around great card, on offense and defense.

Defense – You might not know it, but this card is a really good defensive card. It is one of the best fireball killers, as ewiz, exe, wiz, ice wiz, etc all of them can hit it, and once the barrel explodes, the skeles automatically surround the troop, denying splashing troops. This can also be used on defense to tank while the tower kills the high damage single target troops, example inferno drag or mega minon.

Offence – Obviously can be used on offence!

Since this card is relatively new to the Meta, not everyone knows about the drop time. Many people preemptively  zap/ arrows, and you can get 2000-1000 damage on the tower.  Unless they have a minon horde and zap, don’t be afraid to keep on the pressure with Skele barrel and bats. 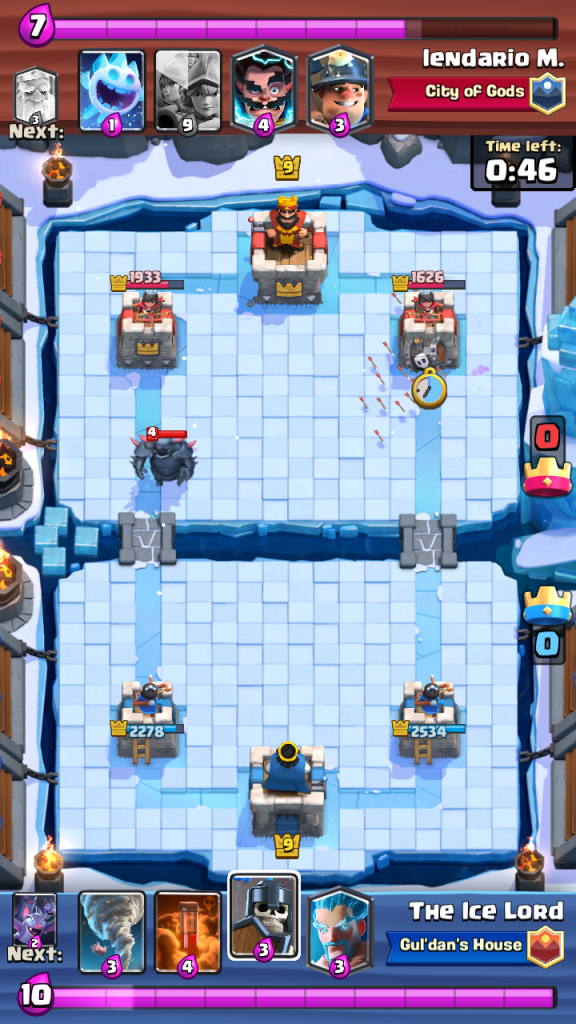 This is one of the best defensive cards, as even if they zap, it still can burn up golems. If your facing golem nw, what I like to do is in double elixir, I like to poison, to try to kill the bats so my inferno drag can kill the golem.

Bats – I would say one of the best common cards in the game.

Even with Zap in the Meta, this card does amazing. If you know they have their zap, I would purposely play them on one side to act as zap bait, and then bridgespam a Skele Barrel.

If I had the starting hand of guards, bats, miner, and bandit, I would play the bandit because both bats and guards have so much value for this deck. Bats are 1 of only 2 air counters (besides spells), which means spend your bats wisely. With baby drag/ fireballies, If you have no other counters, inferno drag does ok against them.

With the recent buff, these things are insane. They can do everything for 3 elixir. They can stop miners, tank air troops, kill fireballies, also while being slightly ranged. If you have leftover guards, miner, Skele barrel or bandit can translate into a dangerous counterpush.

Poison – Your heavy spell of the deck.

You really aren’t going to be relying on the poison for spell cycling, but it works for everything else. If you need 500 or so damage, miner poison does wonderfully. Also, If you know they don’t have pump, I would poison fireballies if they put down anything else for value.

Zap – What needs to be said about this card?

This is definitely where this deck shines the most. As a 3.0 average elixir, this out cycles most decks besides bait, and some choice hog or mortar decks. That means you can out cycle their zap/arrows/log, which means they are going to end up defending with your skele barrel with bad counters. I would continually cycle miner, bandit, or Skele barrel, and counterpush with one of these if there are leftover bats or guards from a defense.

This deck has really solid defense, and 3 times out of 4 your can defend for a draw. If you have damage on both towers, split push, because then you can maximize your damage output. If they score a tower on you, and you already have a tower, I have won a lot of games just by dropping bandit, skele barrel, and miner at the middle.

This is probably the easiest matchup. With Inferno drag, you pretty much shut down the golem/ pekka with ease. With the especially popular ghost golem deck, you have miner and poison to kill the hut, guards/ bats for the ghost, and inferno drag for the golem.  Unless they play really well, this archetype is pretty easy to win with.

One of the tougher ones. With fast mortar cycle deck, your only ground cards are guards, miner, and bandit. (yes technically Skele barrel, but you can’t use it to block a mortar shot.)

Especially if you use miner, they can catch it with a knight.

With xbow, it is not as hard to win, but definitely a challenge.  I would probably poison and bandit, or skele barrel.

This isn’t that hard, but if they can outcycle your counters for their win condition, you might be in a little bit of trouble. Most deck cycle at the same speed, so just cycle as fast as you can, to try to outcycle their counters.

Since this deck also has an element of control, your just going to be going back and forth. My best tip is don’t make any bad plays, and split push to catch them off guard.

This is a really nice matchup, as the only problem you have is if they stop you bats/inferno drag with a zap. But other than that, just don’t waste your inferno drag in bad places.

Since you have zap, bats and guards for their barrel, and poison and miner for their princess, this is a really easy win. I would just save your zap, and don’t let them rocket cycle you out.

With this matchup you can hard counter them, and, you can drop a bandit right under their guard. With this, your looking to bait out their zap with bats, punish with skele barrel, and poison the GY.

A really dead archetype, But hey, you might face this. If they are going old school archers barbs furnace, you can inferno drag the RG, MK the barbs, and miner/ poison the furnace.

So that was the guide! If you have any questions email me at maxnguyen3012@gmail.com! Hope you have fun playing the deck.