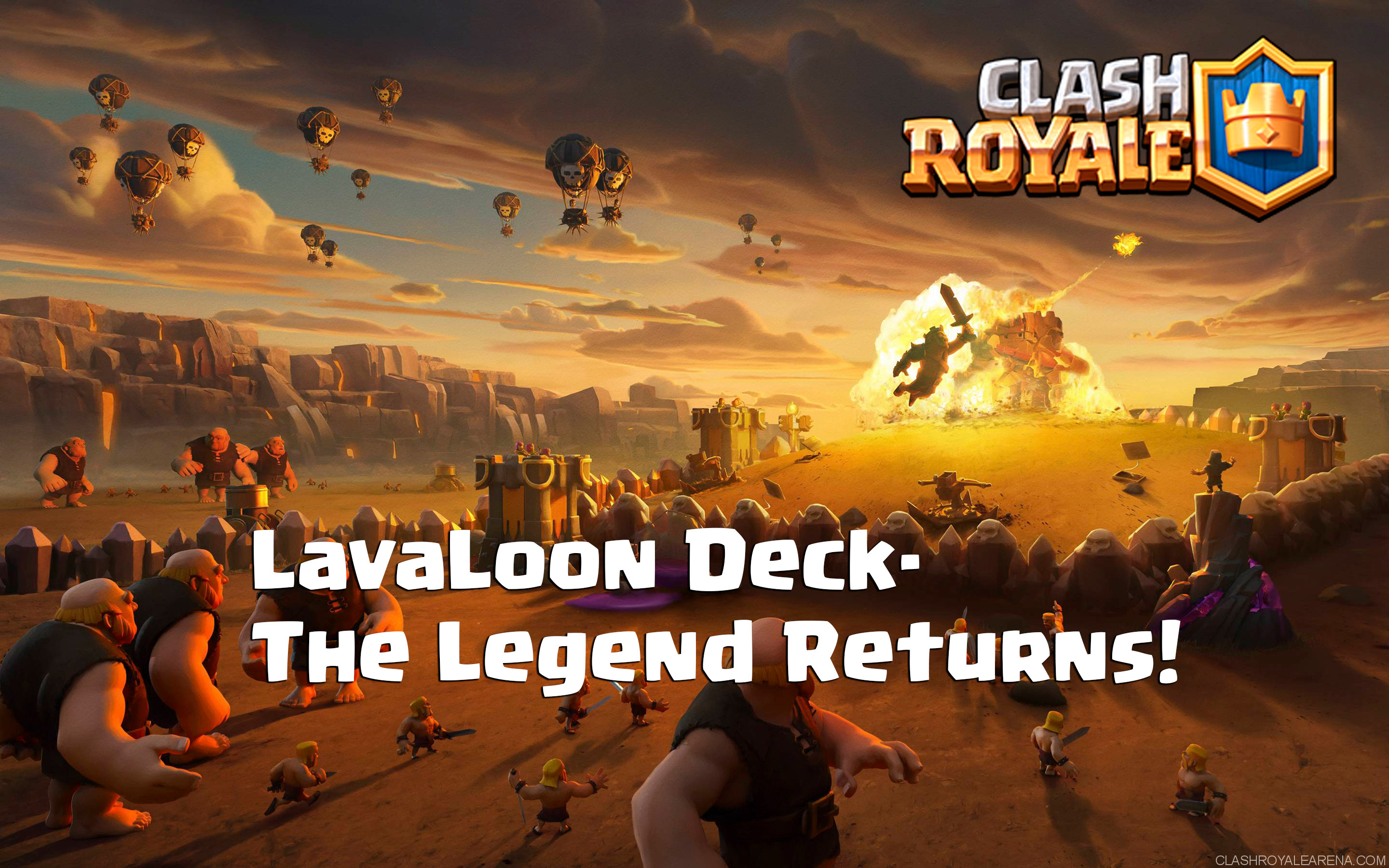 Hey guys! Kure©® here again! Do I have a question for you all: Remember LavaLoon? Its use rate decreased massively after the Bridge Spam Meta began. However, now that Bridge Spam has completely disappeared on the ladder, LavaLoon can almost make a comeback! The only reason it can’t is because of Mega Knight! But, that will all change starting today! Why? Because I’ve made a LavaLoon deck that can counter the Mega Knight! Seriously, I think I’ve created a new Meta deck! Take a look!

Lava Hound: We all know that this is the main tank of your deck. It has a TON of health, meaning it is more than enough to tank for your Balloon. The other reason it is the best tank for the Balloon is because they both fly and target buildings, meaning that none of them are distracted by ground troops. The Lava Hound also splits into six, count them, SIX Lava Pups upon death, meaning that you can inflict even more damage in just one push! You can even use the Balloon to tank for the Pups! Pups are also useful if you need anti-air troops taken out, like eWiz, Inferno Dragon, or even Executioner, as the Pups are spread out! Overall, Lava Hound still is, and will be, a super good card!

Balloon: Your win condition. As mentioned in the Lava Hound section, it double-functions as a tank for Pups. It can also get to the Arena Tower and inflict huge damage! Not only that, the Balloon drops a bomb upon death, dealing Area damage that can kill or really hurt quite a lot of troops! As surprising as this sounds, this aspect of the Balloon makes it decent, although not the best card, to use on defense.

Bats: Of course! Why wouldn’t I put Bats in LavaLoon?!? They’re cheap, expendable in every way, and have an INSANE amount of DPS! Also, they counter all air troops except Baby Dragon better than the Minions, for a cheaper price too! However, the most amazing part about them is that you can surround an area damaging ground troop like Wizard or Exe, and they will only be able to target one Bat at a time! (Disclaimer: Does not work on Witch. Her attack speed is too high, and the Skeletons spawned distract some of the Bats.)

Mega Minion: One of the most useful cards to ever be put in a LavaLoon deck. It’s high damage and decent HP means that it can counter cards that the Bats can’t counter, like Baby Dragon. It also makes for good push support. It can help to protect Balloon from Minion Horde and other anti-air units when combined with spells. It is also one of your two Mega Knight counters, the other being Mini P.E.K.K.A.

Mini P.E.K.K.A: This is the card that sets this deck apart from other LavaLoons. Mini P.E.K.K.A is a much better defensive card than the original LavaLoon’s Goblin Gang because it deals higher damage per hit, and its high health means it isn’t susceptible to low damaging spells like the Gang is. It is also your other counter to the dreaded Mega Knight.

Tombstone: A staple in any LavaLoon deck. It provides so much versatility on defense, distracting dangerous threat cards so the Mini P.E.K.K.A can kill them. Sometimes, the spawned Skeletons can pile up in one lane if you pushed down it, which forces the opponent to use a spell on the piled up Skeletons. This makes things easier for you on defense.

Fireball: Aaaaaaaaaand… Fireball! This card is used on both offense and defense. On offense, It kills Minion Horde and really hurts anti air troops. It can also be used with Zap to kill such cards as well as to obliterate the Three Musketeers before they do any significant damage. Overall, it’s mostly self explanatory.

3:00-1:00: Always start off on the defensive, as with any LavaLoon. Shut down the pushes of your foes, then start a push of your own. You will have Bats and other cheap cards to deal with rush attacks on the other lane, as well as Mega Minion, which can be dangerous on offense!

1:00-End: Now you should establish your LavaLoon push. When supported well, a well timed push can take the Tower! Also keep your Tombstone and Mini P.E.K.K.A on reserve for rush attacks to the other lane.

Giant: Tombstone can kite the Giant, and Bats, Mega Minion, or Mini P.E.K.K.A can kill it. Be wary of support spells!
Golem: If their starting move is a Golem in the back or a Pump, and you have a Balloon in your starting hand, send it down the opposite lane. That will get him to spend his Elixir, making defending easier. For Golem, use Mega Minion, Tombstone, or Mini P.E.K.K.A.

P.E.K.K.A: The Tombstone can keep her occupied for quite a while. Just be sure to place it once she crosses the bridge. Use Mega Minion to kill the P.E.K.K.A, and start a counter push if it’s Double Elixir.

Royal Giant: Ok, I admit. You’re gonna take some damage. Your job is to mitigate it by placing Mini P.E.K.K.A once he crosses the bridge, for he kills RG the quickest. For any Ebola Barbarians, use Tombstone+Mega Minion.

Hog: Tombstone and the Mini P.E.K.K.A are great Hog counters. When using MP, be sure you place him in a position where Hog won’t get a swing. If a spell is used at all, send your Bats.

Spell Bait: Zap the Barrels, and use Mega Minion or Bats on anything else. Using Inferno Tower distractions will definitely fare well for you.

Miner Poison: Mini P.E.K.K.A will definitely work against Miner Poison for a positive trade. Bats and Mega Minion also work on anything the Miner may be tanking for.

3M: Zap+Fireball is your go-to method of eliminating them. You can also use your Mini P.E.K.K.A to chop up the Ram or any mini tanks, and Bats/MM to distract.

Mega Knight: The dreaded new card that would’ve wrecked LavaLoon before Bridge Spam. With all of its counters being swarms, it would’ve had serious issues. But, this deck has Mini P.E.K.K.A! It can chop right through MK with the help of Bats, and Mega Minion or Tombstone works on just about anything else!

So that’s all for this guide! Leave a comment if you liked it, or if you think it should be meta too! See y’all next time! 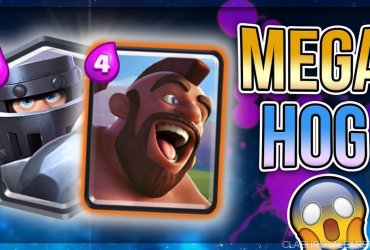 Card Roles Battle Ram: Your tank. Pair this with the Graveyard for a deadly push that must be defended. Graveyard: Your win condition. Play this card smartly and pair it … 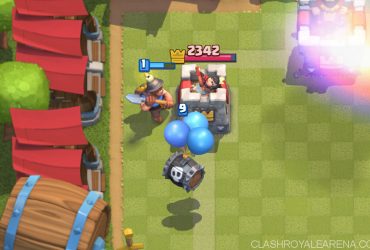 Hey guys! It’s NebulaNoodle back at it again with another deck guide. Here’s a quirky little Miner chip control deck that I want to show to you all that I …