I’ve been trying this deck out on ladder and challenges and so far I’ve only lost 1 out of every 5 matches or so.

I’ve also used this to get the “Play x commons in ladder” quests on my 2nd account done in just one game! If you’re an F2P pusher or just want a deck for completing quests quickly, please give my deck a try! 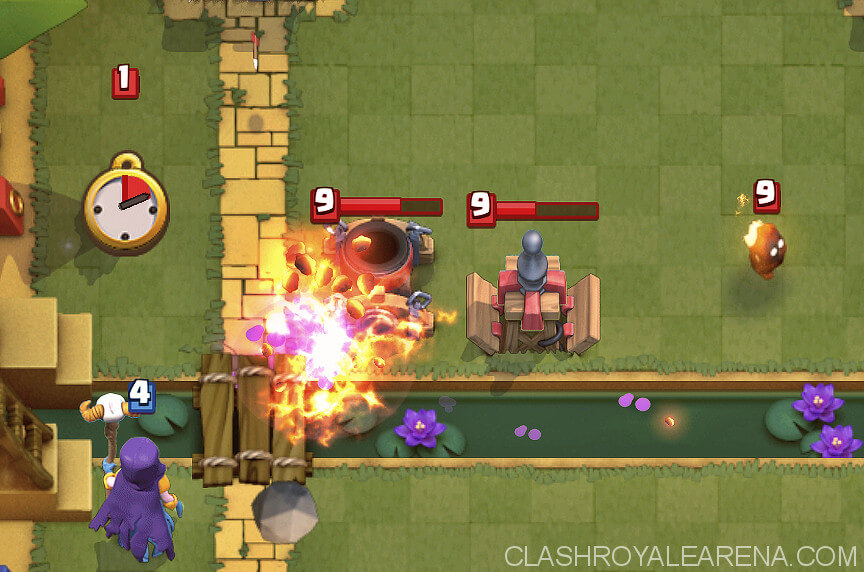 Mortar: Hard to have a Mortar deck without a Mortar, right?

A lot of Mortar players use the Mortar on defense when facing heavy decks like Lavaloon and Royal Giant. Although the Mortar is pretty good on defense, though, it’s your only win condition in this deck and using it on defense means you’ve got to cycle another 4 cards until you can push again. Use this card only on offence!

Tip: Below are the best placements for you to put down your Mortar. The one next to the river should only be used if you’ve lost a Tower or if there’s another Mortar down on the popular position.

Your true defense against building seekers. Also effective at guarding your Mortar from enemy attacks.

With its recent buff, the Tesla deals approximately the same damage as the Night Witch. Use it in the center to defend yourself from Golems, Giants, Lava Hounds and Hog Riders. You can also use the Tesla to kill Giant Skeletons- it’ll hide before the bomb explodes!

Tip: When you’re countering a push with Tesla, try to put it so that it defends your Mortar if it survives the attack.

Knight: Even when you’re defending, you still need a tank.

Only costing 3 Elixir, the Knight provides cheap but effective tanking for your Mortar while ranged defenders like the Tesla and Archers clean up the mess.

Although you could swap him for the cheaper Ice Golem, his sword can come in handy against glass cannons or other mini-tanks like the Battle Ram and Valkyrie.

Archers: These ranged sharpshooters pick off Mortar crushers from a safe distance.

Archers are effective when paired with Knight- they pick off air troops and swarms while the Knight distracts melee tanks.

Their range also allows them to shoot from behind the Mortar, and because they come in pairs they can be split evenly behind your King Tower.

They’re also unloggable, but only if you keep them levelled up!

Tip: Apart from your Tesla, Archers are the only troop/building in this deck that can attack air troops without committing suicide. If you’re facing Lava Hound decks, consider saving them for the Hound.

Skeletons: Does practically nothing but allows you to cycle to your next card.

They can absorb Bandit dashes and surround Sparky, too. They’re also helpful against building chasers like the Giant, Hog and Battle Ram but that’s just about it.

Use them to cycle to a more powerful defense or to your Mortar while providing a momentary distraction.

Tornado: When this card meets Mortar you’ve got more options than ever.

Most of the time, Tornado is used to pull troops like Gob Barrel and Hog to the King or to stall a Lavaloon/Mega Knight push for a couple of seconds.

In this deck, though, the Tornado can be used to pull enemy troops towards their own Tower so that your Mortar can wipe them both with splash damage.

It can also be paired with Ice Spirit to easily Freeze an entire push, too.

Tip: For more info on the Tornado’s various uses, see this guide!

The Log: Great for thinning out swarms and fighting Spell Bait

Not much to say here, I’m quite sure you guys all know how to use Log. If you’re facing something other than Log Bait, use it for chip damage and stalling.

It also serves as a soft counter to Minion Horde and Mega Knight. If you’re worried about its low HP, predict placing it beside your Mortar may be a good idea- whatever troops your enemy places will be frozen before they finish deploying!

Tip: Ice Spirit and Skeletons can send a Mega Knight jumping right at your King Tower for a whopping +5 Elixir trade!

Placing your Mortar right at the start of a battle is a risky move because you don’t know what your opponent has in store for you.

Try to start with a passive move (e.g. split Archers) or a chip attack (e.g. Skeletons + Ice Spirit) to force your opponent to make their move first. Start placing your Mortar once you have a good idea of your opponent’s deck.

Unless you’re facing a troll, use your Mortar conservatively, putting it down only when there are already a lot of support units to protect it.

Think of your Mortar like an X-Bow- if you overspend even one Elixir, you might lose both your Mortar and your Tower, and that’s not good.

This is an example of a lost battle caused by overspending.

When my opponent pumped up, I assumed he was running a heavy deck and tried to punish him with my Mortar. Unfortunately I wasn’t able to prepare for the following P.E.K.K.A-Graveyard push and lost my Tower.

This is where you start showing off your spectacular cycle power.

It’s OK to lose a Mortar once in a while because you can outcycle them and get another one before your opponent plays their counter again, so try to keep up a constant barrage of artillery on the opponent’s Tower!

If your opponent saves up enough Elixir for a heavy push, don’t be afraid- you’ve got twice as much Elixir to defend, too.

If you meet this deck archetype, you’ve already won. Because most Hog Cycle decks nowadays use Rocket, your deck is going to be a lot cheaper. If you keep out cycling them and stopping their Hogs with Tesla, the game is going to be pretty hard to lose.

Spell Bait is also pretty easy because you’re able to cycle Log faster than they can get to their Gob Barrel or Gang. If you put down your Mortars in the first position mentioned above, it’s going to be pretty hard getting an Inferno locked on your Mortar.

Tesla effectively counters Mortar for an even trade. Knight and Ice Spirit are both very good at distracting Mortar, and Archers can pick it off easily. Use your opponent’s minitank to counterpush.

Easy matchup, just drag the Miner to the King Tower once and defense is almost over. Don’t be afraid to place Archers inside Poison Spells- they’re a lot tougher than they look.

All three of these win conditions are slow and heavy cards.

Easily distracted by Skeletons, Ice Spirit and Knight, you can count on these cards to stall your units while you gather Elixir for a protected Mortar counterattack.

You’ll be safe as long as you don’t make big mistakes while defending.

Although countering air decks can be a tricky job with this deck, your Tesla can usually survive one hit from both Lava Hound and Balloon.

Luckily for you, though, there are less distractions for your Mortar, too.

Here’s where things start getting tricky. Stay calm and trust your Tesla to take out the Golem while you use your Knight, Tornado and Ice Spirit to stall the support.

Use their deck’s heaviness to your advantage by spamming Mortars.

Since Graveyard completely ignores your defensive troops, it may end up giving you trouble if the P.E.K.K.A isn’t dealt with first.

Luck usually determines whether you win or not.

A skilled 3M player will realize that you don’t have any heavy spells and try to make short work of you with a grouped 3M beatdown.

To prevent their Musketeers from wreaking havoc, rapidly cycle all your splash attackers (Log, Ice Spirit, Tornado, and defensive Mortar) to kill them.

Your chance for victory will come only if you cycle like hell.

Tip: Mastering 3M decks is a pretty good idea if you want to counter them.

These decks are rare, but if you meet them you’re in for a bad time.

Since the P.E.K.K.A deals with high-HP defences like Knight and the Mega Knight kills swarms, your only hope is getting a Tower down before your opponent musters up the Elixir for a push with both of them.

Thank you all for taking the time to read this 1,547-word guide. Good luck with your quests and trophies!