Hi guys, its Victorapple here with another fun deck to try out! I’m a big fan of off-meta or interesting decks, and this is a completely original deck that I decided to try out after receiving 431 Mortars from my Giant Chest.

I call it Surprise Beatdown Mortar Deck; your opponents think its a normal Mortar Siege Deck, until you reveal your Trump Card: Royal Giant! 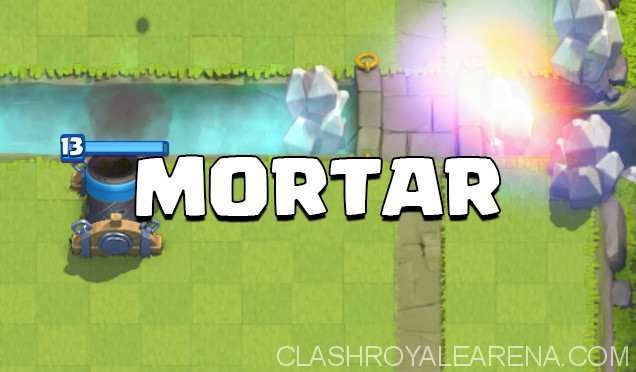 I choose Royal Giant as my surprise card, because of its range. Less time for your opponent to recover from his shock.

Mortar: Staple of this deck. For the early parts of the match and for the majority of the match, this is your go-to for trying to take down a tower. X-Bow is more powerful for siege decks, but Mortar is cheaper, so its easier to gain a positive elixir trade when defending your Mortar. Usually you will want your Mortar to get at least 2-3 hits on the tower for a good poke. Most of your other cards (except Royal Giant of course) is used to defend Mortar till the very end. Mortar is also a common card, so feel free to overlevel it as well if you wish.

Below are the best Mortar placements you will want to use: 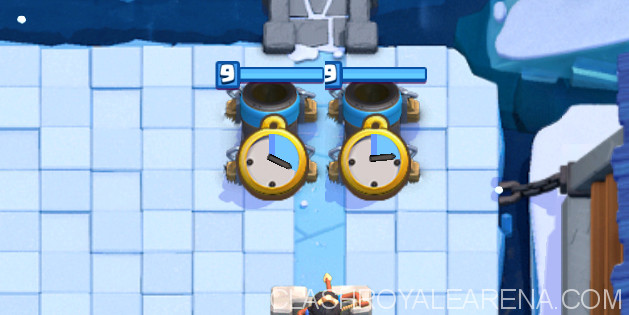 Royal Giant: The second staple of this deck. I never play this card down at all until double-elixir, or if I get a golden opportunity when enemy elixir is low and I have a chance to make a great counterpush. Otherwise, I hang onto it for element of surprise, when my enemies aren’t expecting him, so he can deal tons and tons of damage to the tower.

Inferno Tower: Commonly found in Siege decks, but usually not in Royal Giant decks. Siege decks lack the power to take down heavy tanks, which Inferno Tower does nicely. With this in the deck, it really sells the illusion that your deck is a Siege Deck instead of the Surprise Deck it really is! Also great for countering Hogs and Elite Barbarians and such.

Skeleton Army: Another great defensive card. Perfect for distracting any troop that they try to use to destroy your Mortar. This includes Elite Barbarians, Hog Rider, Mini-P.E.K.K.A, Musketeer, or Electro Wizard. People may try to use Inferno Tower or other defensive buildings to take out your Mortar, so once you figure out what your opponents counter to your Mortar, you can prepare for the right card to counter it.

Mega Minion: The Mini-P.E.K.K.A of the air. In addition to whatever Mini-P.E.K.K.A can counter, Mega Minion also helps stop Minions or other Mega Minions, or even Baby Dragons and Balloons. With Minion Horders, you’ll want to use Fireball or Zap. No one uses Lava Hound to counter Mortar. Read more about Mega Minion at here.

Fireball: Pretty standard, I really don’t need to explain this card. Counters other things like Barbarians or Minion Hordes. Also great for finishing off towers. One cool thing is if your opponent places down, say, a Musketeer in the back, you can place a Mortar down in the same lane to target their tower. The extra splash radius of the Mortar will hit the Musketeer when timed right, allowing you to finish off that Musketeer with a Fireball.

Zap: Also pretty standard, I also really don’t need to explain this card. Counters other things like Goblins or Skeleton Army. Spear Goblins or Archers just die from a Mortar shot, so there’s no need to worry. Also helps reset Sparkys and stuff.

No Legendaries, all Commons and Rares except one Epic. Sub in your Legendaries or whatever however you wish.

Pre Double Elixir play this deck like a Siege Deck.

Siege Decks are hard to play, as you need to know what cards they have to counter your Siege Building, and preemptively place down something to counter it.

Please refrain from using your Royal Giant at all, cause once you use it you waste the element of surprise.

Double Elixir is the Royal Giant’s time to shine.

When the moment is right, place down your Royal Giant at the Bridge, and let the carnage begin!

The first time you place the Royal Giant is your best moment to deal serious damage, as they’ll never expect it.

Because of that, they may not have any counters to it ready, as they have probably used it on a Mortar!

Did they just try to use Elite Barbarians to take out your Mortar? Well, they no longer have those (Rage starts here) O-P-A-F annoying cards that almost everyone uses (Rage ends here) troops to counter your Royal Giant! Then proceed to support your Royal Giants with everything you got, and take down that tower!

After using Royal Giant, the element of surprise will be gone, as now your opponent will be expecting another Royal Giant.

Now play the deck naturally with Royal Giant, mixing up Royal Giant and Mortar as your win-condition.

Common Counter and How to Deal With

These counters apply to both Royal Giant and Mortar.

Thank you for reading my guide! If you’re also a fan of off-meta decks share some ideas as well!.