This deck was made by yours truly and is unique from a lot of the meta Hog decks. This deck uses the Dart Goblin, an underrated, cheap and versatile card that synergies and pig pushes well with the Hog Rider.

I’ve been using this deck over 4000 trophies and I’ve been having success pushing up the ladder.

I hope you guys enjoy my guide on my own Dart Hog Mini P.E.K.K.A. cycle deck! 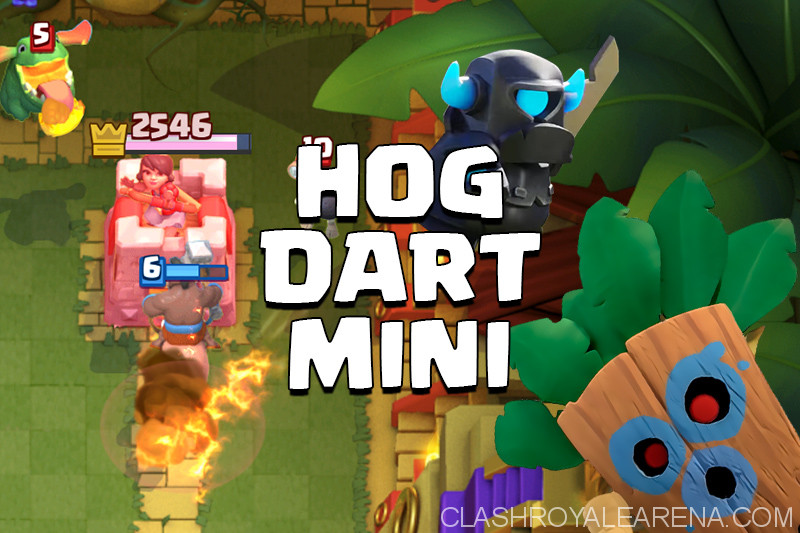 Hog Rider: Your win condition in the deck. As its only 4 Elixir and offers a lot of value, I think it’s one of the best offensive cards in the game.

Mini P.E.K.K.A: Your main defense in the deck. Although it doesn’t see much usage at the moment, it’s a very versatile card that synergizes well in Hog decks.

Dart Goblin: 3 Elixir, versatile support card to aid on offensive and defensive cards. IMO an underrated card that synergizes well with the Hog.

Ice Golem: IMO one of the best cards in the game even after its nerf. For 2 Elixir it offers so much value. Defensively it can be used to soak up damage, kite troops, and with its death damage kill small troops such as Skeletons, or lower the health of Goblins and Minions. Also synergizes extremely well with the Hog Rider.

Ice Spirit: Cheap, 1 Elixir value card that can be used defensively and offensively in combos with the Hog Rider. Creates a lot of positive Elixir trades.

Fireball: 4 Elixir spell that is good defensively and offensively with the Hog Rider.

The Log: Due to the zap nerf, The Log is your second spell in the deck. It is such a great spell on offence and defense especially with the expected Goblin Barrel meta incoming.


Your general offensive Gameplan is to cycle small Hog pushes with cards that synergize well with the Hog. Some common Hog combos in this deck are:

These are mainly the pushes you will be performing in game as it is a Hog cycle deck. If you can’t get past their defense, you can try to out cycle their defense by cycling cards such as Ice Spirit, ice Golem, Dart Goblin, etc. Our cycling your opponents defense works best in double Elixir.

The Cannon is your defensive support for the Mini P.E.K.K.A. at taking out tanks.

The Dart Goblin is your support card to aid on defensive pushes.

The Fireball + The Log combo are great defensively at taking out swarms and getting value.

The Hog Rider can be used in certain situations to distract and pull enemy troops by Hog pulling.

Golem/Lava Hound decks: On offense, you should Hog push right after they’ve dropped their big tank. Hog + ice Golem is a recommended push that doesn’t cost too much Elixir but will rush them and force out a lot of cards. Golems and Lava Hounds are expensive so they won’t have a lot of Elixir to defend you if you rush them. Another benefit to this is that it splits up his push, forcing out cards on the opposite lane weakening his Lava Hound or Golem push. Then by the time the tank reaches the bridge you’ll be able to set up the Cannon and Mini P.E.K.K.A. to defend against the push. Try not to clump up troops together to eliminate them from getting a valuable Lightning or Fireball.

Miner decks: Try to eliminate as much chip damage as possible. Don’t spend too much Elixir on your pushes, try to build an Elixir advantage. Also, don’t underestimate small miner pushes. The miner tanking for Skeletons can even be deadly!

Zap bait decks: Fireball and The Log are great counters to the meta cards in zap bait decks such as Minion horde, Skeleton Army, Goblin Barrel, etc. Be careful when using spells on offense in combos with the Hog. As you are playing against spell bait, it may come back to bite you.

Hog Rider decks: In a Hog vs Hog matchup it is important to stay ahead on the chip game and build an Elixir advantage to eventually be able to out cycle their defense. The Cannon is a great counter to the Hog Rider as it’s a positive Elixir trade🍊! Mini P.E.K.K.A. is a good counter as well however normally leaving the Hog with one hit.

Elite Barbarians decks: This card is a very popular and strong card in the meta right now even after its nerf. However, our deck has some good counters to it, for example: – Ice Golem + Dart Goblin – Ice Golem + Mini P.E.K.K.A. – Mini P.E.K.K.A + Ice Spirit – Mini P.E.K.K.A. + The Log – Fireball + Ice Spirit – Fireball + The Log Try not to go too aggressive if his elite barbs are in cycle. Use your Elixir wisely. Always try to save enough Elixir to be able to counter their elite Barbarians.

Royal Giant decks: Probably my least favourite card in the game especially on ladder just because of how much I get over levelled by it. However, Cannon + Mini P.E.K.K.A. is a great counter to the Royal Giant. You can use other troops such as ice Golem, Ice Spirit, and Dart Goblin to distract and take out the back line of the push.

I hope you guys enjoyed my guide on my own Dart Hog Mini P.E.K.K.A. Cycle deck!

This is a deck that has a lot of the meta cards mixed in with some unique and underrated cards at the moment.

I hope you guys will have a chance to try out this deck because I certainly had success pushing up the ladder with it.

If you enjoyed my guide, an up-vote would be greatly appreciated.

Please leave any comments below about any questions or concerns you have about my deck. Thanks so much for taking your time to read my guide!