It’s me Zigge here with the Miner Tornado Rocket Deck for you guys!

This is the fourth guide of the CRA Birthday Special.

Here we have a Miner Rocket Control deck which works very well in Challenges because of the three minutes of overtime. Let’s see how it works! 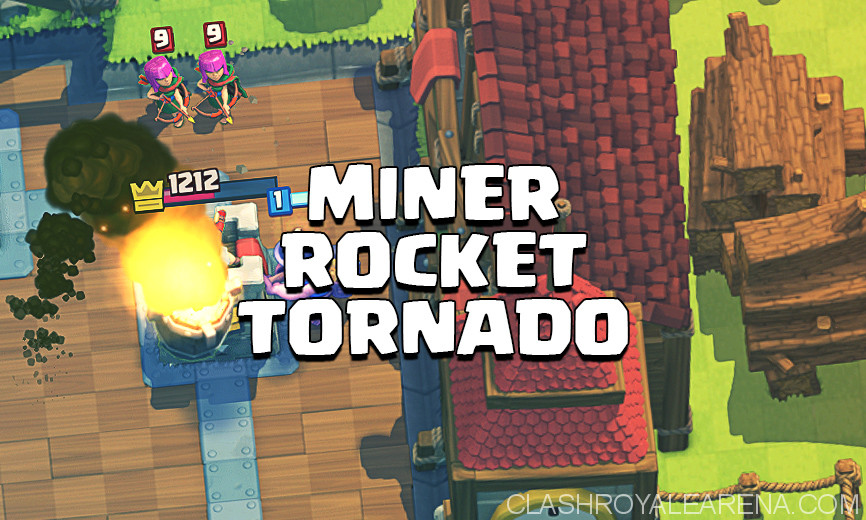 Miner – Miner is the core of this deck. Use him to chip away at your opponents tower dealing 448 damage if left unattended. He can also take out glass cannons like Musketeer and Wizard. The main push is Miner + Ice Spirit and/or Minions or Guards. Use a Rocket as prediction if you know their counter is Barbarians or Elite Barbarians.

Quick Tip: If their counter is some sort of Barbarians, place your Miner at the same spot a couple of times, this will have them put their barbarians right there when you rocket.

Rocket – The Rocket is your main card to kill opponents glass cannons. Make sure to catch their tower too if they place a troop in the back. The Rocket is also excellent for taking out an Elixir Pump, but be fast, If you need 3 more Elixir for casting your Rocket, their Pump will have pumped up one Elixir, setting you at an Elixir disadvantage if you Rocket it, but an even larger Elixir disadvantage if you don’t.

Only rocket troops that cost 4+, this will result in you doing 493 damage to a tower for 2 Elixir. If you attack the opposite side they place their troop in, only rocket a 5+ Elixir card. If you know that your defense is solid an your opponent has no chance to destroy your tower, only rocket a 6+ Elixir card.

Note: The Rocket can work as an emergency His very unique slowdown effect makes him a good counter for slow attack speed cards like;option for killing Elite Barbarians, but they’re fast, so don’t miss.

Ice Spirit – I don’t have to explain do I?

Bowler – The Bowler is such an amazing card in the current Meta. He is very good against Hog Rider, Tombstone, Elite Barbarians etc. He is decent against a Graveyard if placed correctly. He is basically your defensive meat shield. He can soak up a lot of damage and still do his pushback effect against medium sized units.

The Bowler is a very good card for underleveled players as his pushback effect doesn’t increase. Only his hitpoints and damage. His slow movement speed isn’t solely a bad thing because he can be placed in the back and at the time he walks up, you will have enough Elixir for a big Miner push in front. Or you can place him in a weaker lane and wait out your opponent.

Note: The Bowler is also a great card for countering spawner decks. He will kill the Spear Goblins in one hit and push back the Barbarians.

Minions – They work very well with Miner because of their fast speed and high DPS. While the Miner tank they can deal over a lot of damage, even if just one or two of them survives.

Minions can also counter a lot of troops. They can alone shut down all of these cards and many more;

Ice Wizard – The Ice Wizard works very well with the Bowler because of his slowing effect. Most of the troops in the game can’t even reach the Bowler before they’re dead. The Ice Wizard has more health than other glass cannons so he can survive a Prince charge or a Fireball one level higher (You won’t face that as this is a Challenge deck).

His very unique slowdown effect makes him a good counter for slow attack speed cards like;

His splash damage effect also makes him good against;

With his high HP he can counter other units like;

Guards – The Guards are one of the best ”blockers” in the game. This means that they can block units like Prince, Mini P.E.K.K.A etc.


Guards also work well with the Miner.  They are pretty hard to kill without a tower assisting so that will put your opponent in a difficult position. They are very easy to use so there’s not much more to say about them but if you’re really unsure on how to use them, go check out this.

Tornado – The Tornado is very unique card due to its ability to drag units, big or small. It works very well with the Fireball because it can pull Three Musketeer to one side if they split them. You can then Rocket the Three Musketeers + what they put in front to to tank.

The Tornado is easy to use but there’s many advanced tricks for the experienced. If you wanna learn two of those, check this out.

Play it safe and don’t overcommit on offense. Place your Bowler in the lane with your weaker tower. Be careful with your Rocket. This deck is pretty hard to use so test it in Friendly Battles before wasting your 100 Gems on a Grand Challenge then get 0 wins.

Make small pushes with your Miner. In 2x Elixir you can start making bigger counterpushes, yolo rocket and apply pressure. This deck runs no defensive building so it’s pretty weak to Golem and Giant decks.

Against fast decks there should be no problem. Just play it safe and you will chip them out in the long run.

When do I use my Tornado?

Use the Tornado like a mix between Zap and Arrows. ”Tornadoing” a Skeleton Army is not a good idea. It’s an equal Elixir trade and you might need your Tornado for other things. Instead, use your Skeletons to pull the Skarmy to the middle, allowing both tower to shoot it down.

I like to think of the Tornado as a 3 Elixir, non-insant Zap. Which means it’s kinda bad right? Yeah, if you just think of the damage. The pull ability is where you get the value.

But I agree, the Tornado needs a huge buff.

When do I use my Miner?

When you have it and are not defending.

Basically what I pair with my Miner 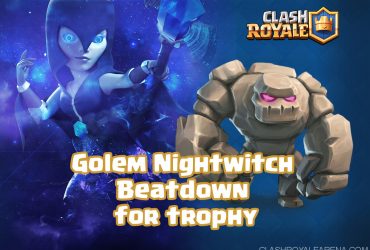 What Up fam! Hybrid FTW here for my very first guide on CRA! I found this deck in a top players battle deck and have been crushing with it ever … 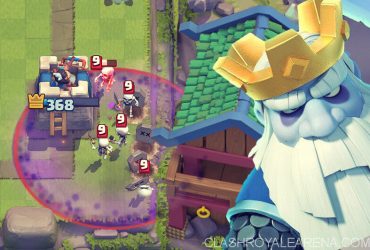