I am here to bring you the new Miner Mini P.E.K.K.A Poison Deck, which successfully helped push from 2300 trophies to 3200 trophies. This is a comprehensive guide so be prepare before reading lots of tips and tricks! 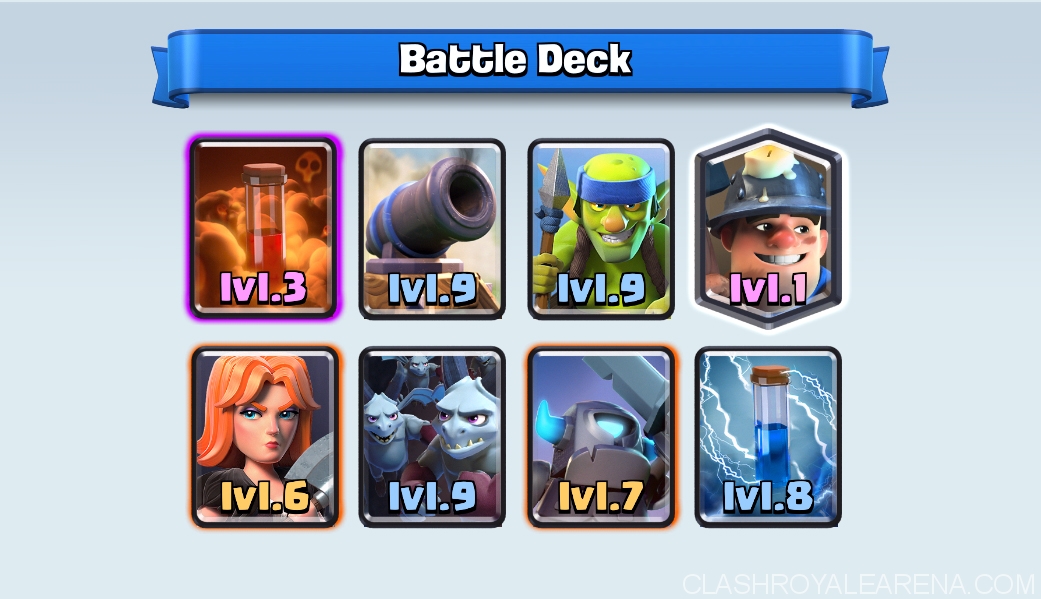 Miner – This is the star of the deck. As many of you know, the Miner’s main purpose is to prevent the crown tower from helping eliminate incoming troops. It can also take out Elixir collectors, spawners, and even serve on defense in emergencies. A very versatile card, it is the ultimate counter pusher. This card can not be replaced due to its unique ability.

Mini P.E.K.K.A – Not only is this a scary rush with the Miner, this card is the beast on defense. Royal Giants, Golems, Giant Balloon, this card will stop them all! It can also serve as a hog stopper when you can not pull out your Cannon. And after its perfect defense, add in the Miner and you’ll have a deadly counter push. This is a “Glass Cannon” meaning it does massive damage, however can be easily countered, however there are multiple cards in this deck that will prevent this. This card can not be replaced.

Valkyrie – This card and Mini P.E.K.K.A are your two defensive cards. These 2 cards combined will take out almost any push: Double Prince, Royal Giant, Golem P.E.K.K.A, Hog Rider Barbarians. Not only that, but again, it sets up a great counter push. The Valkyrie will also nuke supporting troops behind a tank unit while the Mini P.E.K.K.A chops down the tank. Again, very versatile card and something that your opponent can not ignore. This card can not be replaced.

Spear Goblins – For the cost of 2 Elixir, these guys will deal massive damage, especially with the Miner. Paired with the Miner, these guys will do a total of 1500 damage to a tower if left alone meaning your opponent can not ignore your cheap 5 Elixir push. Often, your opponent will panic with expensive troops or spells giving you an Elixir advantage right of the bat. This troops can be replaced by other troops such as archers, melee Goblins, or even 3 Elixir Minions, however I choose this troop due to its ranged ability and fast speed forcing your opponent to react quick otherwise their tower will suffer.

Poison – This card may very well be the card that earns you the win. Slowing down their tower and disabling them of placing cheap troops, this card is deadly with Miner + Mini P.E.K.K.A. However, keep in mind, this card is one of 2 cards that will deal with Minion Horde effectively, so you may want to save it if your opponent has one. On defense, it is excellent at stopping the Lava Pups in their tracks as well as a barbarian horde. This card is also excellent at stopping spawner decks in their tracks so you will never have to worry about decks as annoying as those! You can replace this card with a Fireball, Rocket (if you encounter xbow, mortar, or sparky decks often, however keep in mind you will have to use it against Minion Horde), Arrows, or Fire Spirits.

Zap – Many have noted, the best card in the game and it is truly a beast. This card will be your second counter to Minion Horde. It will also prevent your opponent from countering your Mini P.E.K.K.A effectively as well as giving it an extra shot on the tower. In higher level arenas, this card can stun a princess or ice wizard giving you time to swarm it easily with a Minion Horde. This is also the hard counter to many cards such as Goblin Barrel, sparky, Goblins, and Fire Spirits. You can replace this card with Arrows, or Fire Spirits.

Cannon – This card explains itself. It is the cheapest building with a decent amount of damage. It will always give you the +1 Elixir against hog decks as well as serve as a distraction to tank troops. The extra damage that this Cannon gives is a plus. Overall, this card has so many Elixir advantage opportunities and is certainly a staple in most decks. This card can be replaced with Tesla for easy Lava Hound counter, Inferno Tower for tank counters (although may be hard to deal with hogs), or if you want, Bomb Tower.

Minion Horde – The best defensive air unit in the game. It will counter that Giant Balloon easily as well as take out an unsuspecting sparky. The true power of this card comes when you combine it with the Miner. A Zap will not be enough to stop this combo and your opponent will not have enough time to think about what he has done before his tower goes down. Can almost be considered a staple. You can replace this card with 3 Elixir Minions or Musketeer.

The secret Miner strategy All Miner users have a secret that they do not share with anyone. Only Miner users know it and I will share it with you right now. Miner users have a little part of their brain dedicated to keeping track of all your Minion Horde counters. Yup, that’s all they will think about each battle. Don’t believe me? Ask the Top Players in the world! Look at their Decks! They do not run 3 Elixir Minions, but instead, Minion Horde. The reason for this is simple. Many players currently are deviating from using Arrows. Instead, they go for Princess and Zap. The problem with this is Miner deck. Miner + Minion Horde, the only effective counter for decks that run Princess and Zap would be the Princess. However, the Princess would be distracted by the Miner and Zap would be ineffective allowing your Minions demolish the tower untouched. This is the secret of a Miner player. They remember all your Minion Horde counters and once they figure you only have so few cards to counter Minion Horde, they will rush in at the moment you use it.

Deck Strengths: Miner deck strengths are its abilities to counter most pushes easily. Even if your troops are at a sliver of health, the Miner will tank for them while they make their way to deal damage onto the tower. This deck also has great defensive cards so defending and making a counter push will be no problem. The other strength in this deck is the ability to cycle through cards very quickly, especially during double Elixir time. With this deck averaging around 3.4 Elixir, you can send Miners almost every 15 seconds making it tedious for your opponent to even start a push. This deck is also a great counter against heavy tank decks as the Miner will take out Elixir collectors and the Mini P.E.K.K.A will do work against those strong tanks.

Deck Weaknesses – Of course, this deck has several weaknesses. You will often face against players with absolute knowledge of countering Miner decks. This usually happens in Legendary Arena. Many players there are skilled and understand how to counter Miner decks easily.

Remember, you need to “learn” all decks meaning it is OK to lose when you are just getting the hang of this deck. The more practice, the better you will get handling this deck. This Miner Mini P.E.K.K.A Poison Deck does require a lot of skill to master with. Happy clashing!

Shared by Blaxeturner from Particles! 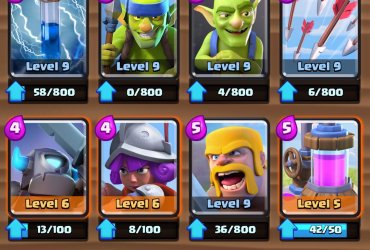 Hello guys, I am Dessieman and currently I made it to Legendary Arena with this Arena 6 control deck. I can also easily see that loads of players finding it … 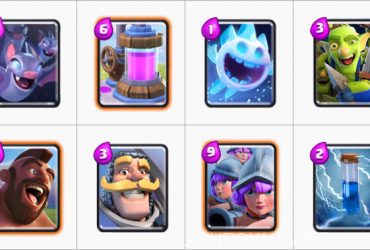 Hello guys, it’s Frosty here! So I decided to do something exciting. I took Woody’s X-Bowler deck to another level, which I’ve always wanted to do. Let’s dive right in! …