Hello Clashers! KairosTime here, with a Miner Inferno deck that has proven to win the 12th round of a challenge! This deck is fantastic at putting constant pressure on your opponent with chip damage that makes it hard for your opponent to keep up! With some practice, and this guide, you can take this deck to with the 12th round of any challenge, as my buddy Haybola did! This deck comes with a video guide on a YouTube series called “Challenge Winning Decks” that includes the winning 12th round replay that you can find it below! Feel free to check out my YouTube Channel for more video guides! 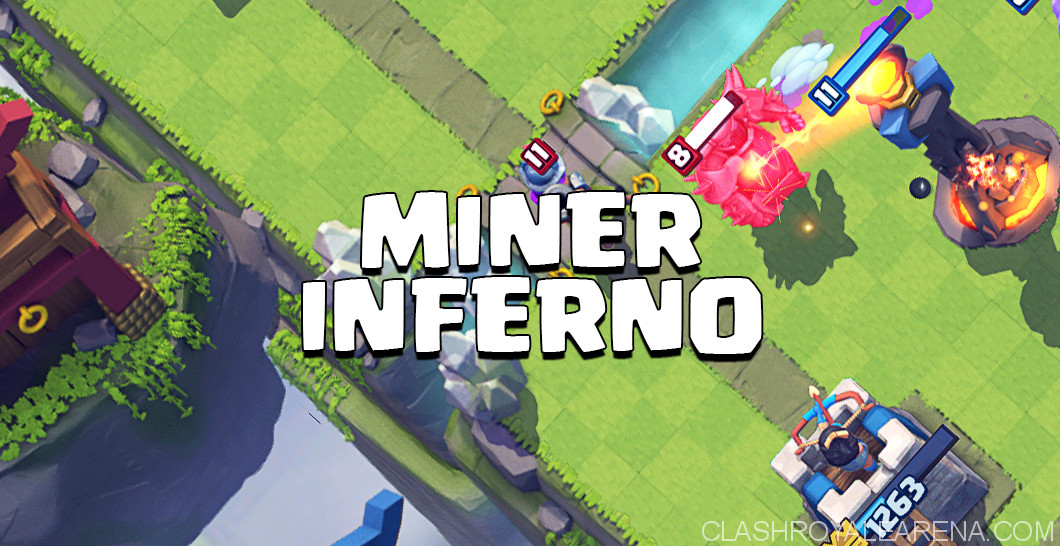 Miner – The Miner is one of the most versatile cards in the game! If ignored, he can take out an Elixir Pump anywhere on the map, be used to counter princesses, or even be used as a mini tank to distract towers long enough for other troops to take out a tower!

Alternatives – Although the Miner is the primary win condition, this deck is still fun with the Goblin Barrel, or even the Rocket!

Princess – Even with her nerf, the Princess is still a very powerful card worthy of being called “Legendary”. She takes a lot of skill to counter for a positive elixir trade and can do some massive damage if ignored.

Mini P.E.K.K.A – The Mini P.E.K.K.A is a fantastic runner, meaning that he goes from offense to defense very quickly! He’ll go “Pancakes” on Hog Riders, Royal Giants, or nearly any other card in the game!

Minions – Minions are a very well rounded card that can’t be ignored! Paired up with a Miner as a distraction, the Minions will quickly clear a tower! If you have a leveled up Mega Minion, try switching them out for it!

Fire Spirits – These little guys do a surprising amount of damage and a wise opponent won’t ignore them if they can. Pair them up with the Mini Pekka for some burnt pancakes!

Zap – The Zap is a powerful card and can be used in many different ways. Using it to clear Goblins, Spear Goblins, and Fire Spirits is one of the best ways to use it!

Ice Spirit – For 1 elixir, even with the recent nerf, the Ice Spirits still provide a ton of versatility in the deck!

This deck is a very fast paced and specializes in lots of chip damage that comes from multiple sources!

Miner + Minion – This is one of my favorites because if it is countered wrong, or your opponent doesn’t have something that can deal with the Minions, this combo will take out a tower super quickly! Place the Miner by the tower or Elixir Collector, and drop the Minions at the Bridge. If your opponent is too quick to drop a Princess or Ice Wizard, the Miner will be targeted and the Minions will be ignored, which is perfect for you! If your opponent has the Fire Spirits, be prepared with Zap, and if they have Arrows, don’t do this push unless it is out of their cycle because they used it on your princess

Miner + Fire Spirits – The Fire Spirits do a lot of damage on the tower and have a big radius! If my opponent defends against the Miner with Barbarians or the Mini P.E.K.K.A , I’ll do this push so that the Fire Spirits will severely damage my opponent’s defending troops along with doing over 500 damage to the tower at the tournament standard. Because Fire Spirits can only be defended for an uneven trade with the Ice Spirit and Skeletons, this isn’t a bad push to try ou!

Princess + Fire Spirits – This is by far the sneakiest and meanest combo but requires a lot of skill to pull off! The idea behind this push is to wait for your Princess to lock onto the enemy tower and drop the Fire Spirits around her right before. If your opponent tries to get an elixir advantage against your Princess with Goblins, Spirits, or Skeletons, your Fire Spirits will quickly take them down and they’ll be rushed to try and find a different counter. If they have a cycle deck and have multiple counters, be prepared with Zap ready to launch at the bridge if they drop anything!

This deck specializes in mini pushes that will land some damage with every push until your opponent’s tower has no health. Because a lot of the troops are easily cleared with Arrows or even Zap, I recommend only making one small push at a time. Once your opponent has cleared it, be ready to do another. If you keep the tempo up, your opponent won’t stand a chance!

When playing against heavy decks, like Giant Poison, it is important that you do not let your opponent get supporting troops behind their Giant. If they drop a Giant in the back, you should rush the other tower so they have to use their support troops to clear your mini pushes. Then, once their Giant crosses the bridge, drop your Inferno Tower or Mini P.E.K.K.A and keep playing!

This deck does the best in 1x Elixir which is ⅔ of the game without overtime, so try to have at least 1 tower down before hitting 2x Elixir. Once 2x Elixir hits, offense will be your best defense against heavy decks. If you’re facing against someone with a similar deck, or a Hog Cycle deck, feel free to play a bit more defensively after you get a tower.