Hello everyone, My nickname is Verdant and today I will be showing you my Miner Furnace deck that’s keeping me at 3.8k with 10/7/3/1. Also, I strongly believe that you can use this deck and get into Arena 9 with ease. 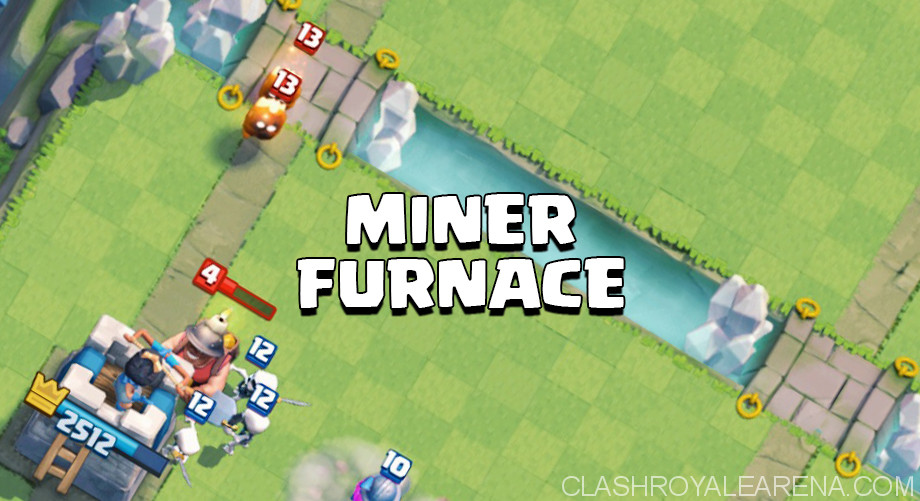 So I’ve been this game since March and have always preferred chip cycle decks over Beatdown decks. Before unlocking the Miner i used to run a Hog Cycle deck but ever since i unlocked him, I have been trying to find a perfectly balanced deck for him, and i think i did. Currently I’m on Phonecheetahs and working on my way to 4000 trophies.

Miner (Lv 1): The win condition of this deck. All your pushes should include him. When facing heavy decks running Elixir Collector, always send your Miner to get the positive Elixir trade, force your opponent to react and not form a complete push.

Ice Spirit (Lv 10): Honestly one of my favorite cards in the game. Just for 1 Elixir this card can make a huge difference on offense. Ice Spirit+Zap can completely take down a Minion Horde or take the Guards’ shield. Ice Spirit + Mini P.E.K.K.A is my favorite defensive combo to deal with tons of pushes. I strongly recommend you take a look at this guide for more details!

Zap (Lv 10): By far the best spell in the game. Complements the Ice Spirit perfectly. Always try to add him to your pushes. Very versatile and can be used in almost any situation.

Fireball (Lv7): Used to be overshadowed by Poison but after the balance changes it has become very viable. Use it for Barbs, Mega Minions and huge clumps of Medium health troops, if you used correctly you will get amazing value. Take a look at this in-depth guide for more details about the Fireball!

Mini P.E.K.K.A (Lv7): The staple card of the deck. Your tank stopper and main damage dealer. Excellent at turning defense into offense. When facing Hog cycle decks always try to counter him with Mini P.E.K.K.A and start mounting a counter push with Miner and ice spirit. The best tank killer at the moment! Take a look at here to read more about the Pancake hero!

Minions (Lv10): Completely punishes decks with little air defense. Can destroy ground troops running to your side of the map and turn them into counter pushes. Miner+Ice Spirit+Minions can destroy towers if the opponent isn’t ready for it. If your opponent runs Balloon consider saving minions for defense.

Furnace (Lv7): I’m not going to lie, Furnace is a tough card to play if it doesn’t reach your opponents tower. If your opponent can completely stop your pushes, that is where the Furnace comes in. Forces your opponents to react to a card on your side of the map and letting you form a bigger push. Mainly used for defense or chip damage.

Guards (Lv 3): By far my favorite card simply because this bad boys counter so many cards. Exclusive for defense the Guards are one of the best cards in the current META. Save them for single target troops. If surround a Sparky with Guards it will take her 4 shots to completely kill them all. Can not be saved which makes them great Hog counters.

Control the set of the game

This is your time to shine. You will want to have your Furnace or Miner on your starting hand. If you get your Furnace, play it slow and counter your opponent moves. If you get a Miner you will want to start a push at the bridge just to test the waters and see how your opponent counters. If you do not get either of this cards play Minions or Ice Spirit near your Crown Tower and you should already have a Miner of Furnace on your hand.

During this period you will want to learn all the cards that your opponent has and mess up his cycle. For example, if he has arrows always try to bait his arrows with guards or force his guards so your Mini P.E.K.K.A doesn’t run into trouble. You generally do not want to start pushes from the back nor push with a bare Mini P.E.K.K.A + Miner push.

Ways to play the deck

This is deck is so good because it has many versatile cards and can be played 3 different ways depending on your opponent cards and cycle.

Alright guys this has been it, hope you enjoyed this deck and hopefully give it a try. If you have any questions don’t hesitate on posting a comment!