Hey guys, KairosTime here with a powerful double P.E.K.K.A deck that has proven to win the 12th round of a grand challenge! This deck is fantastic at putting constant pressure on your opponent with chip damage that makes it hard for your opponent to keep up! This deck takes some practice to master but with the help of this guide, you can take this deck to with the 12th round of any challenge, as my buddy noobiemaster did! This deck comes with a video guide on a YouTube series called “Challenge Winning Decks” which includes the winning 12th round replay that you can find it below! Feel free to check out my YouTube Channel for more video guides! 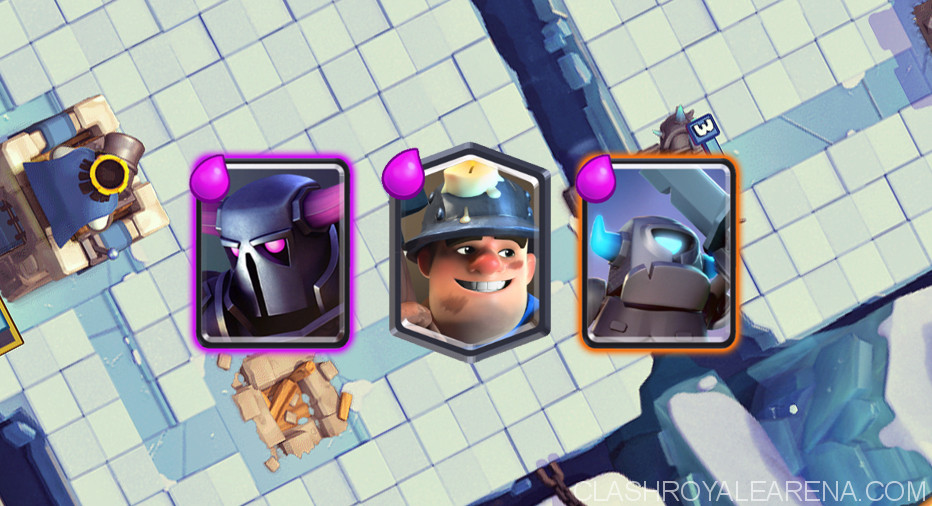 P.E.K.K.A – The P.E.K.K.A is a force that can’t be ignored, and your opponent will do anything to keep her from landing her mighty sword on their tower. The sound of her landing on the map still sends chills down my spine! Alternatives – Giant, Giant Skeleton amd Golem.

Mini P.E.K.K.A – The Mini P.E.K.K.A loves pancakes, and is strong on both offense and defense! Use this little guy to defend strong pushes and make even stronger counter-pushes!

Miner – The Miner is a super versatile card in the game! His many uses make him difficult to replace in a lot of different types of decks, but his primary use in this deck is to clear defending ranged troops that are locked on to the P.E.K.K.A, so try to switch him out with one of his alternatives if you don’t have him. Alternatives – Fireball, Poison, Log

Witch – The Witch comes with her own little army which makes her difficult to deal with when behind the P.E.K.K.A. She’s great on defense if you can turn her defense to a counter-push! Alternatives – Tombstone, Furnace

Musketeer – The Musketeer is one of the best cards in the game, especially when she can’t be 1-shotted by a Fireball. Use her to support the P.E.K.K.A and she’ll plow through defending troops!

Ice Wizard – The Ice Wizard is a tanky troop that is very strong on defense and will slow down defending troops, making it easier for your P.E.K.K.A to make it to the tower! If you don’t have him, switch him out for one of his alternatives. Alternatives – Wizard, Ice Spirit, Baby Dragon, Princess

Zap – Zap has so many great uses in this deck for only 2 elixir. Whether it is used to reset an Inferno Tower, or to clear small troops that are distracting your P.E.K.K.A, Zap is a must-have card in this deck.

Hog Cycle Decks – These decks require some practice playing against so I recommend that you watch the video for a replay example on how to face Hog Decks. The trick with these decks is to use your towers’ health as a resource. That means that you should allow your opponent to deal some damage to your tower so that you can save up your elixir. One of the best ways to do this is with the Ice Wizard, Musketeer, or Mini P.E.K.K.A. By spending 3 or 4 elixir, your tower will take out a Hog Rider with only a few hits on it. This can take some health off your tower, but spending little Elixir to defend will allow you to make a comeback when you have enough Elixir to drop you P.E.K.K.A and some supporting troops. When you are ready to drop the P.E.K.K.A, it may be good to drop her by your tower so she can clear the Hog Rider and so you have some time before she makes it to the bridge while you add supporting troops.

Giant Poison Decks – This is another tough deck to play against because Poison does such a good job at clearing your P.E.K.K.A’s supporting units. You will want to watch the video for 2 replays on this one so you can see an example of how to overcome this difficult matchup and with some skill, you will be unstoppable! Facing Giant Poison Decks is all about troop placement when you know that your opponent has the Poison ready. You will want to use your P.E.K.K.A to take out the enemy Giant on your side of the map, and place your Mini P.E.K.K.A and Ice Wizard in the right place to take out supporting troops. You can place your Mini P.E.K.K.A in the Poison but you will want to keep other troops far from each other so they can’t all be Poisoned.

Miner Chip Damage Decks – Miner Chip Damage decks can be dangerous if you’re not expecting them. Because the Miner doesn’t actually do very much damage to the tower, you can usually ignore the miner and focus on the troops coming down the lane. Usually a Mini P.E.K.K.A or the Ice Wizard are the best troops to use, but you will want to place them so they won’t target the Miner first, but will target him after they have cleared oncoming troops. Like Hog Cycle Decks, the best way to face these decks is to use your towers’ health as a resource and try to defend with as little elixir as possible, so you can mount a powerful push that won’t be able to be stopped. If you can do that, these decks won’t be hard for you to face as long as you protect your Elixir Collector with the Ice Wizard or Mini P.E.K.K.A.

Other Decks – Honestly, this deck doesn’t have much of a difficult time facing other decks as long as you follow the advice above. If you’re ready to mount a push, defend tanky troops with the P.E.K.K.A but if you’re not ready, be patient and your time will come. You will want to try and get your Collectors down and protect them without committing too much to defense. When facing other P.E.K.K.A decks, it is usually the P.E.K.K.A that gets dropped last that will triumph so being patient is very important. If you’re facing Double Prince decks, you’ll want to save your Zap for the right moment and counter attack with a P.E.K.K.A or Mini P.E.K.K.A depending on whether you want to defend or go on the offense. Feel free to leave comments below if you’re having issues with other deck types!

This deck is so strong because it uses the sheer force of your P.E.K.K.A backed up with 3 ranged supporting troops and a Miner that can be used to clear Musketeers or Princesses anywhere on the map. As soon as you drop the P.E.K.K.A, your opponent’s play style will shift, so wait for the right time, but don’t wait too long or she won’t make it to the enemy tower before the time runs out. If you’ve lost a tower and know that you won’t go into overtime, You will want to drop your first P.E.K.K.A before there’s only 1:15 left, or your opponent may be able to distract her enough that she won’t make it to the tower. If you are going into overtime, you can even wait until 15 seconds before overtime before dropping your first P.E.K.K.A.

Popular Defenses and Taking Them Down:

This deck takes some practice to learn how to use so be patient. After seeing my buddy noobiemaster win a grand challenge (Replay in video), I had to try this deck out! If you’re like me, you may lose your first couple matches but keep practicing and follow the advice in this guide and you will see just how strong this deck is!

Thanks for taking the time to read this guide! I hope that you have found this Miner Double P.E.K.K.A Deck helpful. This is KairosTime ticking by! See you in the Arena!