Hey guys, what’s up! It’s NebulaNoodle (formerly Mortar Rocket FTW) back at it with another deck guide.

I haven’t posted a guide in a while due to school, but now I have some time! Today I’m going to show you a popular Miner deck among many YouTubers that ElecTrify got 20 wins on the 20 win challenge with a while back.

This Miner Poison variant is extremely fast, extremely punishing, and extremely fun to play! Without further ado, let’s get right into the deck. 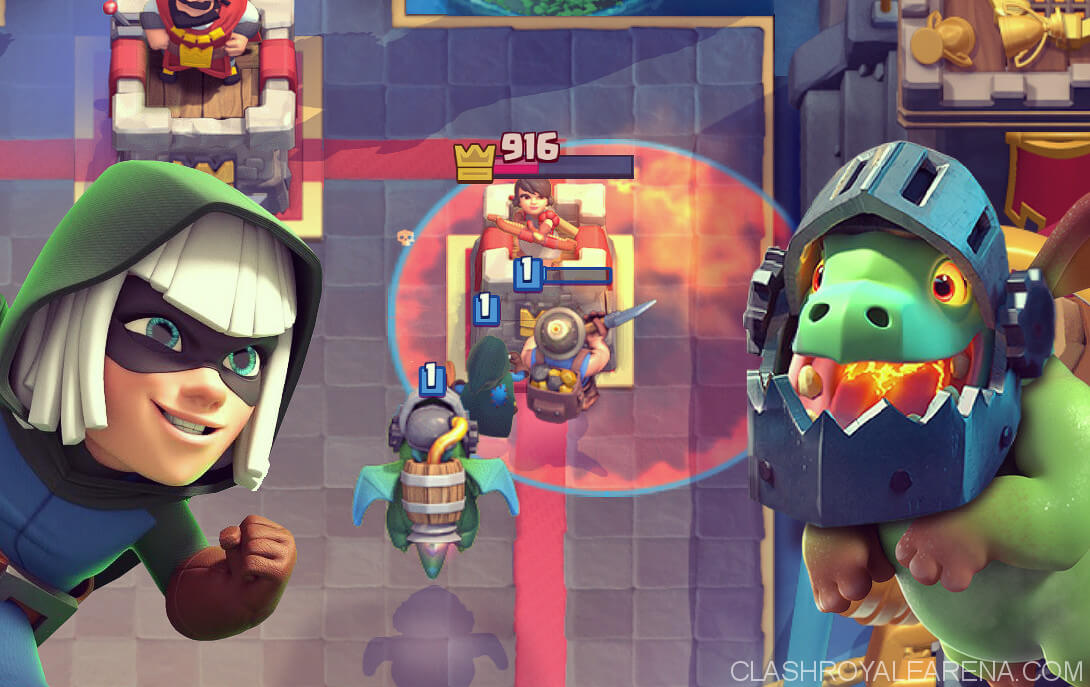 The Ice Golem is such a good card, especially against PEKKAs and Mega Knights. For 2 elixir this frosty dude offers so much value. If your opponent is out of counters, Ice Golem + Bats= Mega Knight DEAD!

Kiting is his forte, and you can make so many positive trades out of him. Also, it’s dead funny seeing a PEKKA walk his lonely walk to doom following the Ice Golem.

BATS! These purple critters have insane DPS, and are amazing against any high DPS troop. Paired with the Miner they form an amazing push as it forces your opponent to split their troops or suffer massive damage from either Bats or Miner. AND that mini-push only costs 5 elixir! Acts as zap bait so your Inferno Dragon can do its job.

Miner: This deck revolves around this chip master!

The miner is my absolute favorite card. He’s just so good as a mini tank for anything: Balloon, Goblins, whatever! And, paired with poison you’re guaranteed 300+ damage.

Just keep chipping away. Only use him in clutch defensive situations, if you’re out of counters, but you need him or else you’ll struggle with getting tower damage!

He’s also extremely good in counterpushing- just plop him on the tower to tank for half-dead troops!

Miner + Inferno Dragon is a threatening push, especially if your opponent pumps up, and you can punish him.

Just make to poison that minion horde, zap those bats, because if your inferno dragon doesn’t heat you’re screwed against heavy beatdown because you rely on him.

Goblins are amazing. They offer strong DPS, and don’t die to zap of same level. Many people zap Goblins but all you’re doing is momentarily stunning them.

When a Miner is tanking for them and people Zap them that’s a waste of 2 elixir because the Princess tower is on the Miner!

Ok I said Bandit was overrated on my post ‘Top 5 Overrated Cards in Clash Royale’ which got mixed reviews but since I got Bandit (a week ago from Crown Chest) I found out she wasn’t too bad.

She takes care of glass cannons and Miner+ Bandit is one of the strongest quick pushes. I like using bandit to force my opponent to overspend which is what a lot of people tend to do, if I know they’re out of their usual counters.

In this deck, Bandit acts a distraction and punisher.

Poison was meant to be used with Miner from the beginning, and it complements him so well.

It prevents swarms from attacking your Miner and chips the tower as well. Use on minion hordes, glass cannons, whatever comes your way. Bandit+Miner+Poison is a beast 10 elixir push if you have a big elixir lead.

Build up elixir leads by poisoning big pushes, and your zap will finish most things off. E.g. poison+zap= 3 musketeers dead.

Just don’t zap a Golem. You never know who might be that stupid- lol!

The best starting moves would be Miner in the anti-tornado position, Bats in the back, or Ice Golem in the back.

If you don’t know what the anti-tornado position is it’s the bottom left corner of the left tower or vice versa on the right tower.

Try to play cautiously and try not to show your inferno dragon too early or else they will start figuring it out and if you’re playing a Golem user they can easily Lightning out your defensive troops.

Play your bandit offensively only on the counterattack and after your opponent has used his counters or else your opponent will easily counter her.

In the mid-game, keep cycling miner poisons and chip away slowly at the tower. This deck is meant to be a 1-0 victory deck so NEVER overcommit and don’t play too aggressively as you need the elixir to defend against beatdown decks.

If tower trading is needed, minimally defend the tower which is going to down and push hard on the 2nd tower, because this deck is cheap and your only real reliable tank killer is Inferno Dragon.

In overtime, if this game goes into overtime, hopefully you will have gotten your opponent’s tower down to 800 HP or so. Cycle more miner poison, and support your miner with threat troops like Inferno Dragon, Bandit, or Bats.

If you keep attacking continually, your opponent will have to keep spending elixir to defend and he won’t have enough elixir to attack. And because this deck is so cheap you will be able to keep attacking.

You have Inferno Dragon for P.E.K.K.A, but watch out for Lightning. If your opponent has E-wiz, try pulling the E-wiz with your Miner to stall their offense.

Often these decks might have miner or hog, but you have a nice counter in Bats, which can mitigate a lot of damage. If they zap, it might be hard for you because they might also have lightning for your inferno dragon. Just try to bait out their spells.

If they play their PEKKA punish with something like Miner+Bandit because you can easily cycle back to them in a defensive position because the PEKKA is slow.

Try to hold them to a draw if you’re finding attacking too hard.

Basically same thing as PEKKA, but if they are playing something like Golem Mini Pekka or Golem Lumberjack, it might be hard to stop because those two melee unit tank killers can easily shred a lot of cards in this deck.

They have a lot of hard counters to this deck (Lightning for Inferno Dragon or Goblins for Miner) but don’t be disheartened. Punish the pump with quick Miner pushes.

Just try to keep away as much damage as possible from the goblin barrel (overleveled zap helps so you can kill the goblins). and don’t give them rocket value. For princess you have stuff like miner.

Zap helps so much in this deck. They won’t be able to get much damage off if you follow the first two rules!

Poison the pump because you’ll be cycling back to another poison in no time. Dealing with the ram or ice golem is fine (goblins) too. Rush attack if they play their pump at all costs, because gaining an elixir advantage with this deck isn’t as significant as if you were using a beatdown deck.

You are most likely to get a tie in this matchup due to the similar playstyles between the two decks.

Keeping up with the cycle is easy. Use cheap defense like Goblins and Bats then go in for the counterattack with Miner. Don’t use Miner Poison in early game as this 7 elixir is too expendable and they could easily counter with something like Knight. Only use this combo in 2x elixir.

Bait out zap or something with Inferno Dragon then use bats on balloon. Easy +3 elixir advantage!

They will probably have ice golem or something tanking, so place bats high to deal with balloon first, and the bats are fast enough to keep up with the balloon.

They will almost inevitably have lightning for your inferno dragon and your bats can easily get demolished by arrows or Baby Dragon or something like that.

Defend minimally because you will almost always take quite a hefty amount of damage. Instead, attack, attack, attack and try to get 2 crowns before they 3 crown you! Take advantage of your towers’ help.

That’s it guys, hope you enjoyed this deck! PCE <3