Hello everyone, Azuraith here! I once made a guide on here a long time ago featuring hog/miner. Since then I have become quite the self proclaimed expert on miner usage. This new deck of mine features the miner and many spell bait spells. This deck pushed me from 3500 to 4100+ trophies. My card levels for this deck will be listed below beside each card. In this guide I will explain how the deck works in theory and how to properly use each individual card. 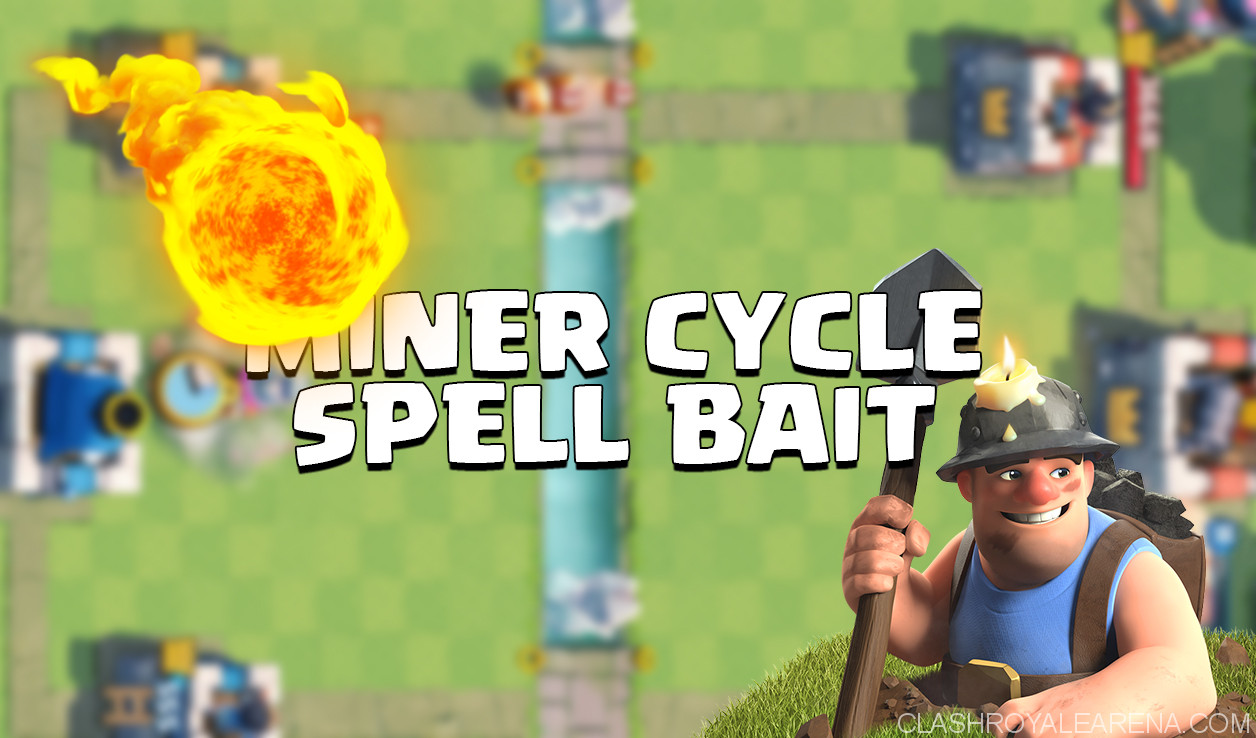 Now to get into the specifics of each card.

Miner: The Miner is the heart and soul of any cycle deck. It can be used to take out elixir collectors, huts, or used as a mini tank for your offensive pushes. Best legendary in the game for sure. Use it to take out pesky Princess’ if you don’t have any other options. Try to never use it on defense, if you are playing the deck properly you should have MANY defensive options and never need to use it defensively.

Goblin Barrel: This is your main source of burst damage. There are several ways to use this card in the deck. You can hold it for a long time and wait for them to Zap something else to get big damage or you can use it as the Zap bait to defend strong pushes with your Inferno Tower/Skeleton Army. It is quite versatile in spell bait decks. However, don’t use it alone unless you are using it as bait or as a finish, this will limit it’s damage to less then 1000.

Skeleton Army: This card has recently received a HUGE buff. Before this patch the Skeleton Army was my #1 worst card in the game and now I use it in everything. It is an amazing defensive card that can stop high damage targets or annoying tanks. Not only can it take out enemy troops but it can serve as an amazing distraction and also as a surprise push troop. If you recently used your Zap and the opponents Lava Hound is about to “pop” then place down Skeleton Army, this will give your tower a large amount of time to take out many of the pups, however you will lose your Skeletons in the process. A solid push tactic at the end of the game, if you have taken out a tower already, is to place down the Miner behind the 2nd tower, throw Goblin Barrel on the side of the tower that is closest to the arena wall, place a Princess at the bridge, then put a Skeleton Army right in the center of their side. This push is DEVASTATING in the late game if they only have 1 spell such as log or Zap, since they will NOT be able to get 2 of them at once no matter what they do without taking HUGE DAMAGE.

Princess: This card is quite straight forward in the deck. Used as a hybrid offense/defense card. The Princess can help take out Minions, huts, Goblins, hounds. It is just amazing. But be careful for Princess placement. Do not place it with other low health troops as that will be bad for baiting spells.

Goblins: This card is severely underrated in my opinion. For only 2 elixir it can deal over 2000 damage if the Miner is tanking for it. That’s only a 5 elixir combo! Goblins will serve as great spell bait for this reason giving you plenty of opportunity to use Inferno Tower/Skeleton Army on defense or Goblin Barrel/Princess on offense. Goblins can also be a great defensive option in this deck as well. Place them between your two towers to pull Princes and Mini P.E.K.K.As to take them out with the help of the tower.

Fire Spirits: Another under appreciated card. Fire Spirits deal HUGE damage if they all attack successfully and can take out Minions, Barbarians (with the help of the tower), Mini P.E.K.K.A (if you pull it to the middle) and MANY other troops. Fire Spirits are primarily used on defense in this deck. However, they have a few interesting other purposes also. Use the Fire Spirits preemptively to protect to Princess. Most people will place Goblins/Ice Spirit/Fire Spirits at the bridge to take out your Princess. If you preemptively place your Fire Spirits when you think they will, you will destroy the defending troop and your Princess will get more shots on the tower. Also if you double drop Goblins then Fire Spirits on top, you will get a diamond shaped Goblins+Fire Spirits formation push. This is good for taking out small defending troops and doing big damage on the tower if they don’t defend. Be careful though, don’t use this combo if you have no baited Zap recently or do not have enough elixir to defend. Also this combo works best if a Miner is played first.

Zap: The best spell in the game, potentially the best card in the game. This is your utility card. It can be used to reset troops such as sparky, or really anything. It can be used to take out Minions, Minion horde, Lava Hound pups or to take out opponents defending small troops. Not much needs to be said about Zap, you should learn it, love it, live it if you haven’t already

Inferno Tower: This is your primary tank killer. If you notice that they have no tank then you may not use it sometimes but it is still a necessary card in the deck. This makes the deck more defensive then offensive and you should keeping that in mind when using the deck. As going on the offensive too often will leave you open to a beating. Play defensive bait spells, then push with small combos. If you know the opponent has Zap wait for them to Zap the Inferno before playing Skeleton Army as a secondary defense. These 2 cards combined are very difficult to get by and can shut down almost any push in the game. BEWARE OF BOWLER.

This deck is what is known as a spell bait deck. Many of the cards deal high damage and cost very little forcing your opponent to use troops/spells to deal with them. Many of the cards such as Princess, Gob Barrel and Goblins are often targets for spells such as Zap, Log, Arrows, Fireballs. This means that they will never be able to get them all unless they use 3-4 spells in their deck, which almost never happens.

Placement of the troops in this deck is BY FAR the most important aspect. Since you are trying to force them to use spells and then counter with a card that needed that spell to be dealt with. You will need to NEVER place those troops together or else they will get 2 troops for 1 spell and your entire rotation will be ruined. Only place units together if you KNOWN that they do not currently have it in their rotation. Knowing the radius of each spell is important. You will primarily use Miner + other cards for big damage. Examples are: Miner+Goblins, Miner+gob barrel, Miner+Fire Spirits.

Princess is another main source of damage. It can be used to chip away at towers forcing the opponents to use cards such as log. It is also a GREAT defensive card. Learning Princess placement is important. Now that poison is nerfed, you see a bit more Barbarians and Minion hordes. Fire Spirits is your main defensive splash card, but it can be used on offense if you are keeping track of their rotation.

In conclusion, this new deck of mine has given me great success. I hope you try it out and find success with it as well. Check out my clan##NeoGeoRoyal we are top 50+ in NA and are pushing for top 200 global.