What is up guys, Corrosive Logic, here again with another deck guide!

The other difference in the decks is that I carry the Ice Spirit in this one, as playing in ladder Ice Spirit is a lot better against the Royal Giant and it also helps the Miner do chip damage on offense.

I also made a video on the deck, where I play a lvl 13 Royal Giant and show you how I beat it, so check it out below! 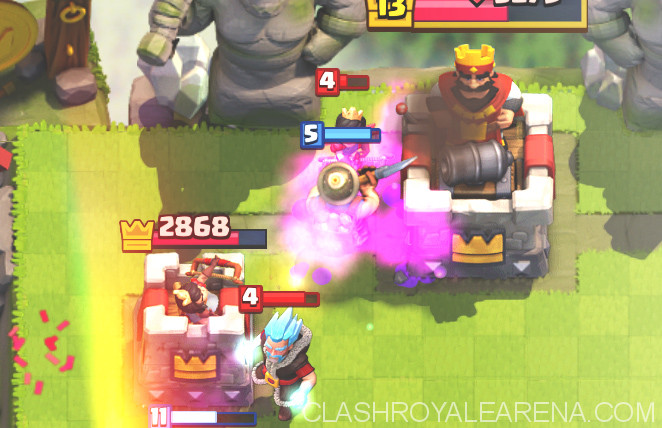 So those are the exact card levels I used to reach 4635 trophies (11/8/4/1.25), my new career high. Nothing spectacular, but my card levels are pretty much lower than the majority of players at that trophy range.

Miner Control/Bait Deck That Helped Me Push To 4600 Trophies

I know not all of you are going to have Legendaries so I’ll tell you the 2 card replacements you could make. Keep in mind that this deck might not be as effective if you change it up.

Princess – Can be replaced with Dart Goblin

The deck’s main win condition is the Miner. Since the deck has no Goblin Barrel, the only bait is the Princess, Skeleton Army, and the Inferno, which is still a really strong defensive combination.

I’ve tried using the rocket instead of the Fireball, both have their pros and cons against different decks, but overall I prefer the Fireball in this one.

Offense in this deck is really simple. In general, players in ladder are usually less skillful than challenge or tournament players, because of this, there are a lot more chances for counter pushes. The Knight left alone on the tower does a surprisingly large amount of damage, often times when a Knight or Skeleton Army are about to cross the river after defending, I throw my Miner at the bridge. Even a few Skeletons will deal tons of damage if the Miner is tanking for them.

You really do need to change your Miner placement every time. Use every corner, every side of the crown tower that you can think of. Just be careful that you don’t place your Miner in the spot where 2 crown towers can lock onto it. Once if you’ve chipped with your Miner enough times, you’ve now got a good idea of your opponent’s deck, and you can start sending in the prediction Fireballs after your Miner to kill whatever they use to try and counter it. I always suggest that you don’t Fireball immediately after, as your opponent could see the Fireball coming before they place a troop, so I would suggest you use it a split second afterwards.

Depending on the amount of times they ignore your Miner, it usually won’t do a lot of damage. So don’t be surprised if a lot of games end in a draw, actually I encourage you to end games in a draw. Sometimes that might be a minute left in the game and you didn’t manage to do a lot of damage, don’t try and rush them or over expend, continue playing defense and play for a draw. You can’t win every game in ladder, you’ve got to draw if you want to climb higher. So right now, I guess we can start talking about defense.

Royal Giant and Giant are the most popular decks that you’ll face in ladder, followed by the Hog and Lavahound. So these are the matchups that I will go through below.

First of all, you’ve got your Inferno tower for the Lavahound, then play the Princess on the other side of the map. Be ready for the Miner with your Skeleton Army or Knight. Remember you’ve got Fireball for grouped up troops, specially Minions, Minion Horde, and pups. Sometimes they will Log your Princess so when their hound pops it might be necessary to use your Knight or Skeleton Army to tank the Lava pup shots. If you can, try and cycle back to your Princess as soon as possible.

If they play the Lavahound on the opposite side of the side you are pushing on, then use the Miner + another troop on their crown tower. The other troop maybe the Ice Spirit, Knight, or Skeleton Army, depending on the situation. Basically you need your opponent to expend elixir in countering your push, otherwise a fully charged Lavahound push is just too strong.

Of course you have to rely on the Inferno tower again. If they are playing Minions/Musketeer/Electro Wizard then you will have to play your Inferno tower 4 tiles from the river, on the side that their push is coming from. Use the Knight and Skeleton Army to kill their support troops. If they have Zap, they’re going to have to choose between the Skeleton Army or Inferno tower. If they have Lightning, then you will have to play the Inferno beside the bridge and one tile towards the other crown tower in order to avoid a Lightning on both your tower and the Inferno.

Generally, same as against Lavahounds, send the Miner in on the crown tower you are targeting if it’s in the opposite lane. However, against Giant decks you can only chip with the Miner, or Miner Ice Spirit, because you need the Skeleton Army and Knight for defense.

These can be very tricky to defend against. Your first line of defense is the Inferno. Play it just as the RG crosses the bridge so that your crown tower can also target it. Remember that 99% of RG decks are going to have Minions, so vary your Inferno placement in order to give their Minions a harder time. If they are using any half decent amount of troops to back the RG you pretty much need to play the Princess on the other side, and use the Ice Spirit to buy you time. More than likely they are also going to be able to Zap the Inferno so in that case play the Skeleton Army so that they have to choose between the two.

The Inferno by itself is a brilliant counter to the Hog. Hog + Zap or Hog + Ice Spirit pushes can usually be countered by the Inferno. Eventually a Hog player will either have to do something about your Inferno. They can try and out cycle it, so you just have to cycle offensively very quickly too! They can just prediction Fireball your Inferno with troops protecting the Hog, in these cases you just have to invest a lot of troops to defend it.

Skeleton Army is a great counter to the Hog, if you’re playing a good player then they will very likely try and prediction Log your Skeleton Army. Being aware of this you have to either change the Skeleton Army placement or play it late, after their Log. Ice Spirit paired with any defense also works very well with the Hog.

Overall it’s an amazing, fun deck for playing on ladder! Just remember patience is the key, just keep defending and wait for openings. When I first picked up this deck I lost a few games because I would always over extend on offensive, go for draws as they are easier to pull off on ladder!

As always, I would very much appreciate it if you could subscribe to my Youtube channel, as it encourages me to continue putting time and effort into these guides!