What’s up guys It’s Zigge again! I’ve been very tired of playing against Meta decks lately. So I decided to make a deck to specifically counter them. Cards that are popular in the Meta right now are; Meta Minion, Zap, Giant, The Log, Tombstone, Lightning, Inferno Tower. Those are the ones I can think of right now. This deck is also intended to make positive Elixir trades. Let’s get into the deck! 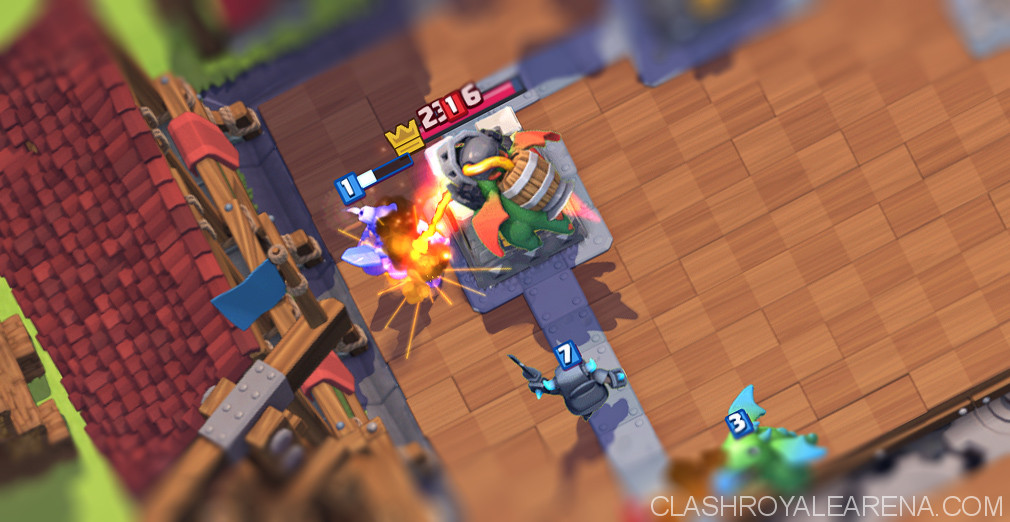 Miner – The core of this deck. Use him to chip your opponents tower with Minions or a Fireball. He gained more popularity immediately after the Poison buff but has slowly gained less and less these days after. But, we use him! This card can be replaced with many different cards like Giant, Hog Rider or even a Golem but Miner is recommended due to his cheap cost and ability to make it directly to your opponents tower to tank for your troops.

Mini PE.K.K.A – You also read that right. The Mini P.E.K.K.A. He was one of the best and most popular cards in the game but now he he has almost not been used at all in Arena 7 and upwards. But, he’s not in the Meta, so we use him! Very good for defending against Giants and Hog Riders, then add in a Miner and Fire Spirits for a strong counterpush. Can be replaced with Lumberjack.

More: Mini P.E.K.K.A vs everything

Fire Spirits – One of the absolute best cards in the game. These little dudes will finish soooo many cards alone. Minion Horde, Barbarians, Guards, Goblin Barrel, Meta Minion etc. And the best part, positive Elixir trade! All of these cards get countered, but not just that, it’s for a positive Elixir trade! Use them on defense 90% of the time but if you get the chance to rush your opponent, they are very good offensive cards too! These dudes can not be replaced due to their cheap cost and high splash damage. They are not popular at all, even though they are probably the best card for making positive Elixir trades. I wonder why Yarn doesn’t use them…

Tombstone – One of the best defensive buildings in the game. Place it down when you have it to defend against many different cards in the game like the Hog Rider and Giant. It provides a different angle of defense as they key isn’t to damage the troops, rather distract and pull them while your tower do work to their troops. This can be replaced with almost any defensive building.

Fireball – One of the best cards to use with the Miner as your opponents troops will be demolished by the Fireball. Fireball is one of the best cards to kill troops such as Musketeers and Mega Minions. Fireball can also be used to finish off a weak tower. Zap + Fireball is a very strong combo against Three Musketeers or if your opponents make a big push with many supporting units such as Musketeers and Wizards.

Baby Dragon – I really like him lately due to the fact the he is extremely unique, guessed why yet? He is actually the only splash damage dealing flying card! You read that right. This makes him really good for taking out Barbarians, Minions, Guards, etc. Use him on defense and to counterpush adding the Miner and Spear Goblins. I really don’t recommend replacing this card but if you aren’t comfortable playing this card, a Meta Minion will do the job quite well.

Spear Goblins – One of least popular cards in the game because of the popularity of Archers and Mega Minion. Use them with your Miner for small pushes but they can also be they key in a bigger push if your opponent has worse things to worry about and they just chip for 4-5 seconds. I don’t recommend replacing these doods because they are very good offensively due to their fast move speed.

Zap – You know how and why to use this card etc. etc. So just use it with your Baby Dragon making him able to one-shot them. It’s also a very good card paired with Fireball etc. etc.

Play very defensively until you’ve figured out their deck and strategy (I will later in this guide mention how to counter specific strategies and what to do and what not to). Your main damage dealers are your Mini P.E.K.K.A and Baby Dragon. Spear Goblins are also very good for chipping. A lone Miner is very a very underrated type of chip damage if you have a Tombstone in that lane because the Skeletons will do insane damage if not countered properly.

How do I play against certain decks?

When is the right time to make a push?

You don’t really push that much in 1x Elixir. Focus on making positive Elixir trades with your Fire Spirits and Baby Dragon. Make small counterpushes.

How do I attack in 2x Elixir? What cards do I choose?

In 2x Elixir, pressure is the most important part while using this deck. Miner + Mini P.E.K.K.A is the main push of the deck. Don’t abandon counterpushing even though you get the Elixir faster. However, normal pushes are more valuable.

Guys, that’s it for my guide! Hope you have a good day, comment if you need any help or advice and peace out!