What’s up everyone I’m Zigge, and I’m gonna show you a brand new Miner Balloon Freeze deck. This deck requires 2 Legendary cards which is the Princess and the Miner but I will mention a couple of good substitutes for the Princess at least. Let’s get into it. This is a control deck with a surprise Balloon and a Freeze Spell. It is all about to control the battlefield, knowing your opponents cards and then get a huge counter push a support it with your Balloon and Freeze Spell. 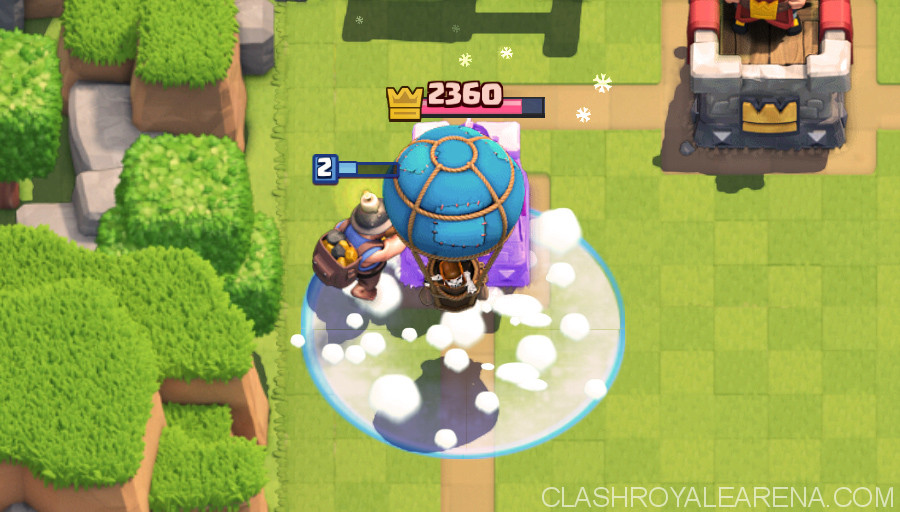 Miner: He is the core of your deck and will gladly take out your opponents Pumps and Princesses as well as taking their tower. Use him to counter push and to tank for your other troops while you let them decimate their towers. He is one of the best cards in the game as he’s a mini tank that you can spawn anywhere in the arena. There is no substitute for him and any level Miner will do the job in this deck.

Balloon: Your main goal is to get this lil’ bad boy to the tower. But, with his slow move and attack speed, it can be quite difficult. At level 1, He does 6oo DPH (Damage Per Hit) which is one of the highest in the game. Your biggest enemy when using this deck is Minion Hordes (with their high DPS [Damage per Second]) and Ice Wizard (slows your Balloon’s already slow attack and move speed with 35%). A level 1 Balloon is not recommended. A level 4 Balloon is strongly recommended. You can’t replace the Balloon, even if you would want to. If you have the Miner, you have the ‘loon.

Freeze Spell: One of the strongest cards in the game if you use it correctly. Freeze your opponents troops on defense if you need to but you will wanna save your Freeze for offense in most cases. Works very well with Balloon and will give you an extra hit or two (depends on your Freeze level). This card can absolutely not be replaced due to its unique ability. You will want to have your Freeze Spell at least the same level as your Balloon (level 4+).

Pro Tip: Learn the delay on the Freeze Spell. You don’t want to Freeze the ground and then be the one to get laughed at.

Inferno Tower: The most popular defense in the game at the moment typing this guide. This fire breathing tower will still stand strong even post-nerf. With its increasing damage, it will kill the tanks almost as fast as small units. Your only strong defensive card in this deck, so be careful when using it. Replace it with Inferno Dragon if you’re lucky enough to have it. At least a level 7 Inferno Tower is recommended.

Minions: Place it behind your Balloon to quickly slice through threats such as Inferno Dragons, Musketeers and Minions. He is basically like a flying Knight! Works very well with both Miner and Balloon and both on offense and defense. Very versatile. A level 6 Mega Minion is recommended when using this deck. You can replace them with Mega Minion. He has one weakness though. Cupcakes.

Princess: The Princess. I was so happy when I bought her from the shop for 40k gold. And she has been my most used card since then. I use her in almost every deck and I’m also able to, ’cause of the versatility. She will help you Balloon to ”get to the towah” through shooting her flaming arrows across the whole arena. Place her right on the bridge if you opponent is placing an expensive card (6 Elixir+) in the back to force out cards. Any level Princess will do the job in this deck. You can replace her with Fire Spirits, Wizard, Ice Wizard or Baby Dragon.

Skeletons: Not much to say about these ”Three fast, very weak melee fighters.”. Use them to distract any type of P.E.K.K.A coming at you. Or to ”Surround you enemies with this pile of bones!”. Any level Skeletons will do the job. You could replace them with Skeleton Army, Goblins or Guards.

Zap: The most popular card in the whole game. Stuns your enemies for 0.5 seconds an dealing damage to them. Excellent to kill Minions and Minion Hordes with on your side and on your opponents side with a Princess shot too. Perfect against Sparky, Princes and Inferno Tower.

Play defense and try to reveal your opponents counters to your Balloon. When you think you got it, send everyone! Place your Miner on his tower, your Balloon on the farthest tile from the river. Only do this attack in double elixir or if you have a massive elixir lead and have a Princess down, ready to support your Balloon in its way to the tower. Place your Minions behind your Balloon if needed to take out any troops. If there aren’t any, save your elixir for a Freeze. Use your Freeze only if needed. This deck is missing direct damage spells but you got your Princess ready to place at the bridge for at least 140 damage and your Miner that you can switch up your position with.

Heres the card you want to place down first: (in order)

If you have the bad hand (Balloon, Freeze Spell, Zap and Inferno Tower), wait for your opponent to make a move, and if he doesn’t. Wait until 2x Elixir and rush him with Miner, Balloon, Princess and a Zap ready. And remember, save your Freeze and Balloon for a surprise if you match goes on without a stirring competition at the start.

The ultimate push is, as mentioned, Miner, Balloon, Princess, Minions, with a Zap and Freeze ready. But, this push costs so much Elixir that you will only be able to perform it once in a game, if even once. That’s why a I’m here gonna tell you other pushes that might chip you opponents tower, but, if you’re lucky and skilled enough, they can also take his tower(s). Here we go: (in order)


Hog Rider + Royal Giant: Use your Inferno Tower against their Royal Giant and Minions against their Hog Rider. Be as aggressive as you can to force them to defend. Try to chip their tower and then go in for a huge push.

Hog Cycle or Miner Cycle: Just play defensively until 2x Elixir and beat them with a huge push by planting Balloon in the back. When it comes to the bridge, place a Miner, a Princess and be ready with a Zap and Freeze.

Air decks: Try to beat them in the best way you can by being defensive and then launch a counter push. Or try to get the draw.

That was it for my guide. Hope you all have a good day and write in the comments if you need any help with the deck or ask for any substitutions.