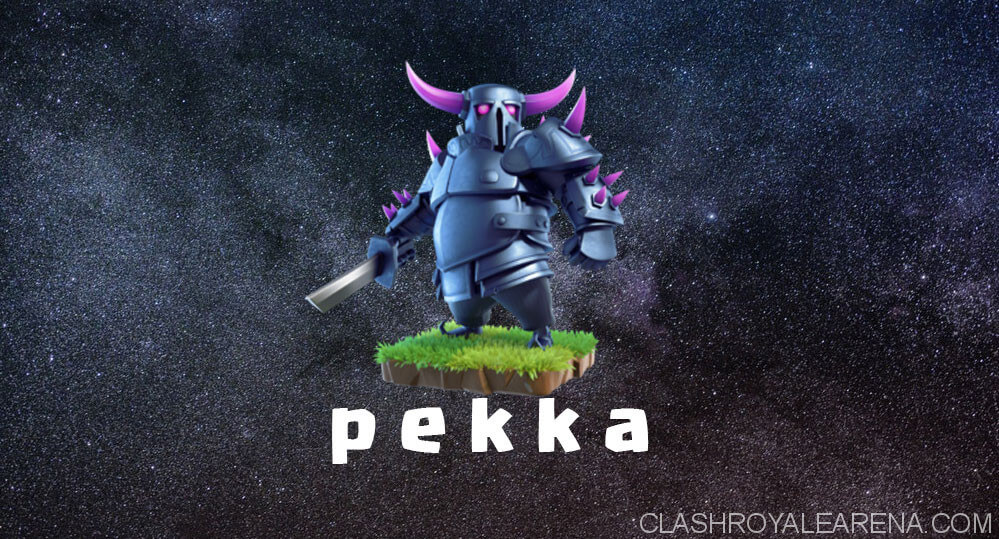 Hello guys! Bull3tst0rm here back again with my PEKKA GY control deck. I designed this deck in such a way that this counters current meta. In my opinion, it’s always better to go against meta being prepared for what we are about to face most of the time. Hope you guys enjoy!

I get it. This is clearly a P2W deck as it is Epic and Legendary heavy deck. However, this deck will completely dominate Grand Challenges and when decently leveled up, will work on the ladder as well.

P.E.K.K.A: With the rise in Giant, Prince, Dark Prince usage rates, this monster will stop any ground troops in their tracks while you can relax! (for those who are dumb, tracks-relax. rhyming words: v :p).The purpose of this card in the deck is to gain HUGE elixer advantage on defense and tank for our Graveyard on offense. She is by no means a win-condition but a means to make the win-condition work. She is basically a defensive wall against ground units and a tank for out Graveyard.

Graveyard: I will define Graveyard the same way in any deck guide with a few additional advantage/disadvantage this card has in the current meta and deck we are talking about. Ever since its introduction to the game, the graveyard has been used widely at the top arenas and even the low arenas. What makes this card an excellent pocket card(google it) is the fact that you will most likely know what cards your opponent has in their deck to counter your graveyard before you use it. This lets you do massive damage when you know that their counters are out of the rotation and your opponent can’t counter it.

Baby Dragon: The Baby dragon is a balanced card. The fact that baby dragon has a little bit of tank to it can be a huge advantage for only 4 elixir as it can be our secondary tank for our Graveyard. You can use the baby dragon as a starting move as this deck suffers a bit with starting hand issues or you can use it to destroy cards such as minion horde, minions, skeleton army, goblin gang, goblins, archers, dart goblin etc. This burping beauty’s synergy with Tornado is insane and can take out mid size pushes with ease.

Tornado: Such an OVERPOWERED card(broken?!) which has a great synergy in this deck in particular. The Tornado pairs well with the P.E.K.K.A. since the Tornado can pull ranged units that the P.E.K.K.A. usually has a tough time getting to, allowing the P.E.K.K.A. to finish it off. As I said before this card+Baby Dragon is a great combo as well. As we all know, it can be used to activate King tower. Tornado along with ice spirit can completely shut down Minion Horde, Balloon, Hog etc.

Electro Wizard: Electro wizard is such a versatile card which spawn with a zap, his every attack stuns the troops which makes him the obvious choice considering the increase in Prince usage, he targets got air and ground and having a decent amount of damage. The only thing I hate about him is the fact that he is fast that renders him ineffective as an opening move but his defensive capability is outstanding and if he is alive after a successful defense, it demands a response from the opponent as he does 200+ damage. With right time electro wizard, spawn zap can kill or damage(based on level)all goblins in a perfectly placed goblin barrel.

Poison: With the rise in spawners, this card gains more value in the current meta. This card acts both as a deterrent to GY when played against us as well as a synergic unit to kill squishy troops as well as Glass canon used to defend our Graveyard. This spell along with tornado helps to completely shut down Three Musketeers if the split is giving us a Positive elixer trade). After the current update Poison becomes an effective counter to Elixir collector as it is a neutral trade.

Goblin Gang: Skeleton army is still inferior to goblin gang. Although GG’s damage output is lower, it is zap-resistant, it’s a bigger threat card, and it can at least partially target air.

The current nerf in no way made this card useless or inferior to skarmy. As I always say, Goblin Gang offers way too much value for 3 Elixir. It takes Goblins and Spear Goblins out of the question.

Just place it in the middle when a push approaches, and just watch the positive Elixir trad.

Ice Spirit: This is basically a cycle card which has so many other advantages and micro play capabilities. When placed right, it can completely stop an incoming Ice Wizard, it will stop one wave of fire spirit and jump on the next wave, it combined with Tornado can stop Minion horde and much more. This card can also stop the charge of Prince, Dark Prince, Battle ram and sparky.

The plan is force opponent to make the first move so that we can defend and counter push with or without Graveyard based on the circumstances(considering the elixer advantage, opponents counter to our Graveyard ).

Sticking onto defense without revealing Graveyard for 2-3 moves is recommendatory.

If the opponent has a ground-based deck, defending with P.E.K.K.A and counterpushing will do the job.

If the opponent has air based deck a.k. A Lava hound, it’s important to stagger the troops on defense so we don’t give Fireball or lightning value and counterpush with Graveyard + Poison if necessary.

It’s a pretty straight forward deck which allows us to defend and counter push with Graveyard + Poison during Double elixer with ease.

Giant Prince Poison:- It’s a pretty even matchup even though we can completely wreck opponents push with P.E.K.K.A just because opponents deck has Poison. It’s imperative to wait till opponent does with his poison on offense before we go with our Graveyard. Try to bait opponents poison on defense by using Goblin Gang or Electro wizard so that we could obliterate opponents tower with Our Graveyard+Poison.Graveyard+Poison is mandatory while counter pushing has opponent has Guards.

Log bait: At first we might think this deck is at a disadvantage considering average elixer cost of our deck. We can clearly dominate this game if we play properly.

Use Tornado to activate King Tower with Goblin barrel.

From the next round and on use Electro wizard + Ice spirit or Goblin Gang to completely counter his barrel.

Wait till opponent gets cocky and throws Rocket.

HUGE PUSH with Mega Knight + Hog? Pekka for Mega Knight and use Goblin gang deliberately to bait out opponents Poison and then counter push with Graveyard + (hovering the Poison for Bats or Tornado).JeeJeeDoubleYouPee!

LavaLoon: I don’t want to lie…In the hands of an excellent LavaLoon player, nothing can be done. It will end us as an excruciating defeat for us. But I will brief out the mistakes that a LavaLoon player might do and how to exploit the opportunity.

The opponent has 3 Counters to our Graveyard.

Basically, the opponent starts with Tombstone on one lane and goes with Lava on the other.

We should not go with Baby dragon + Graveyard on the other lane as we need Baby Dragon to defend LavaLoon Push along with the help of Tornado.

I will play this game as a race to finish if the opponent plays Tombstone as an opening move by playing P.E.K.K.A in the lane opponent played Tombstone and continue with Graveyard+Poison. This gives us a decent chance of winning based on what the opponent does. If we go with his own LavaHound on the other lane, the chances of our victory are pretty high but based on our cycle.

Golem: After the current update, Poison gives us a neutral trade against Elixer collector. This is HUGE as there is no way for the opponent to gain elixer advantage other than trading damage for elixer. We have PEKKA for his golem and defending will be a child play. With that counterpush with Graveyard + Poison to get the W.

Siege: I just wanna compile X-Bow as well as Mortar as the difference is miniscule against this deck. We could just use P.E.K.K.A as well as Poison to annihilate his push and add in Graveyard if you can (considering elixer as well as opponent’s cycle) to get the win. Siege deck usually has Inferno Dragon. Since we have Electro wizard in our deck we could deal with it effectively.

If you guys want walkthrough against any other deck lemme know in the comments.