It’s KPK back to CRA after a really really long time. My last posts were in August, and I hadn’t played for quite a while. But now, I came back with a Mega Awesome Mega Knight Spell-Bait deck which is really deadly!

It uses 4 Legendary Cards on the Contrary, out of which two can be replaced, so let’s hop on! 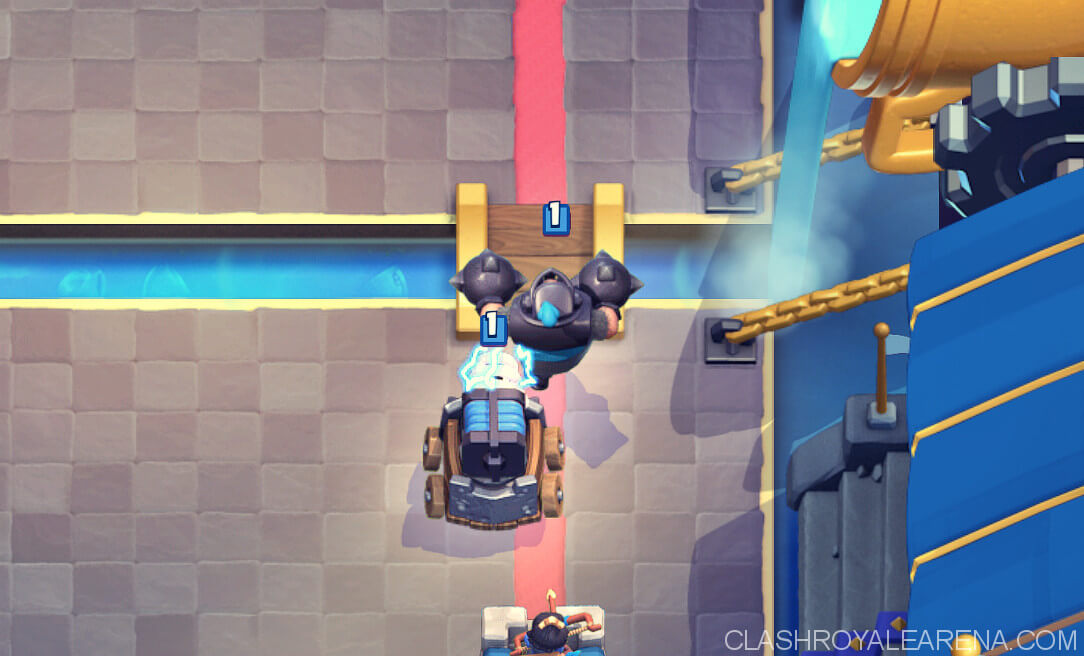 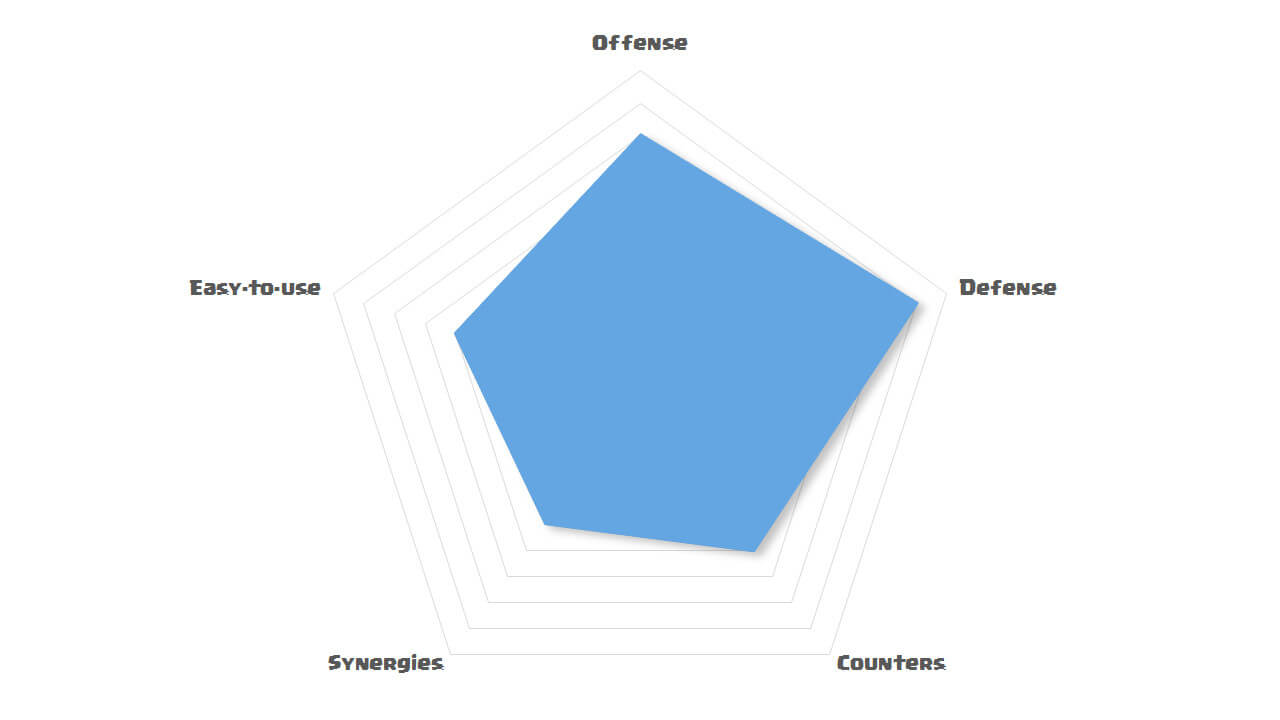 A Solid Whopping Ton of Damage on a Mega-Jump and on birth.

The Mega Knight isn’t entirely a P.E.K.K.A or neither is he a Bandit. He is more of a Control Card rather than defense and offense.

So, just crush those Hog Riders and Counterpush. Mega Knight can proceed once he finished his defensive job.

Say a PEKKA is coming towards you, try utilising the Mega Knight’s jump damage and few other cards to somehow wear-out his best counter.

Well, she no longer is a “Trash Can on Wheels”.

Use Sparky to crush Giants ,Golems, PEKKAs and lots more! Plus, She adds up to some quantity of Spell-Bait as well.

Really useful card. He does a lot more than just tank and spank.

He wrecks down mean Elixir Collectors, stops those Pesky Princesses on the Bridge, and chips off a lot of damage when left unattended.

The Electro Wizard has been on the Legendary Leaderboard for quite a long time!

Not many people use a Dart Goblin, but in this meta, he’s a darn good chipper off the block (pun intended)!

His long range helps him to snipe down enemies before they can even touch him!

His Ultimate Chipping can also make him a useful card to play when you have nothing else to do.

Yup! The Regular 3 Green Mean Ones, and NOT the Gang.

3 Goblins can do a lot more compared to the Gang for Positive Elixir Trade.

Miner’s best friend. Helps him to swish down pesky swarms and deal around 500 damage to the tower.

I wouldn’t recommend Fireball as an alternative but Poison does a pretty good job here, who’re we kidding?

A great card, ever since Bats got a bit annoying.

This isn’t purely an offensive deck. So hold your cards before making a move, or a Hog Rider will mow down your Tower.

Always, stick to a starting move.

Few of ’em include Dart Goblin on the Bridge, Electro Wizard behind your King Tower or Sparky behind the King.

However, if your opponent Rockets your Sparky, remember to NEVER play her again near your Princess Tower.

First, understand their 8 Cards, their main win conditions and their counters to your pushes.

Defend every push that your opponent makes.

This is done by not overcommitting your Elixir towards the offensive boundaries.

Just build your pushes after every counter.

Say the Mega Knight defended against the Hog, now play Goblins and E-Wiz behind him and Miner on the NON-TORNADO Zone of the Princess Tower. That way, your Miner chips down/tanks for you and the other troops whack down stuff!

Keep Poison and Zap handy, since this push is bound to consume some hefty load of elixir. But, don’t worry. A good opponent will take time to counter you, which will give you enough time to get atleast 5 elixir.

Say Sparky and Goblins, countered a Giant Night Witch Combo. Then, try playing Mega Knight in front of her, and E-Wiz + Dart Goblin or something similar. A simple, sensible synergical push which doesn’t leave you in taking up damage.

Now, start building your pushes on that lane you have been attacking.

Say, Sparky behind King Tower, then Mega Knight in front of her. Then E-Wiz 4 tiles behind this PUSH to prevent a Positive Trade Fireball.

Play Miner+Poison combo where the Poison surrounds the Miner. Meanwhile, play Electro Wizard and Goblins to give your opponent a smile of defeat on their face.

Once a push is done, just stop. Too much rush, might as well trigger a Hog Rider down the other lane.

If you aren’t able to counter their push that easily, just watch for their playstyle and your mistake-ful counter.

There is always a different way to handle that push.

Say, it’s a Battle Ram Bandit kinda Combo (the typical Bridge Spam), and you think E-Wiz and Goblins is sufficient rather than Mega Knight to not WASTE Elixir.

But, think twice! Saving your tower is more important than focusing on Elixir.

So there is always more than one way to defend against a push, especially in this deck.

This is a Spell-Bait deck!

It’s more of an easy-to-use hybrid deck of Beatdown and Spell-Bait.

Play Sparky (which defended a push for you), and Miner.

The opponent Zaps the Sparky. Then, play E-Wiz and Goblins to completely annoy the Spell-Bait portion.

Spell-Bait is about annoying your opponent. It might be Mega Knight with Dart Goblin and Poison.

Once the Dartie is Logged, you can play Goblins along with an E-Wiz for change and get them to the Tower freely.

Your Opponent might be up in elixir because of:

Your key way to stop this problem is with the cheapest trade you can make. Better to always play a Miner.

If it is a 3M deck and you Poison their Pump, they might play 3M, and you may feel so much of just throwing your phone.

Well, you might have a Mega Knight in Cycle with your luck, but always try Miner for the Collector since he does a Darn Good Job.

Same thing for against Spawner Buildings except Tombstones.

Miner first! Poison Next! Phew! That was Simple!

A costly mistake often give the opponent the elixir hand.

At these times, find the card which might be the common counter to your problem.

Say it’s Night Witch and Bandit and Battle Ram. Play a Mega Knight to give a better solution and get yourself a better hand.

Mega Knight ain’t like a PEKKA where you MUST make him CROSS THE BRIDGE! So it doesn’t matter.

Mega Knight it in the center to prevent a single hit off your tower and counterpush.

In a Hog+Ice Golem combo, if your Sparky knows it ain’t getting Stunned, then this your best shot. Or Mega Knight + Goblins might seem to do the trick! Counter push is important.

Don’t focus on the Elixir Trades!

Sparky is your zesty counter to this along with some BBQ Sauce prepared by the E-Wiz.

In Giant + Night Witch, play Mega Knight to first damage both of ’em and then use Goblins.

Keep Poison in hand if it’s a tank and spank!

A high Level Zap wipes out those Green Goblins.

Princess can be wiped out with a Mega Knight’s Spawn, E-Wiz Spawn, Miner, Dart Goblin or Goblins.

Spell-Bait has 100% chance of getting REKT (wrecked) with this deck.

First, kill the Pumps with Mining it or Poisoning it.

Sparky does a pretty good job, but in a Lightning deck, it’s the MK!

Use E-Wiz and Goblins to distract the Glass Cannons.

Any PEKKA at Tourney Standards can’t take more than 3 Blows from a Sparky. Play Goblins to kite the PEKKA.

Goblins, Poison, Dartie….. I can extend this list forever!

To completely stop his thought processing, play Mega Knight and Poison in the opposite lane.

Then, use Electro Wizard and Dartie to stop the Lava Hound.

Miner does some work on the Pumps, and the Mega Knight swipes the Musketeers home. 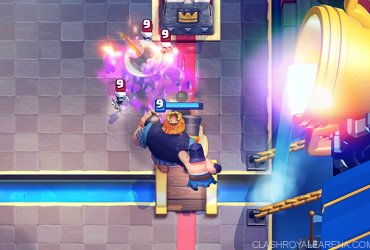 Hey guys. Lolman here with a new guide for you guys, a guide about my new devastating Royal Giant deck. Now I’m currently pushing my main deck on ladder with … 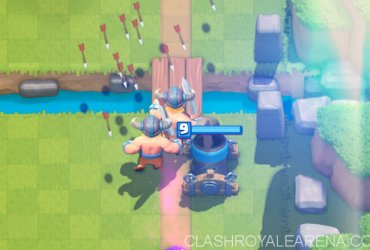