Hey guys, it’s yours truly, NebulaNoodle, back at it again this time with the focus on a more off-meta deck.

This one combines the deadly duo of the Mega Knight and the Mortar.

I actually just got the Mega Knight a few days ago from the shop, so here’s a nice way to showcase this big daddy! Hope you enjoy! 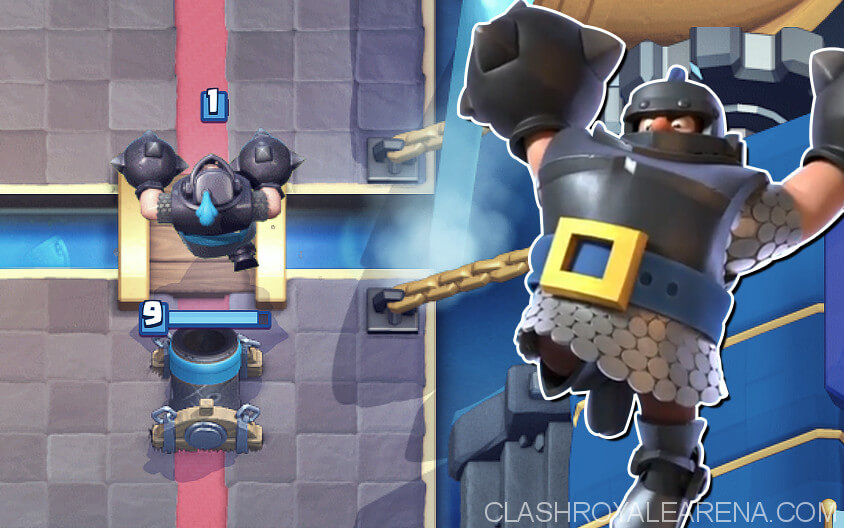 Your main win condition, you could actually also consider Mega Knight a half-win condition (sort of like E-Barbs.)

Great for chip damage, hopefully you’ll be able to lock onto the tower, because then it will be extremely hard for your opponent to get to the Mortar unless they kill it with a spell!

Protect the Mortar, but know when to let it go. Don’t overcommit and be left vulnerable to a huge counterpush.

What’s a Mega Knight deck without the Mega Knight?? Jumps on enemies with a satisfying clunk.

Synergizes well with the Mortar due to the fact that the Mega Knight protects the Mortar from large swarms and he is very tanky.

He is weak to the PEKKA so your Minions will really help killing the PEKKA and other support troops your opponents has.

This card works extremely well placed preemptively with the Mega Knight as part of a big push.

Works wonders against Minion Hordes, Goblin Gangs, and the like attacking your Mega Knight and Mortar!

Its large AoE means that it can provide huge value and possibly give you big elixir leads!

It may seem strange that Ice Golem is in this deck but you won’t really be playing your Mega Knight too much before double elixir, so he is a nice tank for the Mortar in single elixir for slow chip damage.

His death damage kills Skeletons and Bats, and is an awesome kiting and distracting troop.

Even though she two-shots them, she works very good against Minion Hordes due to her pretty fast attack speed.

Take advantage of her long attack range, use her to snipe away at troops attacking your mortar.

She works nicely with Mega Knight along with Minions for a counterpush, just don’t overcommit!

This is an amazing defensive card! Pull Hog, Giant, Knight, E-Wiz, Valk, Miner, Goblin Barrel and the like to your king tower and watch your opponents cry.

If you manage to activate the King against a graveyard player you barely have to defend their graveyard, the King tower can snipe away easily at all the Skeletons.

If you don’t know how to activate the E-Wiz to the King, just pull him to the corner where one of his split attacks will hit the King!

Tornado also is amazing with Mega Knight, so he jumps and wrecks all the clumped troops. Great 10 elixir combo against near-unstoppable pushes. Tornado also works well with Poison, to keep troops from running away from the Poison so your Poison can get more value.

Read more about the Tornado at here!

You can replace these cute doots with Goblins but I wanted to keep the deck as cheap as possible.

They still offer really nice value to distract and to cycle quickly to another Mega Knight or Mortar.

Your other strong-anti air card. Weak to spells so place them away from your musketeer against, for example, lavaloon decks so your opponent can’t get a value fireball or poison or whatever.

I chose these guys over Bats due to their Zap resistance and they do a lot more damage. They still offer huge DPS!

NEVER EVER play a Mortar at the bridge unless your opponent gives you a chance to punish as he can easily counter your Mortar, having 10 elixir in hand.

This is a hybrid deck so you can play this deck two ways: Passive siege or beatdown.

That’s what I like about hybrid decks; you can play one archetype style then stun your opponent!

Only use your Mega Knight in single elixir as a reactive move to a big Giant/Golem push.

You should be making Mortar pushes like Ice Golem+Mortar+Minions, without overcommiting and leaving yourself with no elixir to defend.

I see a lot of people spending so much elixir trying to defend their siege weapon that they end up having only 2 or 3 elixir to stop a Pekka and Miner combo, for example.

Mistakes like these can easily cost you a tower, and I feel like hybrid decks can be extremely difficult to play if you don’t have the right feel for them because you have to think: Do I want to play this deck this style or that style right now?

Around mid-game you should be cycling your Mortars by using Skeletons/Minions.

Try using Poisons right in front of your Mortar, so even if your Mortar dies you can get nice value against their troops.

If you are struggling with tower damage by this time, don’t use this tactic.

Remember, this is a hybrid deck so don’t be afraid to try out different tactics than what one would usually use in a single archetype deck.

Use your Mega Knight to defend your Mortar, he is very tanky and splashes everything trying to kill your Mega Knight. Combined with the Poison and one of either Minions or Musketeer.

Use Tornado to complement your pushes.

Here’s an idea: Place the Tornado so when the Mega Knight jumps on the troops, he also hits the tower and deals massive damage with each strike following as well!

In late game/overtime, build up big pushes, just spam everything behind the Mega Knight.

Even if you have no elixir, you have so much elixir on the field that your opponent will struggle to counterpush.

Overwhelm them with more Mortars, and just keep cycling Poisons and Mortars for the win!

Minions work nicely against the Balloon.

Use Tornado appropriately, and Poison the Minions/Minion Horde. Keep your Musketeer in hand for their support troops, and if they have ground troops in their pushes wreck them with the Mega Knight!

Use Mega Knight+Tornado to kill their glass cannons, and use Minions’ huge DPS to take the Golem out!

There’s no building, but this deck is totally fine without one.

It’s a little easier because the Giant will die faster (less health) and you can go in for counterpushes faster.

Use Poison against clumped up swarms.

Mega Knight just wrecks everything on the field, it’s like a VERY hard counter to bait.

This should be an easy one.

Against Hog Cycle, you should try to keep up with the counters. If you can place Mega Knight correctly the Hog will get no swings on the tower.

Against Hog+Mini Tank+Glass Cannon push, the Mega Knight just wrecks everything. Use Minions to clean up the leftovers.

Against Miner decks, try to learn your counters again. Ice Golem can kite PEKKA away so it will be easier to counter the Miner with, say, Musketeer. You shouldn’t worry about the Miner as much, instead focus on countering their tank and support. Counterpushing is especially important against these decks.

Against other Mortar decks, like the classic Mortar Rocket, don’t give them spell value. Mega Knight counters Mortar well, as he splashes and severely damages all the squishy troops protecting their Mortar. After you defend, just place a Mortar behind everything and watch them cry!

Against X-Bow, you have nothing to reset the X-Bow’s target so at all costs don’t let the X-Bow lock on because then you will have to spend so much elixir trying to defend that you will have no elixir to punish. You can easily get losses or draws against these decks.

Against Royal Cancer, Mega Knight will wreck their support troops. Don’t use too much elixir defending as I see many people without buildings do. Instead, go in to counterattack and crush!

Against Elite Cancer, don’t worry! Mega Knight hard counters E-Barbs, even if they are raged. Musketeer does a nice job sniping from range against their Valk/Exe or whatever splash unit they have.

Thank you all for reading my guide, I hope you enjoyed! Stay tuned for my next guide, but that’s another time.

Until next time, goodbye from NebulaNoodle!