Hello Everyone! This is Adam, here with my first guide as to why the Mega Knight is going to be so good! Let’s get into it! 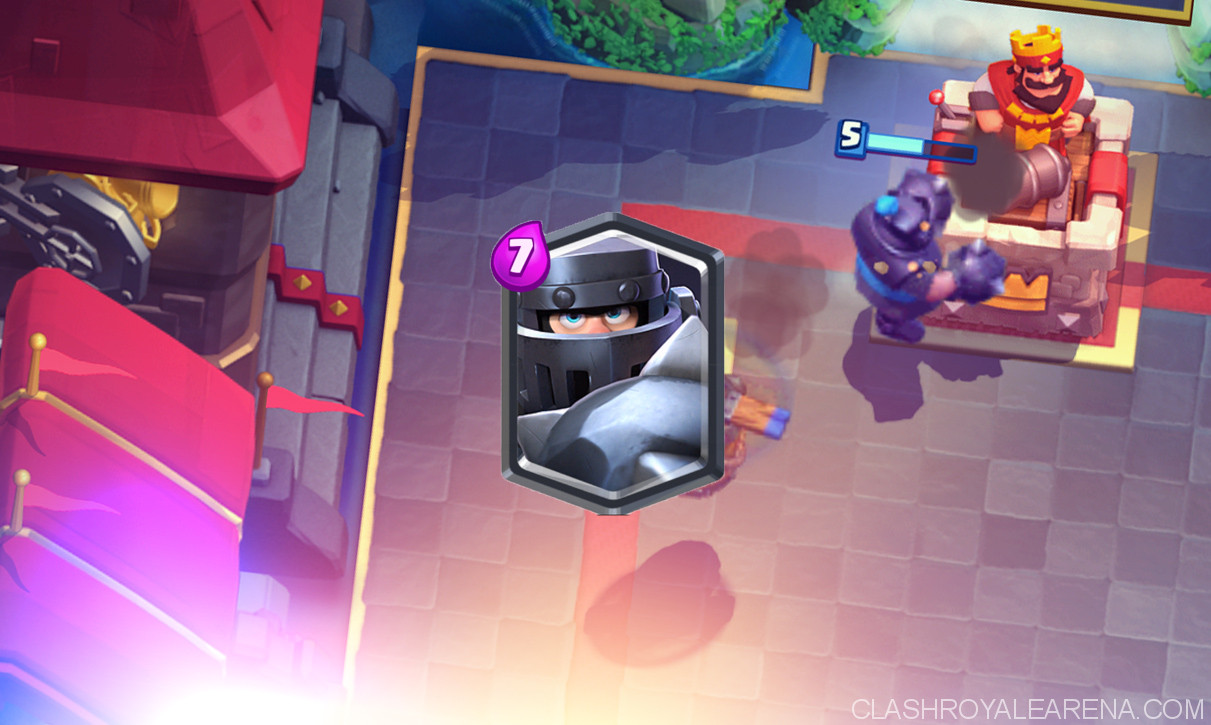 Disclaimer: The Mega Knight may or may not have been released by the time you’re reading this, but it hadn’t released when I wrote this, so this is purely theoretical.

Why does the Mega Knight seem to be so good?

The Mega Knight is a troop-targeting tank. Needless to say, these cards are not very popular. No one really likes the P.E.K.K.A or Giant Skeleton much. Sure, they can be fun to play, but probably won’t see nearly as much use rate as Giants or even Golems.

The Mega Knight is different. For one, it’s a splash damage troop. As soon as you kill the card supporting the Giant Skeleton or P.E.K.K.A, it instantly can be swarmed. The Mega Knight on the other hand can easily take out most swarms, despite it’s slow attack speed.

For another, it has mobility, mostly in the form of its jump. Now this allows it to jump from troop to troop without having to slowly walk up to it like the Giant Skeleton and P.E.K.K.A. Not to mention its speed is medium (that of a Baby Dragon) instead of slow like a P.E.K.K.A.

It can also 1 shot almost all low health cards using its jump (and if it can’t then it can kill them with one extra swing), such card include the Ice Wizard, Cannon, Musketeer, Witch, Wizard, Tesla, Night Witch, Princess, Bomber, and so on. It seems to me as though this creates a good combination of damage and splash, and like I mentioned before its mobility prevents it from having to slowly walk up to each and every troop.

And finally, it has an enormous amount of HP!

At tournament standards, it has more health than the Giant Skeleton and just ~4% less health than a P.E.K.K.A. This allows it to survive long enough to kill lots of troops. Have you ever seen the video of a Bandit dashing from troop to troop, killing them all in 1-2 hits? A Mega Knight is like that, except it has like 5 times more health than a Bandit.

Let’s compare the statistics of the Mega Knight to some other troops!

The P.E.K.K.A has almost the exact same health as the Mega Knight (it happens to have a tiny bit more, however).

The big difference is that the P.E.K.K.A deals more damage, while the Mega Knight favors mobility and splash damage.

In a 1v1 the P.E.K.K.A would win just about every time, simply because it has nearly 3 times as much DPS, despite the fact that they both have the same attack speed.

On the other hand, against most troops, the Mega Knight would do much better because of its mobility and because it’s so difficult to distract (at least it’s harder to distract than a P.E.K.K.A).

The Giant has 1% higher health than the Mega Knight, so it’s practically the same.

The big difference here of course is that the Giant targets buildings, and costs 2 Elixir less, but they’re both tanks.

Basically, I prefer the Mega Knight because it can fend for itself. True, an Inferno Tower or basically any air can take it out but the Giant must have support, or else it can be defeated by 2 Elixir Goblins. Also, the Giant doesn’t protect their support quite as much; if someone places a Mini P.E.K.K.A behind the support troop then the Mega Knight will probably turn around and attack the Mini P.E.K.K.A (as long as it isn’t already locked onto a target).

That being said, the Giant costs 2 Elixir less than the Mega Knight, and is harder to distract, so it’s easily debatable which is better.

The Giant Skeleton’s only advantage is that it costs 1 Elixir less and carries a Giant bomb.

It has a slightly higher attack speed, but its damage is pitiful and it has ~28% less health than a Mega Knight. It also doesn’t have a Jump ability and it doesn’t do splash damage.

Even if you do get it to the arena Tower, a single Tornado can pull it back out of range.

Mega Knight + P.E.K.K.A + Executioner would be a formidable force indeed.

Remember the P.P.P days? It’ll be like that but way more expensive (it even has 2 epics and 1 legendary!)…

On defense, this guy probably won’t be quite as good as he is on offense.

He can, however, quickly take out a troop and turn into a counter push. The slam ability (that’s what I call the damage he deals when you place him) is enough to kill some low health troops and literally almost all ranged support troops (besides perhaps the Executioner and Bowler) can be killed with 1 extra shot, so it’s great for counter pushes.

It’s also quite good solo, much better than other tanks, however you must watch out for air troops (and occasionally Infernos). Fire Spirits or Arrows should do the trick.

His jump ability makes he really good on offense, and (I know I keep on saying this over and over) its mobility is fantastic, just like the Bandit. Unlike the Bandit he is not immune to damage while jumping, however he can usually take the damage given its enormous health.

All troops have their disadvantages, and the Mega Knight is no different. I’ve been telling you how good it is the whole time, now let me to you the bad stuff.

Other troops like the Giant or Giant Skeleton may not provide quite as much value, but they cost less. A lot of good Mega Knight combinations work really well, but it can be quite difficult to place all the troops.

The Mega Knight might be more versatile than the P.E.K.K.A but it lacks sheer damage. The P.E.K.K.A will win a 1v1 every time, level hardly even matters in those battles. This is because the P.E.K.K.A simply deals more damage (a lot more damage, like ~2.6 times as much damage).

The main weakness of a Mega Knight is its inability to fight air troops. This means that if you can distract it long enough, Bats alone can kill it. Bringing in a spell can easily solve this problem, but are troops can still be a pain to deal with.

I think I’ve covered most of its problems. I know there are probably more, but that’s all I can think of.

Well, that just about wraps everything up. I honestly hope this guide has helped you.

I admit that I can’t promise anything, because to be truthful I’m not a famous YouTuber or a Supercell employee, so I’ve never actually used the Mega Knight, but I’ve studied it a lot.

I’ve put a lot of effort into this guide, so any recommendations or comments are greatly appreciated ☺.

If you have any suggestions or you believe I missed anything, just comment it.

My in-game username, real life name, and Disqus username are all Adam!!!!

Thanks for reading, and be sure to keep updated for more content!