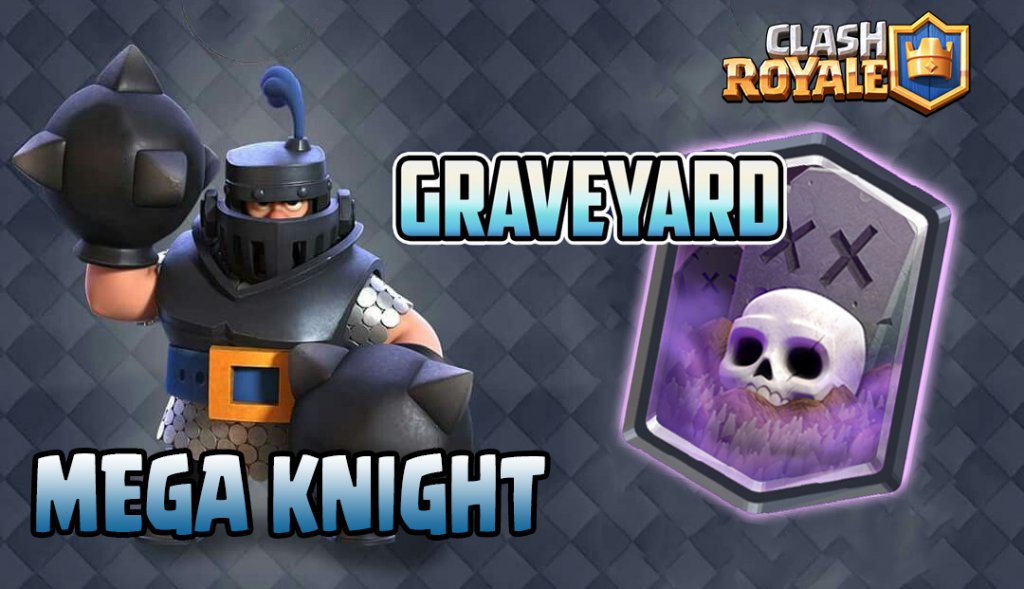 Hey, clashers Curry with Rice here, and I was recently wondering ‘What happens when you combine a mega knight with a graveyard?’

I decided to test it out and made a  deck that will ultimately dominate.

However, there are a few things that you may want to consider when playing this deck

Don’t get all smart and cocky with this deck, you need to play it accordingly. If you sort of mastered it, you can play it whatever style suits you best, but if you are a beginner at this deck, then play along to the instructions

Most cards you don’t need to care about the card level, but there are a few cases where your cards may be shot down immediately. Then, you’ll know that you need some upgrading.
Alright, let’s go to the deck!

Mega Knight: Obviously. This card is a total beast, with it’s high health, decent damage, and it’s splash range. Drop this card on a bunch of class cannons and you’ll get a positive elixir trade. However, if you think your opponent has a three musketeer in their deck, save this card to drop it on the muskets. Don’t let your opponent out cycle you though.

Graveyard: Your main win condition for this deck. Once you are sure your opponent doesn’t have any more counters, drop the graveyard once you have a tank (most preferably mega knight) This combo will most likely guarantee you a tower, and if paired up with a miner (for the tank) or an inferno dragon, you can get an easy three-crown.

Miner: AKA Chipboard, use this card as a tank. That’s pretty much all to it. Or, you can use this card to take out elixir pumps, spawners, or annoying class cannons.

Inferno Dragon: Melts the hide off of tanky cards. When counters (such as electro wiz) come, drop that mega knight. Can also be used as a support to your pushes.

Bats: The goblin with wings! Use this card to take out ground-only cards, distract troops, or as a assist.

Tombstone: This may seem a little weird in a deck this, but tombstone is the card if you want to distract hogs, giants, or the inferno tower/dragons.

Arrows: I chose this card over zap because of it’s large range, and its potentiality to take out princesses/swarms. Don’t get out cycled with this though.

Start out easy, and let your opponent make their move first. The main point of this deck is to analyze, counterattack, then dominate. If your opponent puts a golem at the back, take advantage of the elixir disadvantage and drop a miner+bats/graveyard combo on the lane opposite of their push. Continue and play for your opponent’s pros and cons.

Now you should probably know how your opponent plays their deck. Start out with a slow push at the end (or a counter push as your opponent may attack when it’s halftime) with a mega knight, an ice wizard, or an inferno dragon (based on what the opponent plays/will play). Start sending in reinforcements, such as bats or miner, and then when you are at the climax (you’ll know when it’s the climax when your opponent is all out of defenses), send in that graveyard. Keep on playing cards and sending miners to your opponent’s defenses. If your opponent is skilled, he should defend away from the push with just one tower taken away. If this happens, start another push on the other lane. Remember, in this deck, offense is the best defense! 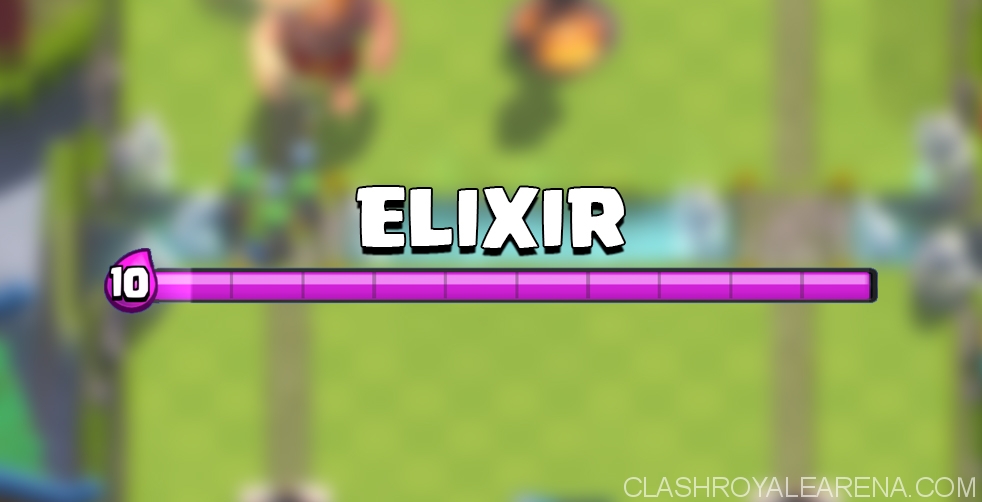 When it reaches overtime, keep on pushing, but know to keep one thing in mind: Your opponent now knows your playing style. You now have to defend (not with offense), or simply change your playing style. For example, if you are one of those people who like to make a big push at the back, now immediately start a push on your opponent’s side. This will force them to over-defend, and if played correctly, you will beat all of their defences and get that tower.

Things to keep in mind:

Do not overspend. You will find the punishment is you do, as this deck is not cheap. However, do so only if there are these circumstances: You need that tower down and it’s almost down, or if you need to defend vigorously. If you do not manage to follow these rules, well, as the saying goes, the only way to learn something is to experience it.
Do not play cocky. NEVER underestimate your opponent (unless they show that they are a true noob by trying to heal their towers with a heal spell, clone their towers with clone spell, or fire at your troops but is off the mark by a mile). Do not send emojis unless your opponent does something so stupid or funny that you just have to laugh. In some cases, I repeatedly spam emojis with a mega knight+  inferno dragon coming at them to try and get my opponents off guard and send emojis back. If they start, I immediately drop the graveyard and hold onto my miner for their late reinforcements.
BELIEVE IN YOURSELF!!!!!!! To be truly successful with this deck, you have to believe in yourself. Don’t rage after a lost battle and be like ‘this deck sucks so much!’ You have to get used to this deck and your opponent’s reactions. For pros out there, you’ll get the hang of this deck in a few swings, but for the beginners and the not-so-good players, keep on practicing and trust in yourself.
Replacements:

Mega Knight: Kind of recommended, only if you don’t have mega knight.

Dark Prince: This is only for people with no mega knights but will like to try this deck. Play as safe with mega knight, but one thing changes. You can no longer drop it on a bunch of glass cannons and expect it to kill them, know you have to rely on its charge.

Pekka (not so recommended): Play as if the mega knight, but send more splash ranged reinforcements to aid it.

Inferno Dragon: Kind of recommended, only if you don’t have inferno dragon.

Mega minion: This card has the same function as the inferno dragon, but beware of spells as this card is not tanky.

Miner: Kind of recommended, only if you don’t have a miner.

Knight: The only drawback is that this card can’t be everywhere, but is still good for tanking.

Goblin Barrel: This card may be a little squishy, but send it in once the defence is locked onto another card. Use this card to kill reinforcements or as a chip to the tower, or spawners.

Graveyard: Not to recommended, but only if you don’t have a graveyard

Battle ram: Since out goblin barrel is taken, use the battle ram to wreck towers. Can also be replaced with the hog rider.

Ice wizard: Kind of recommended, only if you don’t have a ice wizard

The other wizards: They each have their own drawbacks but I chose the ice wizard because of it’s splash, it’s ability to slow cards down, and it’s health. However, if you wish to replace this card, use another wizard to take it’s place.

Tombstone: Not too sure about those switches, buddy…

Tesla: It can take care of cards as well, but it doesn’t spawn things, unlike the tombstone. Can also be the inferno tower.

Bats: Okay, if you want tank supports that won’t fall to zap

Minions/horde: It’s best to choose minions since minion horde will make the deck really heavy, but if you like the idea of a heavy combo that will take everything down, use minion horde.

Arrows: Not recommended, seriously, don’t do it bro

Zap: This does less damage though, and it can’t take out minion/hordes.

Fireball: This deals more damage at a smaller area but is more expensive and any one of those.

Tornado: This card may actually be a good replacement, unlike the others so don’t mind the warning with this card.

Any sort of golem deck (if the opponent knows how to use it). Take out the golem, with inferno dragon and then it’s supported with mega knight. Wait until your opponent’s night witch (doesn’t apply if they don’t have one) to die, so you can arrow all surrounding troops. Send in bats if they have aerial troop (you have to be smart if they have baby dragon and send the bats in aways from the baby dragon’s radius).

Yeah, that’s pretty much all these decks fall to.

Phew, that took a while! Good luck clashers, Curry with Rice out!