The Ladder Deck That I Love!

Hello everyone!! I am Splendid Spaloh, my IGN is Splendid_Spaloh and I am an arena 12 player. Recently I reached arena 12 with this amazing deck after I bought the new tank: Mega Knight. This deck is certainly no ordinary in my opinion as it got me up 800 trophies with ease even though my commons are level 10 and my rares are 7! I’d recommend anyone that is stuck in the long gap of between arena 10 and 12 (or anyone who’s been around 3400) to give this a shot.

Mega Knight: Mega Knight is the core card of this deck. I stayed living with 40k for 2 months before receiving him and I was certainly pleased for waiting so long.

Mega Knight must not be used directly at the start or to stop a weak push, this deck is quite a power on defense and control and could counter Spell-Bait and Cycle Hog decks quite solidly.

Avoid starting him from the back, I have a fear of regretting to place him as his spawn damage is vital for many cases, use this on rams, Ebarbs, a ton of glass cannons at the back of a tank or a solid hog push if you’re really struggling. He should be played with at least one card supporting it (as that’s how I manufactured the deck).

Mega Minion: Another great card, mostly for defense or starting the game I start Mega Minion from the back to be able to utilize it against rush defense by luring things in its range. Mega Minion could be combined with Bandit or Goblin Gang to take out significant cards from their strategy.

Electro Wizard: Hard card to use, on paper he’s hour 2.5th spell and could be used like that in certain times, I prefer not to use him on cheap defenses against cards like Miner or Hog but rather a power push, enforcing Mega Knight and Mega Minion’s slow attack.

E wiz has always been a swiss army knife of a legendary as it could take significant damage on a tower with any card or simply take the tower too, it could slow down pushes so everything gathers about in one spot for the MK drop or help MK take down Inferno Tower/Dragon.

Bandit: Bandit is my all time favorite! Even though she does not currently have a place in the meta she is a truly powerful card, she is our x1 elixir attack card and chips off the tower by counter attacks or eating cards like Princess, Bomber or Dart Goblin and if you know how to use her invulnerability and dash range right, Muskee and E/Wiz.
She could fill up the missing damage of MK’s leap, finishing off glass cannons, spirits or other cards that have one shot potential. Make sure you know how to use her range well to use her invulnerability and know that she could land a dash hit with two ticks of health.

Goblin Gang: Now, don’t worry about the level of this card, it’s absolutely nothing to worry about, my GG is level 10 and it still functioned very well. This card is our support card that roughens the defense choices our opponent will make, wastes their zap or log so our MK/Bandit charge attack is safe or bats supporting the air.

You could also always use this card as a punish card after a Golem or Pekka as you don’t necessarily need it always to finish them off once they reach our side.

I strongly suggest that you don’t split GG into two in this deck.

Bats: Great support/Defense card, just like Goblin Gang it is useful for adding it into the fro and gaining some extra power, it is could instantly defeat a musketeer, ewiz or executioner with help from the tower.

I mostly use this card with Bandit to take down Knights down quickly but also use it on any towers in the middle from across the river, especially inferno if the opponent has managed to distract our Ewiz with other cards.

Log: Log is my most played card (in my stats) and the best spell in the current game, doing an entire cheap elixir trade with the top three Spell-bait cards: Goblin Gang, Princess and Goblin Barrel. Log is good to stop Princes from charging and making Guards more vulnerable for our chip units to pass through since these two cards are strongly back in the meta game.

Log should mostly be played for Princess as she’s approaching, leaving gob barrels or higher swarms to arrows with it’s speed and AOE. You may use Log if your opponent is keen to combo two cards that get one-shotted by log, like IS-GB, GG-GB, P-GB, etc.

Arrows: A debatable card on whether to use it or not but I prefer not to risk minion hordes and since they’re going back in the meta with double minion giant and some edited spell-baits I prefer to stay defensive to them. A combination of goblins/guards and minions/bats seem to be common in one deck now so it gets both air and ground and wipes them out, which zap cannot do, since not everyone has an over-leveled Zap.

Poison is also too slow and too expensive to risk on predictions and defensively in my opinion, so this card exists for a reason after all.

You could also use this for completing damage of MK’s spawn drop on Glass Cannons like 3M, The Wizards and Executioner. 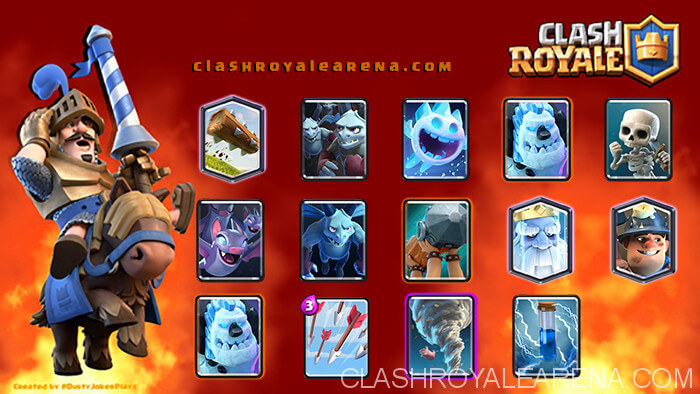 Mega Knight MUST NOT be changed as it is the core card and most cards play around the lines of it.

Mega Minion could be swapped for Inferno Dragon and if you will use zap, Baby Dragon. I do not advise you to swap it with Minion/horde because they are not tanky enough.

Bandit could be changed for Knight (I advise not to), Hog Rider, Miner or Mini Pekka.

Bats could be changed for minions.

Log must stay but could be changed with Zap

Arrows are advised but could be changed with Zap, Poison or Fireball (I don’t recommend Fireball).

I hope you enjoy my deck and it could get you from arena 10 to arena 12 shorter than a week! 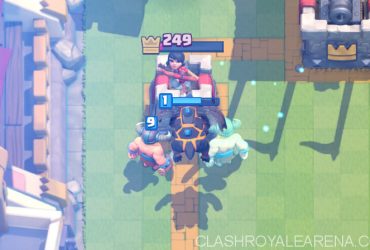 Hello I’m Ehsan aka San from Gaming w/aSan back with another guide on a deck which one of my clan mates recommended.  It’s the first time that I’m actually posting … 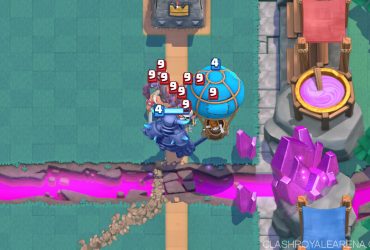 Hey guys this is Sidd and this is my first guide on CRA. I have been trying decks lately and trying to find a unique combo. During my search I …