I know, I’m terrible with Beatdown, and the Average Elixir Cost could make people cry, but once HeroCow sent me a video of his awesome gameplay, I knew I just had to post this! So, without further delay, let’s get into this amazing deck! 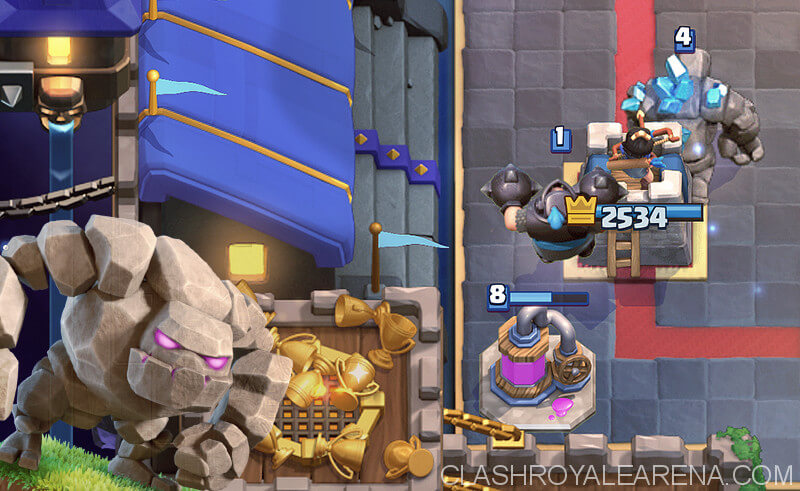 Golem – The main tank of your deck.

He has the most health out of any tank in the game. He also splits into two Golemites that keep the fight going for a little while longer.

When ignored, he has the capability of taking the Tower on his own, and with support such as Night Witch or eWiz, his potential can truly be maximized!

Paired with Golem, he really is a force to be reckoned with, especially since he protects Golem from ground swarms and glass cannons.

He can even jump in front of him to take shots from an Inferno Tower if you Zap it!

If your opponent places something at the bridge to deal with Golem, Mega Knight can jump in and murder it (as long as it’s 4-5 tiles away)!

Overall, he may seem unnecessary, but he plays a big role in this deck!

Night Witch: A staple in every Beatdown deck.

It may seem as though her days are numbered because she’s balanced, but she is still quite good! Despite her multiple nerfs, she belongs in this deck for one reason: her Bats stack!

Paired with Zap, this special skill can overrun high damage units such as Infernos and allow her to get to the Tower extremely quickly!

Electro Wizard: This show off lands with a “POW!”, and continues to impress by Zapping two at a time!

Despite his nerf, he retains the ability to permanently stun, meaning Infernos and other high damage units stand no chance against him!

Overall, he is a mostly self explanatory card.

Mega Minion: An anti-air high damage unit that can always be relied on!

His high damage allows him to take out pesky air units that may give you trouble. This can also be transitioned into offense, dealing massive damage to defensive ranged units like Wizard and Musketeer.

Read more about him here!

Don’t we all know its uses?

These spooky scary Skeletons may send less shivers up peoples’ spines, but they are still great for so many things!

They can distract a whole Skarmy and Minion Horde (aka Punish Horde), surround ranged splash attackers, and whittle down the health of tanks and mini tanks!

Of course! What’s a heavy Beatdown without a Pump?

This is our alternate source of Elixir and a true game changer, allowing us to really have a strategic advantage!

As with any Beatdown, PUMP UP.

You will need any advantage you can get once Double Elixir hits.

Use your cheap cards to defend pushes so you can keep pumping.

Your starting hand/opening move will also matter a lot. Putting down a Pump or cycling Skellies is a great idea, whereas a Golem in the back first thing can actually result in you losing a Tower immediately!

Unleash total chaos! Golem pushes are OK at this time, and the Elixir you gathered from Pumps (if any) can be used as well.

Be sure to put both tanks into your push to maximize the potential of both cards.

Also, since Skeletons are insignificant on offense, save them in case of emergencies.

Giant: With Beatdown, defeating heavier tanks without overcommitting can be issues.

You can, however, use Mega Minion and eWiz to their full extent by using MM to soak for the eWiz.

If necessary, distract support troops with the Skeletons. Night Witch also works as a tank killer because of the ability to stack up pairs of Bats.

Golem: Probably one of the hardest matchups for this deck by far.

You can also use Night Witch+eWiz in case the support for the Golem is something like a Baby Dragon or Exe (you still may need to use Skeletons against Executioner).

This is a slightly easier matchup than a Giant or Golem, as the P.E.K.K.A attacks anything.

This means that Skeletons will distract her for a little bit while MM does the damage.

Night Witch also helps, as P.E.K.K.A Miner Poison and P.E.K.K.A Hog are popular at the moment, and she works well against both troops.

Royal Giant: Night Witch and Electro Wizard are the best options against this cancerous fiend. Use Mega or Skeletons if necessary.

A Beatdown player’s worst nightmare to play against other than the dead Bridge Spam.

Lucky for you, eWiz and the Skeletons work well against these cheap Hog pushes. If there’s a heavy tank supporting the Hog, distract the tank if possible with Skeletons, and use the Night Witch or Mega Minion on the Hog.

Mega Knight also does extremely well, and can deny him completely if placed right!

One of the few decks where you will not have as many issues defensively.

Mega Knight is the easiest way to get rid of them. You can also use eWiz+Night Witch for a positive trade. Against splits, use MK on the two Muskets and surround the other with your Skeletons.

This is another one of the extremely hard matchups.

IF YOU HAVE TO, use Mega Knight to kill the Barreled Goblins. Otherwise, use your eWiz or Skeletons. Night Witch also helps with crowd control.

Also, try to tempt the opponent into using their Rocket on a Night Witch or eWiz rather than your precious Pump.

Wait until Double Elixir to perform an offense.

Shouldn’t be much of an issue.

You have a Night Witch and an eWiz, both of which are good counters to Miner, and can survive such an onslaught.

Use Skeletons to distract any other units, and MM to kill if necessary.

In case of Balloon, use your Mega Minion and eWiz, but don’t give them Spell value either!

Again, use Night Witch for crowd control, and if it’s Lava Miner, use her to kill Miner as well. Kill Hound with MM.

You can use your own Mega Knight, as it can cancel out the other, but chances are, you’re gonna get outcycled.

So, the best plan here is to go for the infamous King Activation! It engages your King, greatly helping in defense, and prevents you from getting outcycled as well!

First, make MK jump using Night Witch (place her at the last possible second). Then, once Night Witch dies, place Skeletons in front of your King. If all goes well, the Mega Knight should jump to the Skellies and walk over to the King, activating him.

So that wraps up this amazing deck made by HeroCow! Leave a comment if you really enjoyed it! See y’all next time!