Hey guys, HS aka derpyboy here, presenting you another guide!

I present to you, the GIANT Mega Knight (happy medium). 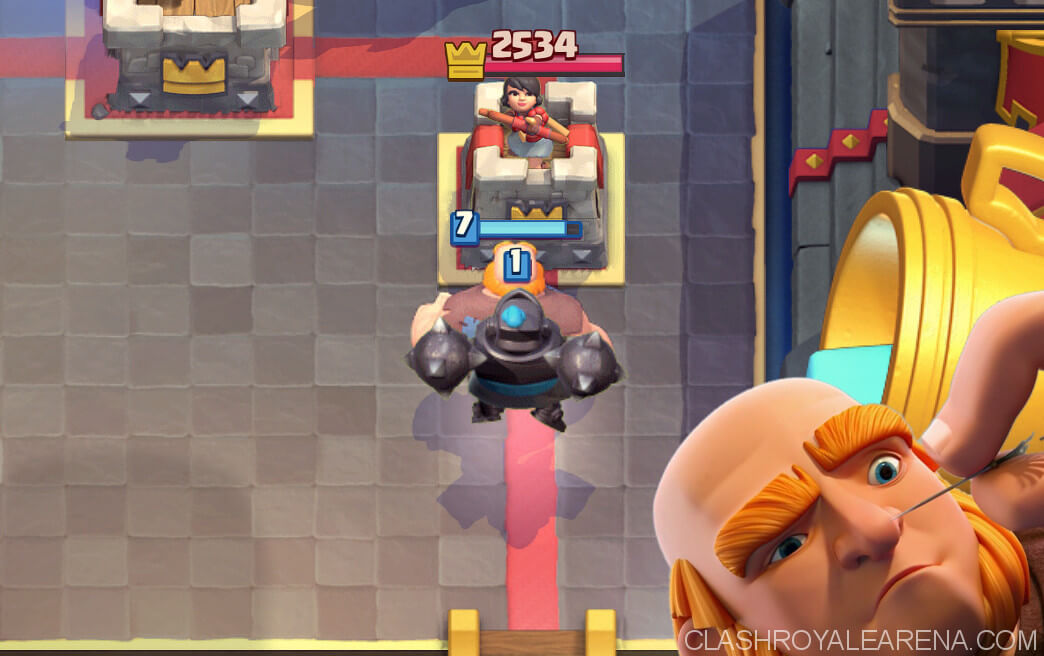 Have you ever tried using a Mega Knight deck without Mega Knight? It’s pretty hard to do that in my opinion.

This guy does a lot of things in this deck.

On defense, his spawn damage helps clean up glass cannons. His splash attack takes care of multiple cards behind a tank, or alone. He can be also used to eliminate a siege building, but Giant is better at that.

On offence, he cleans up the way for Giant and himself. He is also capable of killing Inferno Tower as well(if supported with Zap). But try not to use him, especially on offence, because he can’t hit air, and costs a whopping 7 elixirs.

He is the main offence card since he is very tanky and only targets buildings!

He should be mainly used to tank for other support troops, such as Mega Knight and Electro Wizard.

He can be also used to cycle and rush because he is so cheap! This makes him more safe to play than a P.E.K.K.A or a Golem.

Of course, you can always just rush with a lone Bandit, but he is way more tanky and powerful, just for 2 more elixirs! Don’t use him for defending, though.

He is quite useless on defense because he does not target troops.

This card offers a lot of value for 3 elixirs, and synergizes very well with Mega Knight! In fact, it is in all of MK decks I know, except MK Hog and MK Balloon.

She should be mostly used on offence due to her special dash ability, but she is ok on defense too!

This guy has been keeping the ‘best legendary card’ title since 1990!

Even after the nerf, he is still good because of his ‘stunning’ ability to both slow down and reset troops only for 4 elixirs! Unlike his brother Ice Wizard, he can be used on both offence and defense!

On defense, he can be used to shut down swarm cards with his spawn damage, and kill medium sized troops, such as Hog Rider, Mini P.E.K.K.A, even a Knight!

On offence, he will be your reliable Inferno Dragon/Tower counter!

He can also act as Minions/Bats counter, but I don’t recommend it.

He will be your tank killer in this deck! Since nothing else in this deck deals a lot of damage, he will be vital against beatdown matchups.

If they are using Giant/Golem deck, you should not use him except when defending.

If they are playing P.E.K.K.A/Mega Knight, things get interesting.

You can actually use him on offence! He can actually kill them due to his insane damage, but you should not rely on this combo because this can be easily shut down by a lone Electro Wizard, which a lot of people use.

If desperate, he can even kill a Hog while only taking 3 to 4 hits! But I don’t recommend it because there are better options in this deck.

The key to making this super heavy deck work!

But beware, this card costs 6 elixirs, so follow these rules when you want to drop this card:

Rule number 3 can be broken in some cases, such as when your opponent has a much faster cycle, or when you want to bait out their heavy spell. It also messes up their gameplan, so it’s not a total waste.

And it’s ok if your opponent doesn’t give you time to drop one, I have won plenty of matches without dropping a single Elixir Collector!

Use it against gob Barrel, Minions, Minion Horde, etc.

Unlike Arrows, you can used this in various situations. For example, you can stun their troops/Inferno Tower to give you that precious edge! 0.5 second is longer than you think! Of course, you can also clear swarms with this.

Playing passively is the key here.

Your job right now would be to make positive Elixir trades.

Play lone Bandit to figure out the general type of deck your opponent is running, and to find out what your opponent would use to counter Giant + MK.

For example, let’s say you defended a Hog push with Ewiz and Bandit. Simply drop a Giant to form a strong push!

But don’t use MK to counter push because he is just too risky, and doing so will blow your surprise factor.

If you successfully figure out your opponent’s counters, try to think about how to counter the counter(pun intended).

If your opponent’s high DPS troop is P.E.K.K.A, then I would drop an Inferno Dragon instead of ewiz behind Giant+MK. If it is Inferno Dragon/Tower, try to get ewiz to lock onto them!

But only put these actions into reality once the timer hits the Double Elixir time.

You should be making positive trades, perfecting out your cycle, and generally preparing for the massive push that will end your opponent at this minute.

You can still put down pumps if you want to, until 1:30. As for the cycle, your preferred cycle would be something like this:

Don’t forget to bait out their counters!

You should also have done some minor damage to be ready if your push fails. When the timer hits 1:10, put a Giant at the back, the side you are defending.

Time to release the beasts!

After dropping a Giant, slowly put supports behind it. But make sure to be slow, because they might rush while you spent all of your Elixir on your push, or you could open a chance for a value spell.

After your push passes the bridge, drop everything!

You should have figured out their counters by now, so play accordingly to the situation.

If your push doesn’t take out the Tower, no worries! If their Tower HP is around 400, just defend and spell cycle.

If not, go into overtime and use all that positive Elixir trades you made early on!

If your opponent used a Miner and didn’t drop an Elixir Collector, there is a good chance that their counter will be Inferno Tower, which isn’t easy to take out.

Inferno Tower completely kills Giant, so you should not expect a crown before Double Elixir.

The defending part is easier. Use your Bandit to protect your Tower/Elixir Collector from their Miner, use Ewiz for Bandit, and you should be good.

When you hit Double Elixir, try to stack up troops so your ewiz won’t get distracted by anything.

Since they have to rely solely on Inferno Tower, Ewiz locked onto it is automatic three crown for you. But if they are really good at stalling your Ewiz, then you might have to play for a draw.

This one is a bit easier than the normal variant because of how Giant just ignores P.E.K.K.A and deals damage to Tower. Play it like the normal variant, except you will be relying on Inferno Dragon way more rather than Electro Wizard.

Siege: a piece of cake. You have 2 strong counters to siege; MK and Giant. Those cards are rather heavy, so be careful about when you place your Elixir Collector(you might not have the chance to use it at all!), and this will be an easy victory for you.

Even easier than siege!

As for offence, play similarly to Miner control(Inferno Tower).

If it is the MK variant, space out your troops so that he can’t eliminate all of your push in a swing.

Not too popular nowadays, those gals can be a threat to your push because you can’t directly kill them with a spell, and they pack so much DPS!

On defense though, it’s really easy. Mk on the 2 Musketeers, and use the rest on the other one.

This matchup isn’t too tough, try to get damage early on and you might even win!

Not too hard, half of your deck is a counter to Hog and they most likely won’t have a reliable tank killer in their deck, thus making your push unstoppable.

Use Ewiz for Hog, and Bandit for supports.

If they rush you, simply defend with a Bandit to create an Elixir advantage.

This one is probably the toughest out of all the matchups.

They would always have an advantage over you due to the amount of Golem’s health compared to Giant  And this deck can’t exactly rush either, so put Inferno Dragon/Pump up when they use their Golem.

Then their push crosses the bridge, drop MK on their support troops, and Inferno Dragon on the Golem.

Offence wouldn’t be too hard since Golem decks rarely use a high HP and DPS troop, so always try to do more damage than them.

If it goes to overtime(1-1) which is pretty common(so expect this situation and deal damage to both towers), go aggressive at the center, using MK, Bandit, Giant to full advantage.

It is ok to lose in this matchup.

Well, that’s pretty much it about this deck. This deck always gave me easy wins, and it is frequently used by rankers! I hope you get wins with this deck! Have a clashtastic day! [poll id=”68″]