Hey guys, it’s Exordium! Today I’ll be evaluating a new Legendary Arena Deck I’ve been experimenting with, featuring some of the Huts and the Lumberjack! 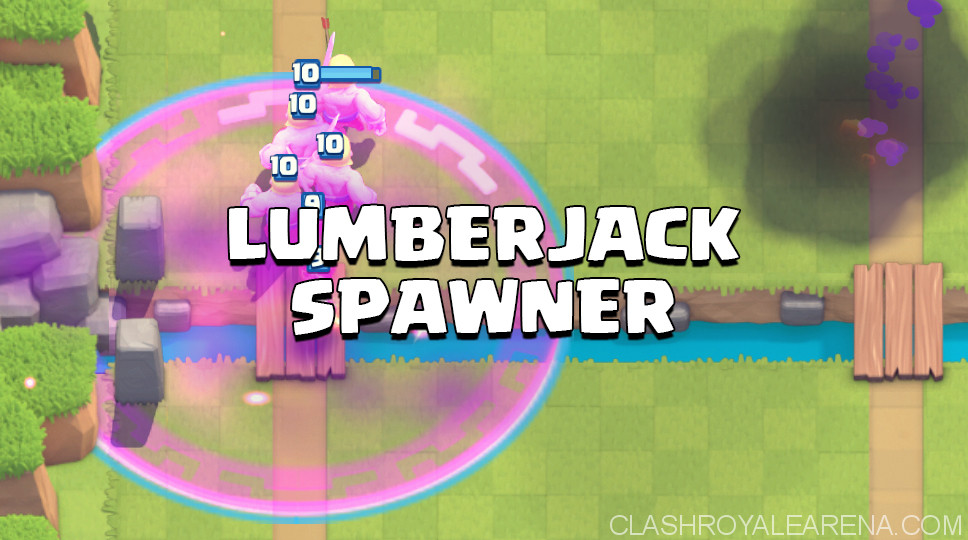 Playing this Deck can look easy but losses can be conceived if you are not following a particular (but sometimes irregular) rhythm.

I always start with my Huts. The Huts are great because they allow you to defend your base while still applying hard pressure to their Towers on that side, forcing them to occasionally play defensively. Then deploying LJ ahead will allow for your units to be enRaged and you can startle your opponent.

However, another obviously powerful strategy with this Deck is to spawn on one side very heavily, then use Lumberjack on the other side. This will disorientate your enemy, and force them to defend both lanes – you are bound to deal some damage.

How To Play – All Cards

Lumberjack – Discussed above. Also use him as a last minute Hog defense, as his hit speed can devastate medium HP units. He can counter Graveyard too, and larger tanks when synergized the Mega Minion.

Barbarian Hut – The Barbarian Hut usually goes down second, after the Furnace. Placing it slightly ahead of the Tower allows the Barbarians and the base building to continuously lure other Cards in, without the Tower being touched. It can also be used for clutch defenses due to its high HP.

Furnace – Never use the Furnace for defense, unless as a straight decoy at the end to mitigate huge amounts of damage, e.g. from a Sparky. The Furnace has a low spawn rate and does not boast the highest HP, so is better left in the back. You do not need an over levelled Furnace that can hit the Tower with every Spirit spawn, although this will give you an incredible advantage. It is simply used to keep chipping the enemy’s pushes and make sure there are no threats on that side.

Mega Minion – Mega Minion is a must have, due to it’s Elixir value. Use it to defend against large tanks, units such as the Valkyrie, and even paired with the LJ against Graveyard, Hog Rider and more. She is amazing at dealing with Goblin Barrel, and helps you avoid wasting other Cards that your enemy may intend to bait from your hand to gain huge advantages. Mega Minion can provide backup to the LJ, but I advise against this – his slow speed optimizes him for defensive manoeuvres. Please take a look at here to read more about the Mega Minion!


Lightning – Lightning is hard to master but very useful. Try to avoid using it to clear the path for the Lumberjack to a Tower if you set him down on the opposite lane you spawn on, due to the simple fact that he has low HP and there is little chance he will survive anyway. Use it for clutch wins but also to devastate support units coming to your Towers.
Related topic: Why you should use Lightning now!


Valkyrie – The Valk can be used with the Mega Minion and Lumberjack to defend against pretty much any large push. Stall your deployments as Lightning is now popular in the meta, but drop the Valkyrie first as she can tank better than the other Cards in the Deck. She can be used specifically to shut down Musketeer and Wizard support, and can even be used against fellow Valkyries paired with Cards such as the Ice Spirit, with the help of your Tower. Defensively, the Valkyrie is your anchor point.

Musketeer – The Musketeer is very powerful. Use it as a behind-Tower defensive option against Minions, Hordes and even Spirits. Teamed with the Ice Spirit, you can even shut down Hog, and heavier Prince and Giant pushes.

Ice Spirit – The Ice Spirit, again, synergies amazingly well with the Musketeer. Use them as above, or use the Ice Spirit to backup larger pushes where Valkyrie may be deployed. 1 Elixir for such amazing value cannot be missed! The Ice Spirit can shut down heavy Giant pushes with ease. One of my favorite moves is to slow the Royal Giant, allowing my heavier units like Mega Minion to deal lots of damage and mitigating up to 500 damage with a super small cost! Moves like these will leave you with the upper hand!

Hope you all enjoyed the guide, video should be out on this Deck very soon! Thanks for reading, I’m gonna be on the YouTube friends list soon so check me out! Good luck!