Hey everyone, it’s Inaros here (Frisk Dreemurr in the comments) with my first deck guide, a Battle Ram cycle deck!

Now, I know that you must be thinking that you’ll get a typical meta deck, but this baby is VERY off meta. This deck came to be when I won the Battle Ram from it’s challenge. I was so enthusiastic to use it that I just threw together the cards you’re about to see and jumped right in! The rest was history… jumping from Frozen Peak all the way to the old Legendary Arena (now known as Hog Mountain), then to the new Legendary Arena! Prepare yourselves, for things are about to get REALLY Frisky! 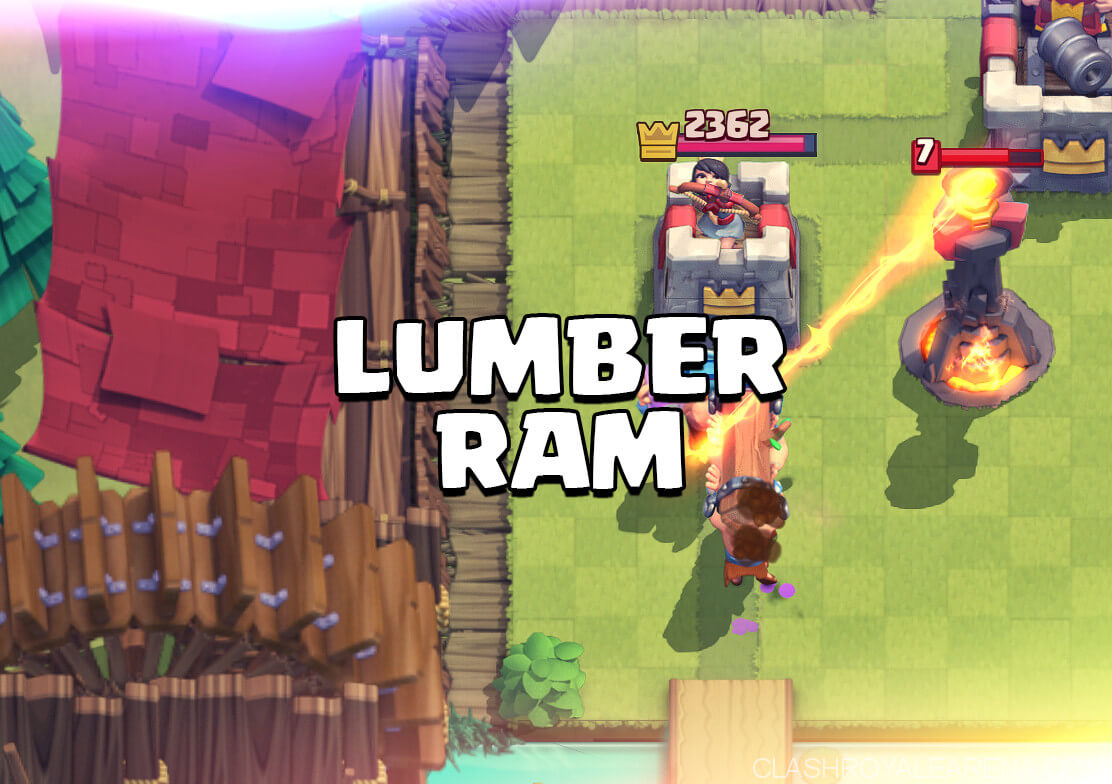 Bowler: This big blue (or purple?!) dude digs the simple things in life, and you’ll soon learn to dig him when you understand his true power in this deck!

The Bowler tosses a huge rock in a linear direction, hitting troops in it’s way for as long as the boulder lives.

He is a splash damage dealer against cards like Skarmy, but not against the likes of Minion Horde.

He also has the ability to knock back several non-tank cards, making him a life saver and a great push dissector (only exception is the dreaded Lavaloon, curse that push!!!!).

Battle Ram: Two Barbarians holding a large log, dealing significant damage if they connect it with a building. The fun doesn’t stop there, though…two Barbarians pop in to deal even more damage!

You’ll find that most of your pushes will be founded on this card, as you have several threat cards in this deck that an opponent with common sense will not let damage the tower.

Get creative with your ram combos, and remember to mix it up a bit so the opponent doesn’t know what to expect.

To see an extensive report on what this handsome devil can do, click here.

He’ll be an important figure in defense and push protection in this deck, and he’s a good cycle card when in a pinch.

Lumberjack: Chop chop! The Lumberjack is the best legendary in the game (of course in my opinion)!

For four elixir, you have an insanely fast, fast hitting speed, high damage dealer that can reduce a tower to about 20% of it’s HP!

As a bonus, a built in rage spell is dropped upon it’s death, making it a very great card when you just want a tower fast.

Elite Barbarians: These two muscle beaches are like regular Barbarians, only faster, tougher, and stronger!

Ice Spirit: This cute little ball of snow may look harmless, but will guaranteed be a life saver in many occasions!

It will freeze any opposing troop for roughly 1.5 seconds.

The best part? It’s almost always guaranteed to make it to the tower, giving you some free chip damage that your opponent won’t bother to pay attention too.

For a common and being 1 elixir, it’s pretty tanky.

Another cycle card in this deck.

Arrows: Not much to say. Clears swarms and helps out a lot against the pesky Minion Horde that wants to end your push.

The Log: I mean, do I even have to explain this one?! IT’S THE LOG!!! Let this guide do the explaining.

Arrows: None really except Fireball.

Start with a lone Lumberjack or Battle Ram at the bridge to bait any important Glass Cannons or swarms (support them if you’re feeling bold!). If neither are available, just wait until the opponent drops their tank/glass cannon in the back and drop your Bowler in the same lane.

Predictive Log/Arrows are key here, so wait at least two seconds after dropping your Battle Ram to ensure safe travels.

This is where you can get as aggressive as you like! This deck is extremely quick at cycling, so you don’t have to worry too much about defense (you’ll have a second or third Bowler if you cycle quickly; try to include Bowler in every push come Double Elixir time).

Build the most monstrous pushes you can imagine!

I’m talking E barbs+Lumberjack+Ice Golem+ Ram+ Ice Spirit, Bowler+Lumberjack+E-barbs+Ice Spirit, Ice Golem+E barbs+Ram+ Bowler, or even ALL the cards in this deck into ONE. GINORMOUS. PUSH!!!!

Lava Hound: To quote a certain robot from a sci-fi movie: “WE’RE DOOMED!!”

You have E barbs and Lumberjack to shred through the big stone dude, Battle Ram to apply pressure, and Bowler to mow down the supports. Use Ice Golem and Ice Spirit to stall or even kite Inferno Dragon/Mega Minion. Watch out for Lightning.

Use Bowler for the single Musketeer and support, Ice Golem and Lumberjack for double Musketeers. You should be able to out cycle them.

Bait: They’ll bow down to you if you use your Log/Arrows/Bowler correctly.

Hog Rider: Easiest matchup. Watch out for E barbs, Lightning, or E wiz. Use the tactic mentioned in the tips.

Siege: They’ll COMPLETELY bow down to you, as their defense is garbage. Just try not to get out cycled.

Try not, I repeat, TRY NOT to let their tank cross the bridge. You’ll have Lumberjack or E barbs to decimate it. You’ll need to save your Bowler a couple of times, though (see what I mean?), to deal with the skellies. Watch out for the Freeze Spell (though I haven’t seen it used with Graveyard in a while). Apply pressure so they have less time to use the Graveyard and even less to defend your push.

Well, this is it, the end of my first guide!

I guarantee you that you’ll have the game raining trophies, plus lots of fun with this deck! If it doesn’t turn out for you, then that’s OK. You can go back to the meta (ugh).