Hello fellow Clashers, I’m Macintosh and what I have today is a Giant Lumberjack deck with a twist which has given me breathing room for staying in Legendary Arena. Currently, my highest trophy count is 3258 but it has only been a few days since I got my hands on the Lumberjack and I believe I could push further if I put in the time. In last two tournaments I joined, I placed 2nd and 1st respectively, showing that this deck is very competitive and tough to go against especially in fair matchups. So without further ado, here is an overview of my deck: 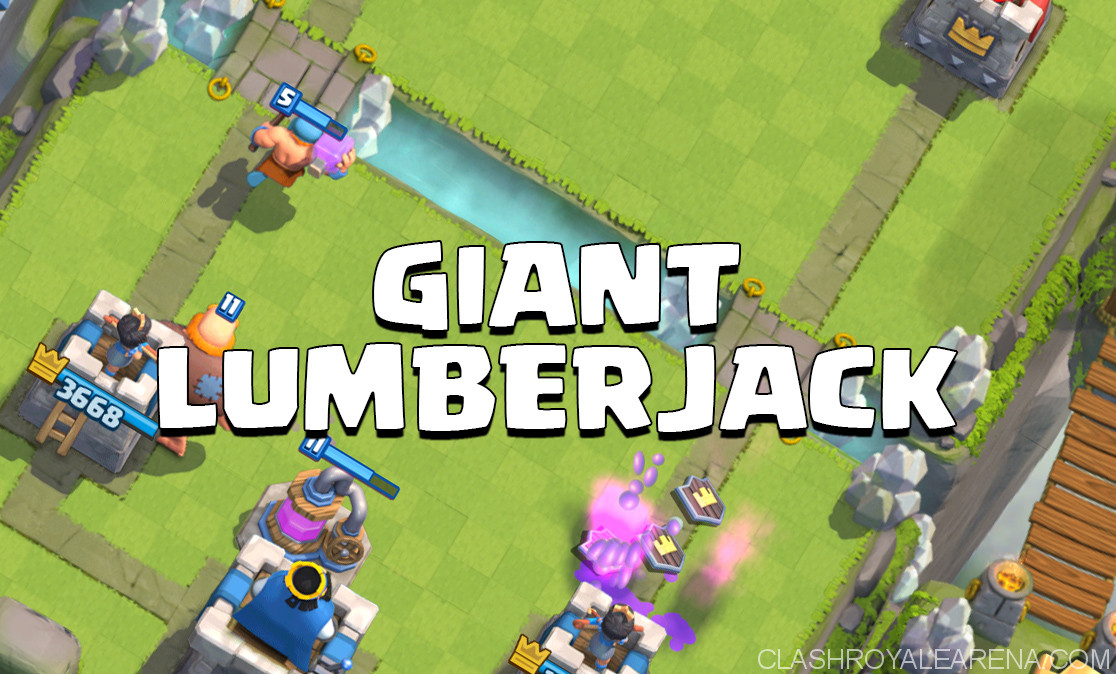 Giant Lumberjack Deck for Arena 8 and 9

Giant: Your tank and main win condition. Most of the towers I bring down is from the Giant beating on the tower with the dead Lumberjack’s rage, or with either Lumberjack or Goblins behind Giant. It is also used on defense when I have no counter in my hand to a threat such as lots of Fire Spirits which have accumulated from Furnace, distraction for P.E.K.K.A if my Goblins are Zapped or out of rotation, or to tank incoming damage so I could place DPS troops behind him. If it reaches the tower with a good amount of health, that tower is in trouble. Key is to not let it receive uncontested damage from defense such as Inferno Tower, Mini P.E.K.K.A, Lumberjack, Goblins, etc.

Lumberjack: The recently reworked Lumberjack is quite strong, perhaps OP. His attack speed on top of his DPS makes him kind of allows him to fill the role of a Mini P.E.K.K.A while not being hard countered by units like Goblins and Guards, while also having his unique rage-on-death ability on top. On defense, it is used to kill Hog rider, Giant, Royal Giant, and any threats that you need to shred. If you have an Elixir advantage and could put a Giant down before the Lumberjack is past the bridge, you can decide to do so if you have something to check his counterplay which could be Minions, a defensively used Giant of his own with incoming help units once he has the Elixir, defensive building + Goblins, etc. Once you start accumulating experience with using Lumberjack, the when or when to not counterpush becomes an easier decision to make. Sometimes with an Elixir advantage during the right situations, I would use Lumberjack with Goblins behind it while having a Giant pushing on the other side if he spends too much to counter my Giant. A Lumberjack bashing on a tower or Goblins bashing on a tower with him or with rage… that is a tower that probably won’t stand for long. With all this said, while Lumberjack is very strong atm, he is not without his flaws. He is less tankier than Mini P.E.K.K.A and Mini P.E.K.K.A’s higher damage per swing could be more useful in situation where the first hit is the difference maker. He also can get killed very easily if sent without much help leading a charge and can lead to costly Elixir deficiencies if not played correctly.

Goblins: 2 Elixir answer to miner, Mini P.E.K.K.A, Prince, solo Musk, and Hog. Pulls P.E.K.K.A and Giant Skeleton, and shreds high hp units such as Giant and Royal Giant. Countered by the common Zap, so you must be careful when using it as your only means of defense vs Hog and so forth. On offense, unless your starting hand doesn’t have Giant or Elixir Collector and you are sending them by themselves to cycle your deck, do not send them off on their own. Don’t always just mindlessly cycle at the beginning in those situations either. Look at your hand and see if that would leave you vulnerable to Hog or Royal Giant and so forth.

Musketeer: The good old Giant and Musketeer synergy. The Musketeer is a stud. He has always been effectively used as a card that could start off defending behind a turret to then being accompanied with other cards for a counterpush. This is your check against Balloon (sometimes need Ice Spirit), Sparky pushes with help of distraction or Giant, and your ONLY answer to Lava Hound decks. There are times where putting a Musketeer on a Lava Hound is actually the wrong move to make, as a Fireball and Zap to your only answer for an incoming Balloon can cheese you to a loss. My usual buildup for my push starts off with a Musketeer defending a push, then a Giant in front, followed by Lumberjack behind Giant to only speed up Giant around the bridge area, then Ice Spirit, and then either arrows/Log/Goblins depending on the opponent. You must be wary of spells such as Fireball and poison while playing this card, especially if you have an Elixir Collector on the field or you can end up with a terrible, terrible Elixir disadvantage.

Ice Spirit: Another card that I think is very strong atm. For one Elixir, it can help make your push by freezing the opponent’s counter before he can do his job or on defensive vs Hog, Mini P.E.K.K.A, Royal Giant, lone Musketeer or ice wizard, Goblins….you get the point. Another important purpose it serves is to help you defeat Sparky. Sometimes you need to restart his buildup and this one Elixir card can do that job for you. Or freeze it which is even better. Be careful when using him with a unit that can face a spell such as Goblins vs The Log or Musketeer vs Fireball because that means you will lose one extra Elixir if he fishes it out like that. Also sometimes necessary vs Balloon Giant or Balloon Lava Hound combos. In that case, try to freeze both units.

Arrows: A card everyone is accustomed to by now. It counters Minions, Minion Horde, lava pups, Goblins barrel (be careful for this), and princess. Because your only defense vs air troops is pretty much Musketeer, you need to really use this card wisely. In situations when Musketeer is not available, you might need to use it vs Minions with this deck. Just make sure your opponent doesn’t have a Minion Horde coming your way. Don’t snipe princess with it unless you don’t have Log or it is out of The Logs reach, or you can hit collector plus princess.

The Log: Labeled by haters as the worst legendary, I beg to differ. With princesses running rampant past arena 7, it is an automatic plus one Elixir advantage. It can destroy Hog+ Goblins/Fire Spirits with the help of Goblins, Lumberjack, or Ice Spirit, knockback incoming ground units to give you time to counter, or cut off slow pushes. Recently, there was a post on reddit how The Log should be used as a defensive card. I personally believe that The Log can be a high risk offensive card that can destroy opponents with the right timing. If I know that the opponent is going to use Fire Spirits/Ice Spirit/Goblin to try and cut off my Giant support, I can preemptively use The Log and leave him to have an inefficient plan B. It can even sweep up barbarians with Ice Spirit and Giant’s backup units. In some cases, princess + collector can be hit with The Log so use it over arrow in that case.

Elixir Collector: Seeing this in your starting hand is a happy sight. This helps you fund your expensive slow push. This scouts out spells such as Fireball, poison, lightning, and rocket. If a miner is coming, have Ice Spirit or Goblins ready. I always place my first one right above the king tower to see if they use miner. If they don’t have one, placement depends on the deck they use. Do not get too pump happy because sometimes you need to be aggressive with Elixir advantages while the opponent is weak.

In the beginning of the game I either place Elixir Collector if I have one, Giant at King Tower if I don’t have one, cycle with Ice Spirit and/or Goblins if I don’t have either, or not play any cards and wait for the opponent’s first move if my starting hand gives me nothing to work with. If they play aggressive right from the start, defend first and use the Elixir lead to build up a strong push. Also, if you place Collector and they use that time to push hard and take a big chunk of your tower HP, don’t panic and get ready to use your Elixir lead for your counterpush.

There are many tournament games I started off by taking 1000 damage or more and then countering with more damage and controlling the tempo from that point on. Sometimes, my counterpush even results in the opponent’s crown tower falling. If the opponent starts a Giant push, I usually play my own Giant on the same side and try to best his push with my support units. I feel that trying to push on a different side leaves me vulnerable to a snowball push such as Sparky or witch that will outpace your push. Bowler decks which have gotten popular thrive on your mistake. You should tank it with Giant with a placement that doesn’t hit your back line. Ice spirit if it can get to the bowler might actually be harmful if Lumberjack or Goblins would actually get focused after he resets. So just make sure the freeze is enough time to kill the bowler, the focus will still be on the Giant, or just wait to use the spirit until the bowler is dead. If his backline won’t decimate your Goblins, you can also surround him so your tower and/or your other units can kill the bowler.

Lastly, 3 Musketeers which could cause some struggles need smart use of Elixir to manage. Depending on your hand, there are many ways to try and come up on top vs a 3 Musk push. Giant is most likely necessary to soak damage while you figure out how to deal with front line whether it be Giant P.E.K.K.A or Golem. Ice spirit should be used on the single Musk of the split unless you have a plan for how to turn the tide on the other side with it. Don’t preemptively use Log and waste Elixir and you should be able to make it a matter of skill rather than matchup.

I got The Log as my first legendary in the beginning of September and then Lumberjack a few days later and came up with this deck. Because of how much success I’ve had after only a few days of playing with this deck, I believe it is a decently easy to use deck that punishes overcommitting opponent’s and decks with high Elixir costs. If you have both of these legendaries, give this deck a try and see if you can find more success than I did. 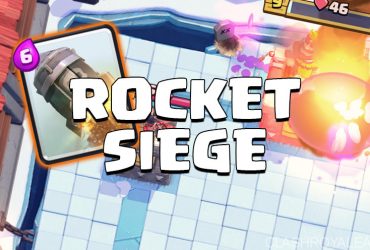 Hello Clashers! This is KairosTime with a complete guide on how to play Rocket Siege from beginning to end! I’ve been playing around with Rocket decks for awhile now, and … 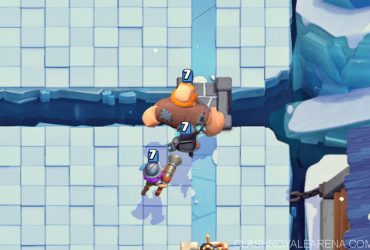 Hey y’all! Hope you’re doing well! It’s the Loser and the Cow here, bringing you guys a new series called “F2P Friendlies”. Today, I, Ultimate, will be sharing part one, …