Hey guys! M4SON back today to review the heavy counter pushing deck called the 4 Horsemen deck revolving around Prince, Dark Prince, Mini P.E.K.K.A and the newly improved Lumberjack! Essentially you could compare this to the popular PPPP (P.E.K.K.A, Dark Prince, Prince, Princess). I view it as a cheaper version that offers a lot more versatility while not having to invest in a 7 Elixir P.E.K.K.A . This deck is super fun to play and a very hard to stop combo if you are not prepared for it, but also really hard to stop because of how strong the counter push will be. Anyway lets hop into the deck list! 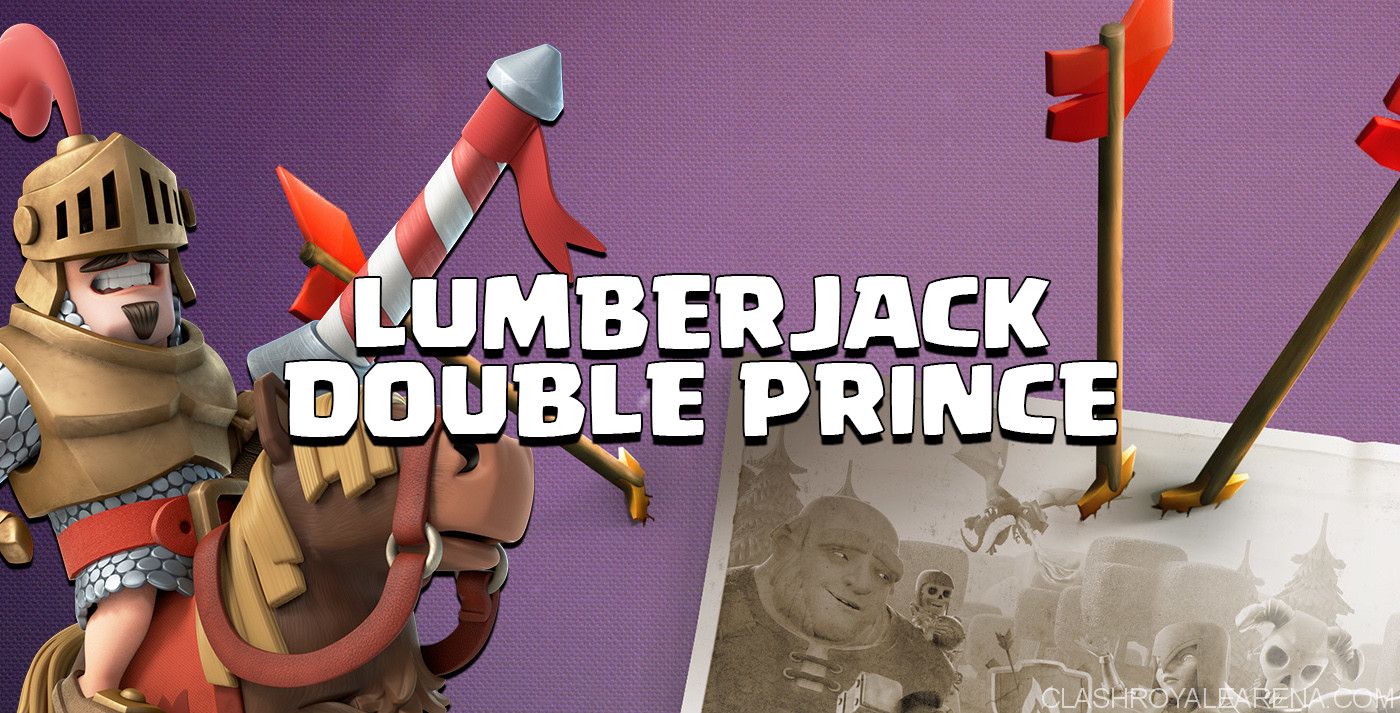 Ice Spirit: Once again with many of my other new decks, Ice Spirit offers insane versatility. For just 1 Elixir you’re able to cycle your deck and Freeze for 2 seconds. This card can be a beast on defense BUT can also accompany many pushes and be even stronger on offense. The beauty of this card is really the 1 Elixir, and with such a heavy push involving the Princes, and Mini P.E.K.K.A and Lumberjack it’s a great addition to help out. Also on defense a Ice Spirit + Mini P.E.K.K.A / Prince / Lumberjack will be able to defend against many troops while also having a lot of HP left to set up the counter push.

Fire Spirit / Princess: Fire spirits will be the poor mans Princess in this deck. If you have Princess set her up in the back to assist the deadly pushes. If you don’t you can use Fire Spirits behind the pushes but definitely be more careful of troop placement because you don’t want to give your enemy a value Zap that resets the prince charges while also killing your Fire Spirits.

Zap: Even after the nerf, still the most versatile spell in the game. Definitely will still need it to reset Sparky and Inferno Towers.  Additionally a Zap + Ice Spirits will also be able to take out Minions / Horde.

Mini P.E.K.K.A: The first of the four horsemen. Use Mini P.E.K.K.A to defend your pumps against Miners, or any large single troop like Giant. Due to Mini P.E.K.K.A’s huge damage, she will mostly stay alive after the fight and become the counter push. Generally Mini P.E.K.K.A will be at the back of the pushes.

Elixir Collector: With any expensive deck you will need to run the elixir collectors. With popular decks that use Miners and spells, you have to position your collectors correctly to make sure you can keep your collectors alive. The great thing about this deck is any of the 4 horsemen are able to protect your collectors from Miners and then become a counter push.

Dark Prince: The second of the four horsemen. Dark Prince is a great card to assist all these single target units. Generally he will go behind the Lumberjack clearing out the cheap troops used to distract Princes / Mini P.E.K.K.A. But besides at taking out cheap troops the Dark Prince is also great at taking out barbarians or even trading with your opponent Mini P.E.K.K.A if the fight is on your side of the field.

Prince: The third of the four horsemen. Prince offers insane single target DPS. You generally want him in the back of your pushes, allowing the Lumberjack and Dark Prince to tank for him. I generally like to have plop him behind my king tower to get his charge going, then drop Lumberjack or Dark Prince in front or even both depending on my elixir. Prince offers similar roles to Mini P.E.K.K.A in this deck so not much else to say about this powerful card.

Starting off with any deck that uses Elixir Pump you want to get your pumps down. I generally like putting them in the back corners because you can easily predict the Miner position. If the enemy runs Miner just protect your pumps with any of the four horsemen. After you protect it send a counter push while you have the elixir advantage. Essentially you just want to have as many pumps down as possible just as double elixir hits because that’s when the deck really shines.

The deck revolves around defending with your four horsemen then just counter pushing with them. Don’t go too aggressive at the start, what you want to do is play conservatively defending and setting up pumps. WHILE also analyzing and studying your opponents cards. You want to figure out if they are using Inferno Towers, Minions / Horde, etc. Just typical things that counter your deck. Once you figure out how your opponent is going to defend, you then counter attack full force when it hits Double Elixir. This is where Fire Spirits come in if you don’t have Princess. If they are running Minions or Horde you have to time it so the Fire Spirits will clear out the horde and leave your horsemen’s barely scratched. This is why I say Fire Spirits are the poor mans Princess due to the fact that they take more skill and precise timing.

But once you get everything rolling into Double Elixr and the enemy doesn’t want to attack first. Just drop Prince in the back to get his charge going. Then drop Lumberjack first then Dark Prince behind to have a really strong push. Accompany it with an Ice Spirit while Princess or Fire Spirits come in from the back to assist. Mini P.E.K.KA will occasionally join the pushes if it fits in the counter push or if the match up calls for it. There are also other cool mini pushes you can do such as Mini P.E.K.K.A, Dark Prince and Ice Spirit. Or Lumberjack, Mini P.E.K.K.A, and Ice Spirit. Or even the old classic Dark Prince, Prince, and Ice Spirit. As you can see this deck is very versatile and can output insane damage, with these beastly cards all under a rage it can catch your opponent off guard.

All credits go to MarauderV8 as he is the first one sharing this deck. Thanks for reading, hope you have found this Lumberjack Double Prince Deck helpful! Experiment around and enjoy guys! M4SON out!