This is PSYCH0++ from Turkey, 39 years old, from clan The Sahabes. I am addicted to this awesome game like many others.

This game is full of strategy, timing and concentration. I used to be a good chess player in the past but now I’m happy to be a considerably good player in this game.

I have been struggling in Legendary Arena and Challenger I between 3800-4050 throphy. I was losing and winning but could not make my way to challenger II until I have changed just one card in my deck: Poison instead of Lightning!

Now I have 4320 trophy and I can make more progress. 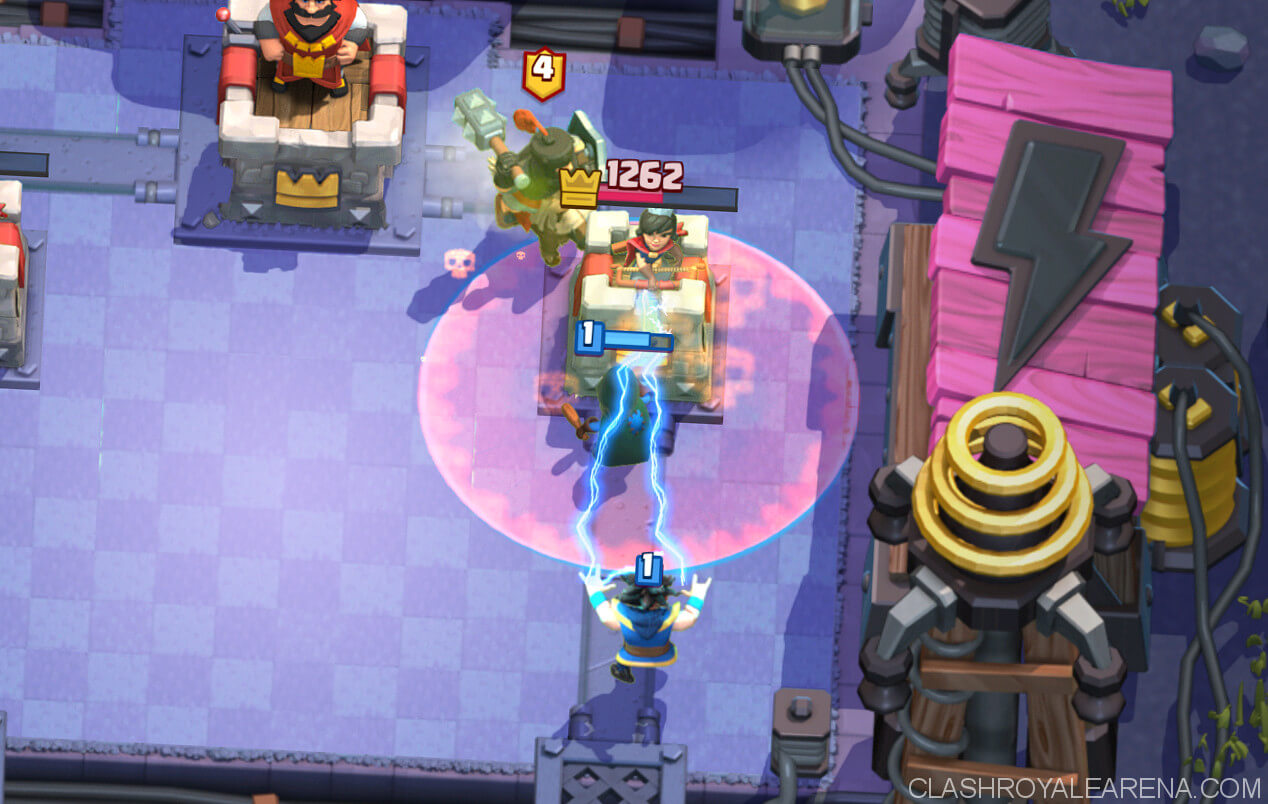 Why do I choose Poison over Lightning

I was using lightning for a long time in my old deck:

However I realized that I struggled a lot to cycle my deck after each time using Lightning in the games (even in a very efective way).

Lightning is very good card and lots of fun to use.

I have level 7 Lightning and I could crash Wizard, Witch completely and leave Executioners with very small hitpoints with this level and sometimes waste a few of them together. It also damages Princess Tower 388 in ladder matches if its used around the Tower (which is close to rockets damage).

However my deck used to have 4.1 average Elixir with Lightning and it was not easy to cycle it by using Lightning; 6 elixirs.

I have lost many games against fast control and medium control decks because of lack of cycling my cards.

You have to use Lightning in single troops such as Wizards, Executioner, Witch but should not use over swarm cards such as Gobling Gang, Minion Horde because of negative Elixir trade.

I have Fire Spirits to destroy Minion Horde as a good air defense but when I dont have them in cycle or my Tesla Tower in defense then I was helpless, stuck against air attacks or swarm attacks.

Also in attacks there were not many combination without killing swarm units.

I was aware of this issue and found a great solution and gave up Lightning card and started using Poison. Now average Elixir of this deck is 3.9.

My Poison is also level 7 and in the ladder matches it is even stronger than level 10 Fireball when used over towers or troops.

Now I am able to use Poison over swarm cards such as Skeleton Army, Gang, Minion Horde and so many others.

I have realized that Poison is more effective and versatile than Lightning:

With a decent level of Bandit you can even deal with an Executioner!

Wizard, E wiz, Ice wiz or Princess they are all welcome to my Bandit

As a tricky well-calculated move I use my Bandit to kill Wizards or Executioner who are behind the beatdown decks. Bandit kills Executioner easily when Executioner is locked to another troop.

In offense its effective with help of Fire Spirits behind.

In offense its strong with its shield and splash power.

Sometimes use it in split push together with Bandit.

Locate your E.wiz other side of Tesla Tower as he can target Golem and Giant and will be safer for a long time.

E wiz is also your key card in offense when opponent has a Inferno Tower or Dragon!

Protect it from Minion Hordes or fire machine if necessary by using Fire Spirits or gobling Gang in front of the Tesla Tower.

With decent level of Fire Spirits you can even destroy an Electro wiz.

Use the Gang in the middle of your side to avoid Log when you defending. Distracting Inferno Dragon or Minion Hordes if you dont have Fire Spirits in hand or Poison.

Poison swarm units in offence to clear out the attack corridor.

If you don’t have Goblin Gang or Fire Spirits in hand then don’t start until your opponent starts.

If you have them then play splitting Goblin Gang or Fire Spirits behind your main Tower. You don’t have to wait until your opponent starts!

Then put Bandit or Prince just before less part of split units reaches then see how they counter. Then your opponent has to defend Bandit or Prince one side and they might forget about defending 3 gangs and you can give a cheap damage.

Don’t never use your Mega Knight unless your opponent sends strong troops with support units such as Elite Barbarians etc.

Don’t over push without seing your opponents all cards.

If you once give Elixir advantage to your opponent it could be difficult to attack & win you will rather have to defend in whole game not to lose.

Don’t forget that you are so strong in split push with this deck; whenever your opponent pushes from one side with a slow heavy tank then you can be effective from other side faster.

Against Giant & two Prince, do not push other side of Giant with a big push otherwise your opponent can go for your main Tower after destroying Princess Tower.

Defend Giant or Golem with Tesla and E.wiz and gangs and even Prince/Bandit then counter with a split push.

Against beatdown decks, defend and then fast counter from other lane with your Bandit or black Prince.

If your opponent puts all his power one side behind his Golem or Giant then you will win by pushing from other lane with all your power.

Against Hog cycle hands, reserve your Tesla for the Hog.

Against fast cycle decks, defend well until Double Elixir time, then in last minute you can use Mega Knight from one side and push from other side by using Bandit and Prince and Fire Spirits.

Don’t be scared to take some damage with Goblin Barrel or smilar attack in last minute as you have Mega Knight in one side and Prince + Bandit + Fire Spirits on the other side if your opponent does not have a good tank killer then they are not able to defend all your attack even with an Inferno Tower.

New meta P.E.K.K.A, Hut, Ghost, Miner deck could be very difficult but use your Poison on Hut+Princess Tower, keep the Tesla for P.E.K.K.A and support with Gang or e.wiz. Use Gang or Fire Spirits against Miner. Use Prince against ghost and it can go for one hit to Princess Tower after killing ghost. Against this deck you slowly win by using Poison and some cheap damages by using Gang at the end.