What’s up, Corrosive Logic here with another guide, How to reach Arena 7 as a level 1 player.

So first of all I just want to quickly say that I’m definitely not the first to do this. Lots of players find themselves getting bored with their main account so they decide to set out on an adventure, or maybe they just want to challenge themselves.

You might be one of those players, so why not create a new lvl 1 account and see how far you can get? 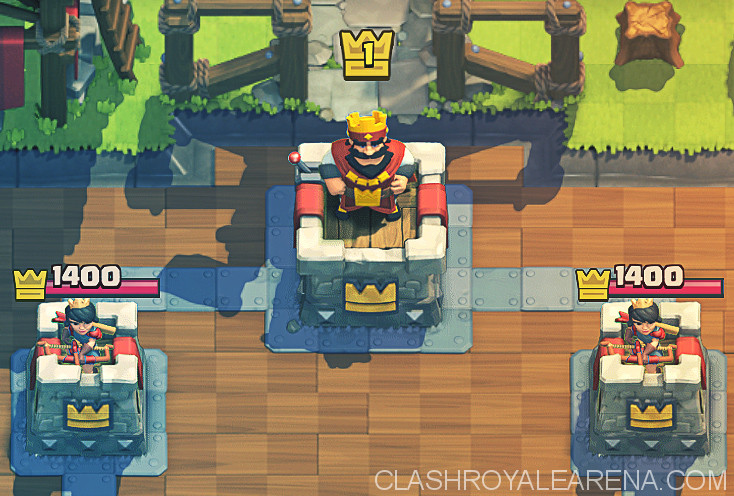 Getting to 1700 as a lvl 1 is definitely not the easiest thing in the world, but also not the hardest. The highest Lvl 1 that I know of has reached just over 2300 trophies, I’m not sure if anyone has ever gotten higher, and I’m pretty sure that that player used some money for chests in order to get some Legendaries.

I can’t tell you 100% step by step how to do it, as there are lots of different decks you can use, but I can definitely give you some guidelines and tips.

If you’ve given any thought to the subject, you have probably already established the obvious, you need Epics and/or Legendaries if you want to get high.

The reason for this is simple. I’m currently at about 1900 trophies with my Lvl 1 Account, and the average player I meet will be a lvl 8, with lvl 1 Leggies, lvl 2-3 Epics, lvl 5-6 Rares, and lvl 7-8 Commons. As a lvl 1, all of your cards are going to be lvl 1, so the closest card levels you will have with your opponent will be your Epic and Legendary cards.

Think about it, when I use my lvl 1 Arrows against a lvl 8 Minion Horde, my Crown Tower will still need 2 shots on each minion to kill them… I guess that scenario pretty much sums it all up.

Below I will show you the deck that I used and talk about it a little about it, but since the deck you’re going to use is probably going to be different I will focus on some other, more important topics:

Here is the deck that I used when I was at 1700 exactly, yet I often changed this deck around.

However when I reached 1800 I had to make lots of changes to my deck in order to gain more trophies.

First of all, at this point my Valkyrie was just too weak and it dying to Goblins, so I had to replace it with Fireball. Then I got the Balloon so sometimes I played with Balloon instead of Goblin Barrel but this varied. I also got the Inferno Dragon, so I replaced Tombstone with it in order to kill tanks. Occasionally I would play Lightning instead of Fireball but if you played someone with both Skeleton Army and Minion Horde there was no way you could win.

What buildings should I use?

There’s only 2 viable buildings, Inferno Tower and Tombstone. A lot of players like using the Inferno because with enough time even a lvl 1 Inferno charged up can kill any tank. Tombstone is what I used, the Skeleton damage didn’t do anything but I only used the Skeletons to distract my opponent. All other buildings are just useless at lvl 1. Currently I have the inferno dragon so I don’t even use a building.

Good Epics and Bad Epics to Use

Splash, Splash, Splash. Down here, almost EVERYONE has Skeleton Army and/or Minion Horde in their deck. Because of this, you need some epics that can deal splash damage.

In my case, I had the Baby Dragon and the Witch. So when you are making your deck try your best to have 2 splash cards at the very least.

Epics you shouldn’t use include:

Playstyle as an underleveled player

First of all, never rush your opponent until you’ve established a secure elixir advantage. You need all the Elixir possible to defend against your opponent, remember your tower only has 1400 HP and the damage coming from it is very low, not to mention that your opponents troops are going to be much stronger.

I’ve often tried rushing my opponent at the start of the game with for example Prince+Goblin Barrel. I manage to do a good amount of damage on their crown tower but now they can come back with a massive push and I don’t have nearly enough elixir to defend.

So because of this, almost all of your pushes must come from defending. That is the only way you are going to be able to beat lvl 8’s and 9’s. However, if you have already defended multiple times and you are now at an elixir advantage then it is okay to do a quick push at the top.

Guys I’ve said this multiple times already, but literally everyone has Skeleton Army down here. Because of this, you must always have Arrows ready to counter them. Skeleton Army will counter practically all of your pushes, so sometimes the only way to win a game is to prediction arrow their Skeleton Army.

So basically, you have to play more cautiously than ever down here. Normally you can probably just leave archers on your tower and suffer maybe 400 damage, but as a lvl 1 you can’t afford to do that, you have to literally counter everything they throw at you in order to preserve your tower health. It is impossible to play perfect defense, your opponent’s troops are going to overpowered so they will always be able to do some damage.

Offensively, you’ve got to understand that your deck won’t have great combos. Normally, there’s no way you can make a good deck that has cards that synergies with 6 Epics in your deck. However, because of the lvl 1 situation, you have to use Epics so your deck has to have extremely functional cards on an individual level. You will notice that you will have to use almost all your cards both defensively and offensively. So your main pushes are just going to involve placing the high HP card in front and the splash damage cards behind it, there is nothing else to it.

Here are some of the deck I used: 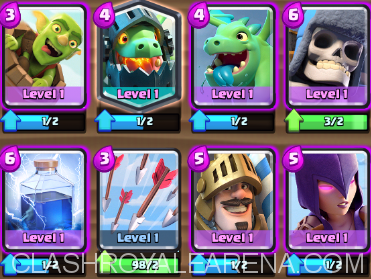 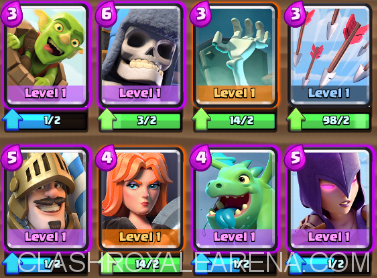 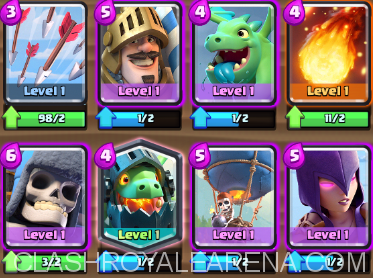 My Experience During my LvL 1 Journey

From 0-1500 it was fun. You could beat players because you were more skillful, and plus the lower you are the more viable lvl 1 Commons and Rares are.

But then I reached 1600 and that’s when the tilting started. Every game was very hard fought to win, it was just extremely frustrating when someone can use Skeleton Army on one side, then Mirror it on the other side. I can only Arrows one of them so all they need to do is rage the other side and I can do nothing about it. So at this moment in time I will honestly admit that I am not enjoying it, but that is mainly when I lose. I relish every game I win because of how tough the challenge is.

So now that you’ve read my guide, it’s YOUR turn to go out there and challenge yourself… on a lvl 1 account!

A few weeks ago I made a guide with tips and advice for players playing on a LvL 1 account (the Part I above). At that moment I had reached 1900 trophies as a LvL 1. However, I changed my deck up a little bit and I managed to reach arena 7 with it!

There’s been quite a few players at 2k trophies as a lvl 1, but I managed to do it with a deck that has only 1 Legendary, and I honestly really like this deck which is why I’m sharing it with you today! Also I have a video below with gameplay of the deck and commentary on how to play it!

This deck isn’t just for lvl 1’s, it can work very well at any level up to Arena 9!!

I have called it “The Epic Deck”, because it contains 5 Epics! Obviously as a Level 1 it’s going to be a lot harder to play with Commons or Rares, which is why I only included 2 in this deck.

First of all, before you complain about having no Legendaries, let me tell you what replacements you could have in this deck.

Now as a level 1, I have to be extremely cautious and play lots of defense in order to translate defense into offense. However, if you are a higher level it is still always good to defend well and conjure big counter pushes that can’t be stopped!

Ideally, what you want to do with this deck is to use some high power cards/pushes, then kill their counter to your push with your spells. Skeleton Army is such a Common card at these arenas, which is able to counter all of your pushes. That is why you MUST have Zap ready at ALL times. If you have a big push going, zapping their Skeleton Army just as it spawns often means good game. If they have Minion Horde then you will need to prediction Fireball it to take down their crown tower!

The Goblin Barrel is so useful in this deck, for the most part you should play it when you have other troops tanking for it.

Playing defense with this deck can be tricky, as you don’t have small distracting troops. If you are playing someone with a tank e.g. Golem/Giant, then you have to save your Inferno Dragon for it, every time. This deck has no buildings, so every defense should convert into offense if you have enough elixir.

Overall, the basic way to play defense is to find out what your opponent’s offense is, then use your cards to counter accordingly.

For example, when playing a bait deck with Skeleton Army/Goblin Barrel/Minion Horde, then you obviously have to keep the Baby Dragon, Witch and Fireball for defense.

Against a massive push coming towards you, use the Giant Skeleton’s bomb to kill them. I found this to be extremely useful against Sparky decks. Giant Skeleton is also good enough to counter prince pushes, because of its high HP.

Finally, I would like to mention playing against Hog decks.  Pre 2000 trophies I’ve yet to see a half decent Hog player, but playing without a buildings means that your opponent will always be able to get hits with it. I would suggest using the Inferno Dragon, which still means the Hog will get 2 shots. In my opinion you can possibly trade the Inferno Dragon for a building in this deck, but as a LvL 1 that’s obviously not possible so I never tried it.

Thank you for reading my guide, since I put so much effort and time into them I would really appreciate it if you could watch my video and subscribe to my channel as your support would encourage me to write more guides!