Are you looking for an easy-to-use Royal Giant Deck which works well in the current meta?

This deck was shared by Joe. It works well against Lavaloon, Zap-bait, Royal Giant, Hog Cycle and so many other deck types, helping him push from 2600+ to 3158 trophies.

*Note, these legendaries are very unique and can change the game if replaced

Miner – This guy is part of the, as I like to call it, Legendary Trifecta. It’s one of the cards everyone dreams of getting when they play this game. It is because he is a very unique card, that digs underground. But the main reason is because he is a tank that only costs 3 Elixir and can do lots of damage if left alone. He is also a very good duo with the Royal Giant because often your opponent will only have 1 or 2 counters for a tank.

Princess – This is the second card in my Legendary Trifecta. She is a goddess with incredible range that can punish the enemies greatly. In this deck, she is great when you put her behind the Royal Giant. She can kill counters like Skeleton Army, Minions, etc instantly.

Ice Spirit – This card is a great bang for the buck costing only 1 Elixir. It can really save you the game or win you the game. As you all now, it Freezes its range of 2.5 for 1.5 seconds, which is just a really great option for freezing heavy tanks for your Inferno Tower or chipping Minions or Goblins. He can also bait out a Zap.

The Log – This card is the third card of the Legendary Trifecta. Once most people have it, they have a hard time letting it go. It’s just a great card to take out large masses of low hp cards and also has the knock-back which is always nice. This card has also been in the debate of whether it’s better than the Zap or not, which is better to use, etc. Well, now with the Zap nerf, I think it is a pretty easy choice given that it can take out Goblin Barrels and the Zap can’t (same level comparison) The only defect to The log is it can’t reset Inferno Towers, but that shouldn’t be a huge deal with this deck. Take a look at here to read more about The Log!

Fire Spirits – Like the Ice Spirit, these guys are a great bang for the buck and can do massive amounts of damaged. I like to add these guys in because we don’t have the Zap for Minions etc. I always prioritize these guys against air cards. They are also good against Goblin Barrel. And lastly, they can bait out a Zap for your Inferno, Ice Spirit, or Skeleton Army.

Skeleton Army – I’ve included these guys because they are only 3 Elixir and can really save you the game. The are a greater counter against ground tanks and also a good distraction. Especially if you bait out a Zap, it can really give you an Elixir advantage.

Inferno Tower – Not much explaining to do with this guy, it can take out Lava Hounds, Royal Giants, and any other tank, almost instantly, which is always a nice little addition. It’s also a great counter against Hog decks.

This deck is a heavy offensive control deck, if you don’t keep control you’ll lose. And what I mean by this is, if you let them get to big of a push going, it can be very hard to defend. But once you have control, they can’t do anything and that’s what makes this deck so fun.

Here it really is based on your starting hand whether you want to go first or not (Refer to the best starting hands below).

If you get a good starting hand, I usually like to place the Royal Giant at the back and get a push starting.

In this first 30 seconds, you really just want to be scouting out his stuff and not play too aggressive.

Remember though, this all depends on game sense and understanding, never play this game like a robot.

By now you should have at least a rough understanding of your opponents deck, should know when to attack and when not to.

Double Elixir is known as the clutch round. Many players can make huge comebacks if you make any little mistakes.

You always want to make sure you are playing smart and aware of what your opponent can do.

Zap Bait – If you know you’re up against a Zap bait, play aggressive. Conserve either your Log, Fire Spirits, or Ice Spirit for whenever he throws that Goblin Barrel. Try to continue to cycle and drain his Elixir and take control. If you maintain control then Zap bait decks are the easiest to defend against.

LavaLoon – They will most likely start the Lava Hound in the back, if so, I always like to counter attack on the other lane so they are forced to defend and can’t get the Elixir to get the balloon. Also make sure you have your Inferno Tower and a support ready (princess or Fire Spirits) if you don’t, it can cost you the game. With Lavaloon I always like to try and get 2 crowns because double Elixir can really take a toll, and they will most likely get at least 1 tower. So if you get a good push and get a tower, start to really push for that second crown.

Sparky Decks – They are not impossible to counter with this deck, but it’s hard to beat a Sparky without a Zap and we all know that. I always try make quick cycles to force them to not use the Sparky, but if they do get the Sparky down, then try to have your cheap cards ready to waste its charge. If you can’t get a tower, and you’re just using all you have to defend, then just do your best to draw. Fortunately not many people use the Sparky, but you get every once and a while.

Graveyard decks – The deck of no skill is counter-able with this deck. Try to bait their Zap if they have one because you are going to need to use your Skeleton Army to defend it, also have your Fire Spirits or Log ready in case they Freeze it or something. The Graveyard is such an op card in my opinion that it is hard to counter.

This deck has gotten me several wins in tournament level against guys who are at 3700+.

Although I will admit, I’m ‘only’ at 3158 right now, I’m still climbing easily. I feel like I should post this now because the deck is just working great.

If you are still reading to this point, I know that you are really looking for a deck that is going to be consistent and is going to get you to where you want to be, because it has gotten there for me.

This is also my first deck that I’m submitting so if you have any questions or comments feel free to leave them below, and I’ll try to answer them! 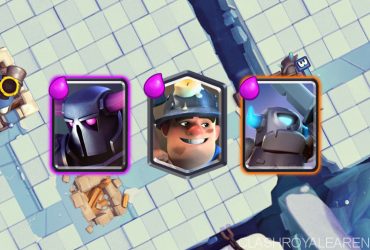 Hey guys, KairosTime here with a powerful double P.E.K.K.A deck that has proven to win the 12th round of a grand challenge! This deck is fantastic at putting constant pressure … 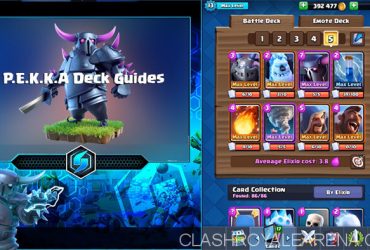 Hello everyone, as this is my first deck guide, I’ll give you a little back story on it first. I have been using the same deck since arena 8 and …