Hey, guys! It’s DownWithTheRG with the ultimate guide to LavaLoon. I decided to make this guide due to the recent rise in popularity of Hound-loon decks.

So without further ado, let’s dive right into it. (At the end of the guide I’ll do a quick guide on the most popular Hound-Loon deck right now, the LavaLoon Lightning, so stay tuned!) 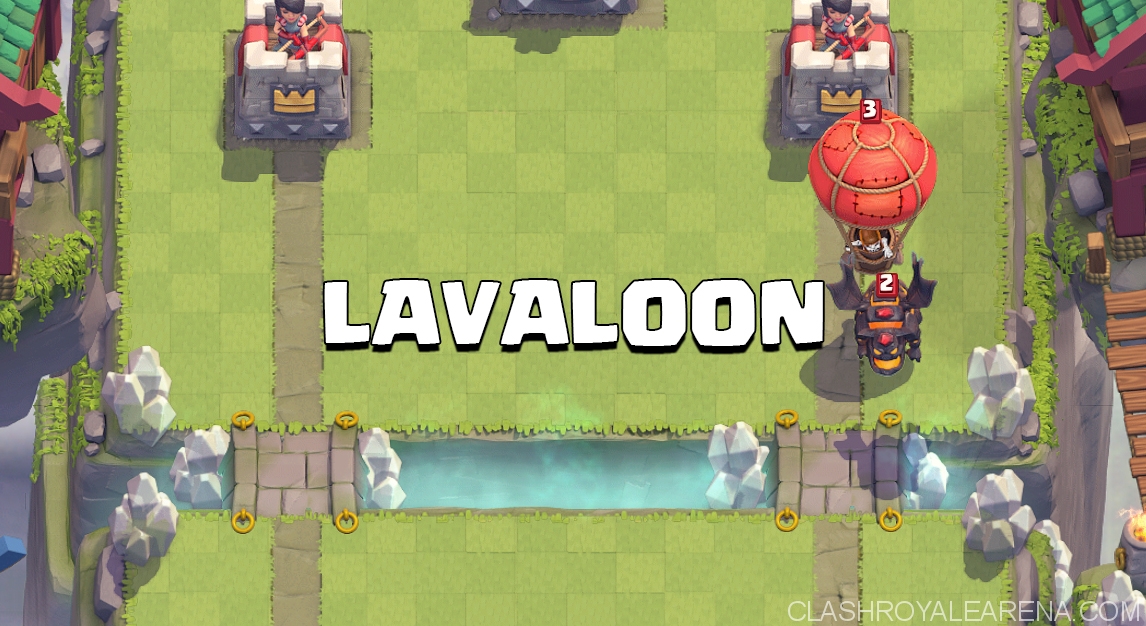 How to Play LavaLoon The Right Way!

What type of archetype does LavaLoon fall under?

Although there are a few exceptions, most LavaLoon decks fall under the Beatdown archetype.

What is an archetype?

An archetype is basically the form of your playstyle, and there are different forms of archetypes, such as Siege, which involves X-Bow, Mortar and basically any deck where the win condition has a long range and usually whittles down the tower from afar.

Another type of archetype is Cycle, where the playstyle involves well, cycling your cards, getting chip damage on your opponent’s tower and not letting your opponent build a huge push.

I list a few archetypes here to give you a basic idea of what an archetype is, but if you want a complete guide on deck archetypes, click here.

With that aside, let’s take a look at why LavaLoon is a beatdown deck.

For a deck to be beatdown it has to have:

Now that we have the conditions, let’s look at whether LavaLoon fulfills these conditions. 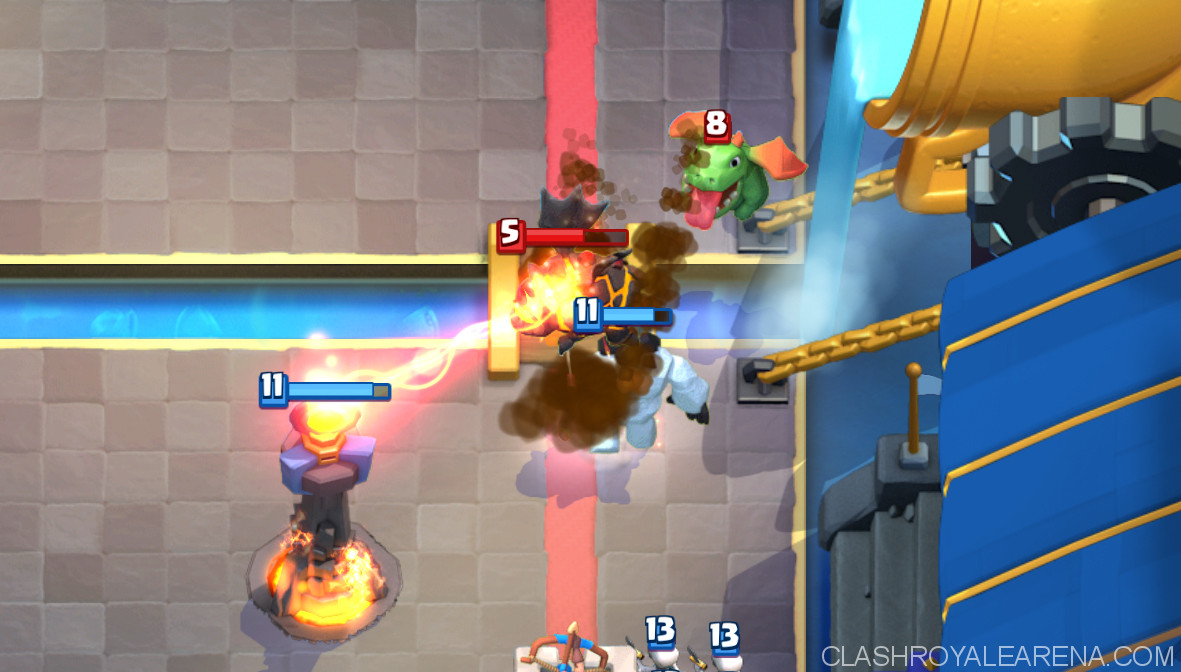 Why should you use LavaLoon? Pros and Cons!

The LavaLoon is one of the most powerful combos is Clash Royale and is also one of the easiest to learn.

For attacking, your mindset should be simply “Okay, got my Hound and Loon in, now save up elixir for the spell or support.” Easy, right?

Defending can be a bit trickier, especially if your hound deck is one of the mainstream decks that uses mostly squishy units and spells to defend.

An example push might be Giant Musketeer Executioner. Pull Giant with Tombstone placed in the middle, distract Executioner and Musketeer with Baby Dragon and kill them with Minions. We get a +2 elixir trade there, and right now we have a lone Giant, which we can kill with our remaining Minions and the Tombstone Skeletons. If the opponent zaps everything, simply place down your Skeleton Army.

Let’s look at the elixir trade we gained from this:

After this push, if you have enough elixir you can counter push with Hound or make a mini-push with the Balloon. With enough practice, you can successfully defend against all types of pushes in this manner, whether it’s elite barbarians or Golem to when it’s Giant or Hog.

Now that we’ve looked at the pros of LavaLoon, let’s take a look at some drawbacks of using it.

Luckily the RG deploy time is getting nerfed so it will give you a bit more time to get elixir to counter the RG.


How to use LavaLoon effectively?

Looking at a sample deck. The deck I’ve chosen for this section, as you may know, is the LavaLoon Lightning.

I’ve been using this deck ever since I got the Hound back in Jungle Arena. I was stuck in Jungle while using RG Lightning (it seriously was getting me nowhere) and then I got the hound from a legendary chest

I wasn’t too happy about unlocking him, but once I started using Hound Loon, I realized I had found my perfect match.

In just two weeks, I pushed from low Jungle to high Hog Mountain using only tourney standard cards (except for my commons, which are level 10.) Right now I’m sitting at about 3900 and I believe that I can push up to Challenger I soon. But let’s set the narratives aside, and actually look at how to play this deck. 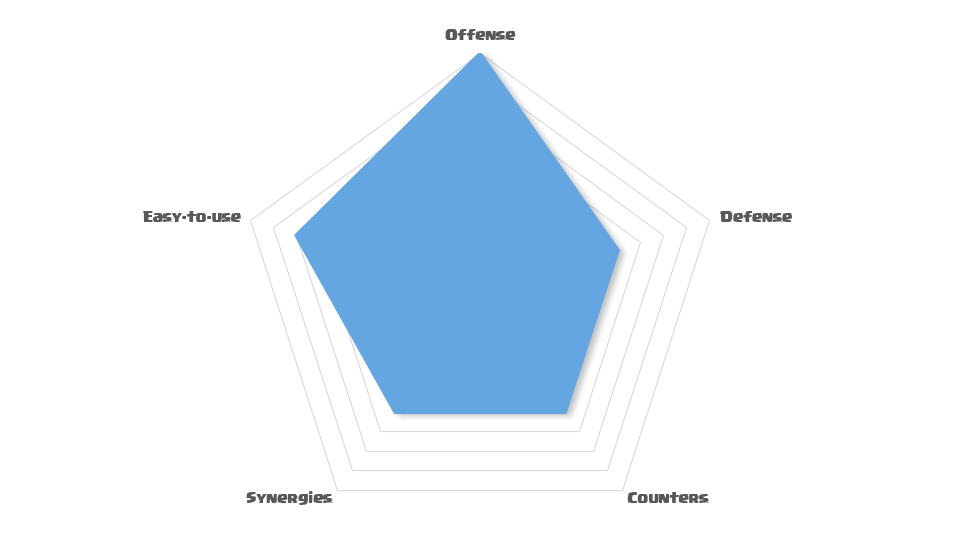 Lava Hound: The tank. The Lava Hound is one of the most popular cards in the game right now due to its ability to tank huge damage as an air tank and the Lava Pups that pop out once it dies. If the opponent doesn’t have an immediate counter to these pups, they will wreck the tower. Always place him behind one of your towers, as his slow move speed can buy you time to build up elixir and start a push.

Balloon: The kill card. The balloon is honestly one of the most OP cards in Clash Royale right now because of its huge death damage and high overall damage. It feels fitting that it’s getting nerfed, else it would become like flying Elite Barbarians. But even with the nerf, it’s still powerful and can destroy enemy towers if not countered immediately or if it is behind a tank. Play it behind a tank most of the time, but you can send it in alone at the beginning of the match for some chip and also getting to know your opponent’s counters to your air troops.

Mega Minion:  I bet everyone knows how to use this guy properly. He is a great support for your pushes, with enough HP to tank and kill any distracting units such as Musketeers, Minions etc. Also use him on defense as a support distractor, while your minions and Skeletons annihilate your opponent’s support and tank.

Minions: These guys can do some big chip damage to your opponents towers and can decimate your opponent’s troops if another troop is tanking for them, all for just 3 elixir! The only drawback to this troop is its HP, as it is extremely squishy and can be taken out very easily. Always make sure that your opponent has their counters for Minions out of hand or that they are low on elixir before you play these guys. You can also have a bigger troop such as hound or Mega Minion tanking for them (this I’m talking both offensively and defensively).

Tombstone: This card was really popular back when Elite Barbs were the meta due to it’s capability to distract troops easily. Now it has fallen in popularity because of the rise of beatdown, but it is still pretty strong. Place it in the middle before you start defending. What this will do is that it will pull the tank to the middle, giving you time to destroy the support before killing the tank. Back to what I was saying about distracting troops easily, a well placed (and high enough level) tombstone can take out elite barbs on its own, and the hog rider will only get one hit off your tower after destroying the tombstone.

Arrows: Arrows is the only splash spell (or card) you have in this deck, so use it wisely. It’s primarily in this deck so you won’t have that much trouble against spell-bait and Minion Hordes, but it can also be used to kill troops that have left over HP which could potentially be used in a counter push.

Lightning: You will mainly be using lightning offensively in this deck, alongside your big pushes to clear away your opponent’s defending troops such as pesky Executioners, Wizards, Musketeers etc. You can also use it to stun and do massive damage to the inferno tower, or you can use it defensively when you have no other options but to destroy their tank and support with a lightning.

Skeleton Army: The skeleton army is the defending card you use after the opponent has played their Zap or Log. This army can annihilate even the biggest pushes for a huge positive elixir trade, but be sure to use it only when you know the opponent’s spells are out of rotation. You can also use it to surprise your opponent at the beginning of the game, as placing it right after the game starts will catch them off guard, and they will need an immediate counter to it, hopefully destroying their intentions of getting that early push in.

(Note: I know that I’ve said that for big pushes coming your way, use Tombstone to distract and Mega minion and Minions to kill support, with Mega minion tanking (only when their support is over leveled). This only works for single target troops, and this strategy would get destroyed by splash support. The best way to take care of this problem is to simply lightning their support. I know this sounds like a desperate move, but now that they’ve wasted their splash attacking troops on the big push, you can go in with a LavaLoon push from the back. Of course, they could cycle back to their splash troop but by that time your hound and loon will probably have made it halfway past the other side, sooooo……RIP the opponent’s tower.)

See the video below to see how I energize the cards in the deck to form a well-rounded strategy.

That’s all for this guide. I hope you found this informative and will have success with the LavaLoon.

With that said, this is DownWithTheRG out!