Hi guys, It’s F▪▪▪▪▪▪O▪▪▪▪▪▪X again and this time I am here to share an easy to use Lava Hound Deck I’ve been using recently. If you haven’t yet, check out my GiWiVa deck for Arenas 5 through 8! 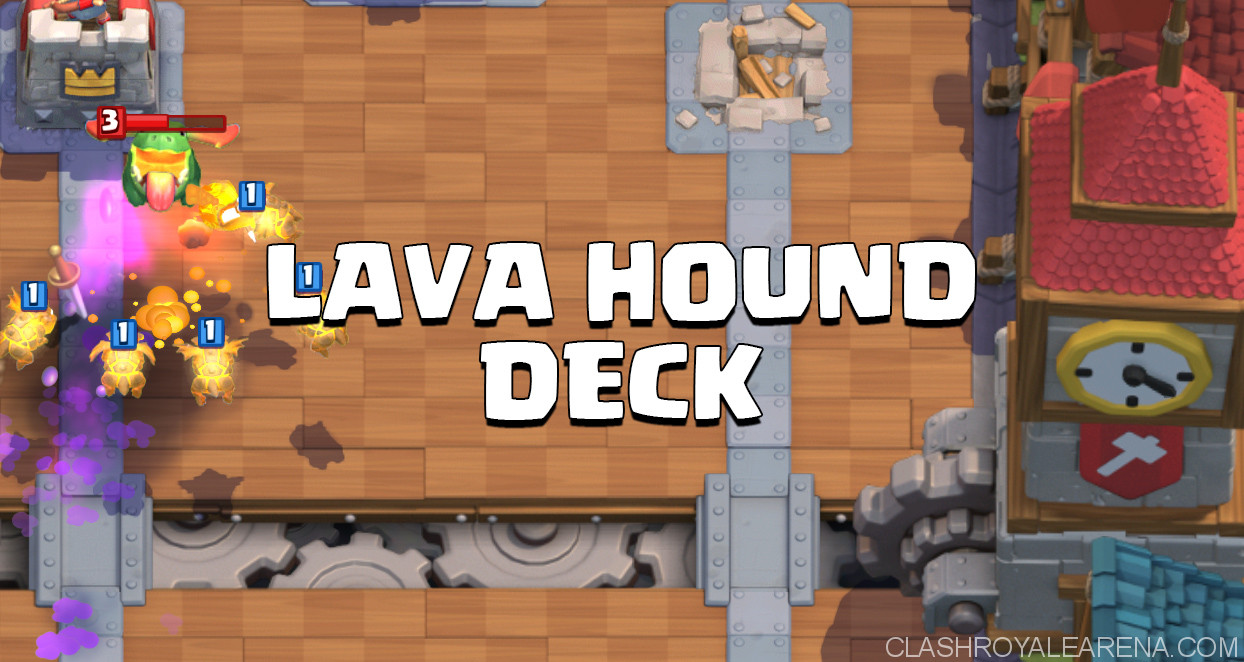 Lava Hound: As the name suggests, this deck centers around the use of the Lava Hound and its Pups. The Hound is a flying Giant without the punch… until the Pups come out to deal the real damage. The goal of this card is to tank to Tower, protecting all troops behind it and then taking out a chunk with the pups.

Minions: These little guys can be used behind the Hound to protect it and do damage to the tower before the Pups come out. They also can help on defense although their low health makes them a liability. Most importantly this card, along with most of the others in this deck, are used to draw out spell cards and arrows so the pups can do work.

Minion Horde: More Minions to do more damage! These guys shred through a giant or a tower, if they are hidden behind a tank, making them quite deadly if not taken out immediately. Not much more to be said due to the fact it’s just twice the minions. Again, though, these guys are used to draw out arrows or spells so that any of the other cards can go to work so do not feel bad at a -2 elixir trade if your opponent arrows them.

Spear Goblins: This versatile card features in all my decks because of how handy it is in all situations, even if it might be less effective than Goblins or Archers. The main purpose of this card is to pair it with minions behind the hound. Either your opponent arrows/zaps them leaving room for the pups or let’s them do work while the hound tanks away. Don’t be afraid to use this low cost card on defense to chip away at your opponents cards health from behind your tower or as a distraction to pekkas and Princess.

Valkyrie: Another useful card. This time and in this deck it features mostly on defense. The valk works great due to its ability to hit many cards at once. It is also useful as a mini tank to protect the other lesser cards. Maybe, for this deck, the most useful feature of the valk is to counter wizardstrike.

Fire Spirits: The best card in my own opinion! At 2 elixir Fire Spirits offer the best chance to generate positive Elixir trades for you. While not explicitly used on offense or defense in the sense other troops are, these little guys are great for countering low health cards like Minions and Goblins. When placed right the can also take out Witches, Wizards, Musketeers, and P.E.K.K.As. And when placed perfectly the can help your tower take out a sparky resulting in a +4 Elixir trade for you and no damage taken. Do not be afraid to use them on defense for this cards but also don’t be afraid to throw them out on offense to protect your cards from these as well.

Arrows: IMO every deck needs arrows or zap…I prefer arrows solely because they take out minions and Princess. So use this card to take out small troops attacking your tower or your cards…there is not much more to it everyone knows what this card is and how to use it.

Cannon: Again, I believe every deck needs a defense card. I prefer the cannon because it is a great counter to Hog with the potential for a positive elixir trade and also distracts the Giant enough to take it out for an even better Elixir trade. Of course you can switch this out for inferno or bomb, it’s based on how you play but I personally like the Cannon.

This deck has 4 parts to it: Hound, Minions+Goblins, Minion Horde, and defense. The first three are all susceptible to arrows or spells but that’s what makes this deck what it is, once drawn out the other two parts have free range. The main goal is to drop the Hound in the corner once 10 elixir is reached. Follow it up with either the Horde or a Minions+Goblins combo. The hopes is that Arrows are drawn out and the Hound can take the tower or that your opponent saves them for the pups and the Horde or combo takes the tower.

Defensive Cards: treat defensive cards like cannon and bomb tower like you would the Crown Towers, use the Hound as a tank and take them out then continue on. NOTE Inferno Towers are a bit trickier because you will now send out either Minions to deal with it before it can take out the Hound. Even if it kills the Hound, not all is lost because the Pups then might salvage you some damage! Lastly, if you place your Hound into the corner as far left or right as you can it had a higher chance of ignoring a centrally placed defense and heading straight for the tower.

Defensive Troops: expect to see Musketeers, Wizards, Goblins, and Archers used to try and counter the hound. No big deal, when the hound is followed up by the combo or the Horde they should deal with these cards nicely enough. When minions or goblins are used as a counter the arrows or Fire Spirits work the best to take them out fast. Remember the only goal here is to get the combo or Horde to your opponents troops before the Hound is killed so the Pups have free range at the tower and aren’t distracted by troops. Other than that, as long as the Hound makes it to the tower before being killed I do not care how much damage is done to it by your opponent because the hounds damage is negligible but the pups are what you want!

Wizard: This guy can be a pain because he counters Minions, Spear Goblins, Minions Horde, Lava Hound, and the Pups. When he is used to counter your Hound there are two scenarios. On he is placed in front of your opponents tower. If he is wait until the Hound is at the tower so that the wizard is facing away from your end and is firing back at his tower! Then you are safe to deal with the Wizard with your Minions and Goblins without them perishing from the fireballs being hurled. Two, if the Wizard is on the sides of the crown tower shooting his fireballs out towards the river follow the Hound up with your Valkyrie so it can take care of it.

Cannon and Valkyrie. That’s your backbone for defense. The Minions and Goblins are just support if needed. If a building targeting troops is being used the Cannon is your primary go to. Save the Valk for troops sent behind this building targeting troop. The Valk is also used for other ground troops like the Barbarians, Musketeers, Witches, and Mini P.E.K.K.A for even or positive trades. Sometimes you need an extra punch so don’t be afraid to use minions or the spear goblins to help with pushes from your opponent or the horde if you are really desperate!

As with all decks and this game in general, there is strategy involved only learned from trial and error and practice. Do not expect this or any of my decks to work for you right away! You need to learn to use it by using it! If you are still confused or have a question ask in the comments or ask me in the game in my clan SBSP! We except all players and look to talk about aspect of this game! Come with an opinion or a desire to push and we can help!