Hey guys, Leonex here. I wanna share a really fun and good deck that I’ve been recently using a lot the past few weeks. This deck got me up to 3800+ from 3500 with tourney level cards. (well not much but it’s still something). This is also the deck that let me complete the grand challenge with only 1 loss. I even beat a 4900 player with this deck.

The general gameplan for this deck, like any other giant beatdowns, is to build up your push. Get an elixir advantage and start building your push either from the back or throw in a sudden counter-push depending on the situation. 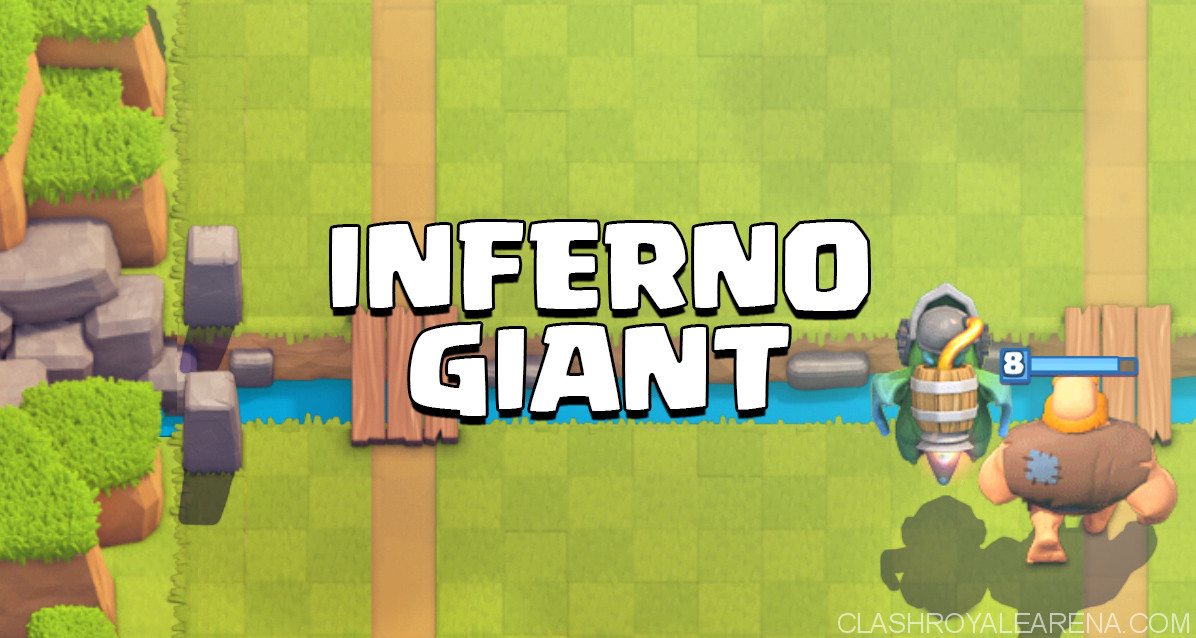 Giant Inferno Dragon Deck for Arena 6 and above

Giant: The Giant is currently one of the most used cards in the game, and for a good reason. It can act as a tank, a defensive wall, and even as your main damage dealer. You would usually put a Giant at the back of the King’s Tower to build up a strong push easier. Ideally place him down when you have at least 1 Collector. To play Giant defensively, place the him down to soak damage before you place your defensive cards, usually in the middle of your side of the Arena. An important note is to think of the defensive Giant as a last solution. If you can defend without using the Giant, then don’t use him, save him for your counter-push. It’s all about knowing when to push and when to play defensively.

Inferno Dragon: One of the most deadly card if played correctly. People have been saying to me the Inferno Dragon is way too easily countered and that they think it’s not that great. Well they’re not wrong. It is easily countered. Minions (and Horde), Zap, or pretty much any air damaging cards. However, that’s assuming you only push with 1 Inferno Dragon. But really though, who in their right mind would that. You have other cards to support your Dragon so use it. A lot of cards can help it. Ice Wizard, Minions, Poison, and many more. The Inferno Dragon can melt most, if not all, big pushes, as long as you watch out for those pesky Minions. One way to defend is to distract his cards with the Giant and kill em’ all with the Dragon. I’m pretty sure we all know that once this thing locks on to a tower, that tower’s gone.

Ice Wizard: My favorite card in the game, best support ever. The Ice Wizard can work with most decks because of its versatility. Whether you’re defending with the help of your Tower or supporting your Giant pushes, the Ice Wizard can be a game changing card, and all for only 3 Elixirs.

Minions: Your secondary high DPS card. Unlike the Inferno Dragon, the Minions have a high DPS without having to wait a few seconds. This can be very useful for killing Hog Rider, Miner, Musketeer, and many more. Just be wary of Wizards and other area damage dealer. For example, if you know your opponent has a Wizard and has enough Elixir to put one down, then wait for his Wizard to come out and throw in your Minions when he’s distracted with something else. Minions can also provide the best distraction for this deck’s main weakness, Inferno Tower and other Inferno Dragon. Consider replacing Minions with Mega Minion If you want!

Poison: The Poison gets rid of a lot of counters to this deck. Minions, Goblins, etc. and can even nearly kill most glass cannons like the Musketeer. The idea is to try and get as much value with the Poison. It’s relatively easy to get value with Poison compared to other damage spells like Fireball and Arrows because it stays and deals damage over time and has a large radius. So if my opponent decides to wait for the Poison to finish before placing his cards, what do i do? Nothing. By the time the Poison finishes, his tower’s gone. Plus, it slows down troops and buildings. Additionally, you can also use it for defense if you must. It works well for defense as well, especially against large groups of troops.

Mini P.E.K.K.A: The Mini P.E.K.K.A kills glass cannons, tanks, mini tanks, and even deals a crap ton of damage to towers. Although you’d mostly use it for defense, you can still use it for attack as well. It can protect your Ice Wizard from Valkyries and other MPs or just simply deal a lot of damage to towers (including the annoying Inferno Tower). After a successful defend, drop your Giant right in front of the Mini P.E.K.K.A so he can push the Giant reaching the Tower faster. Take a look at this page to read more about the Pancake Hero!

Zap: One of the best cards in the entire game. What else is there to say? 2 elixirs for so many different purposes. With its versatility, nearly every deck uses the zap. The addition of the Inferno Dragon gives you more reason to add it to your deck.

How to play the deck

Whenever you have the Collector at your starting hand, place it down in the back. Unless your opponent throws a Hog or Prince at you right off the bat, this should be done most of the time. Defending with 5 Elixir isn’t actually too hard. A Hog can be killed quickly by an Mini P.E.K.K.A or Minions and a Prince can be easily stopped with a Zap and one other card.

After you defended enough, gained enough Elixir advantage, and have 2 Collectors up and running, start by putting down a Giant behind your king tower. You can then slowly build up pushes by placing down other cards.

One thing to note is to think of what cards to support your Giant with. You have to be able to figure out what to put down rather than have a fixed plan. Plans can change as you face different people. If your opponent has an Inferno Tower, then save your Minions or Zap. If you know your opponent has lots of high hp troops, then use the Inferno Dragon. It all depends on what deck you’re facing against. The rule of thumb is to wait til you have 9 or 10 elixir before you place anything behind the Giant. Wait for what your opponent puts down before you put down your card.

Counters for this deck

One thing to watch for is the Miner. The more I play Giant beatdown decks, the more I come to despise yet desire the Miner. Why? Because your Collector’s always gonna be in trouble. What i usually do is put down an Ice Wizard or Mini P.E.K.K.A to distract the miner. The thing is, you don’t always predict where the Miner will exactly pop up. If it’s just slightly further away, then the miner will start targeting your Collector and you can lose 2 or 3 elixir depending on what card you used to take out the Miner.

I rarely face Rocket cycles, but when i do it’s extremely irritating. They never let you keep your Collectors and at the same time damage your tower for a significant amount. Just be careful of where and when you put down your cards.

One important thing to keep in mind is to spread your card placement to avoid area damage, especially Rockets and Fireballs. For example, take advantage of your flying troops and place it close to the middle when you want to push since they can go over the river.

Try not to be too afraid to put down the poison for defense. The first time i started to use poison, i only used it for offense, but it’s actually a very great defense if used properly. Just don’t overuse it until it goes to waste. As long as you think you can get value with it, use it.