Hey guys, HS is here to write another guide for you guys! This time, it’s about the Inferno Dank Bait deck. 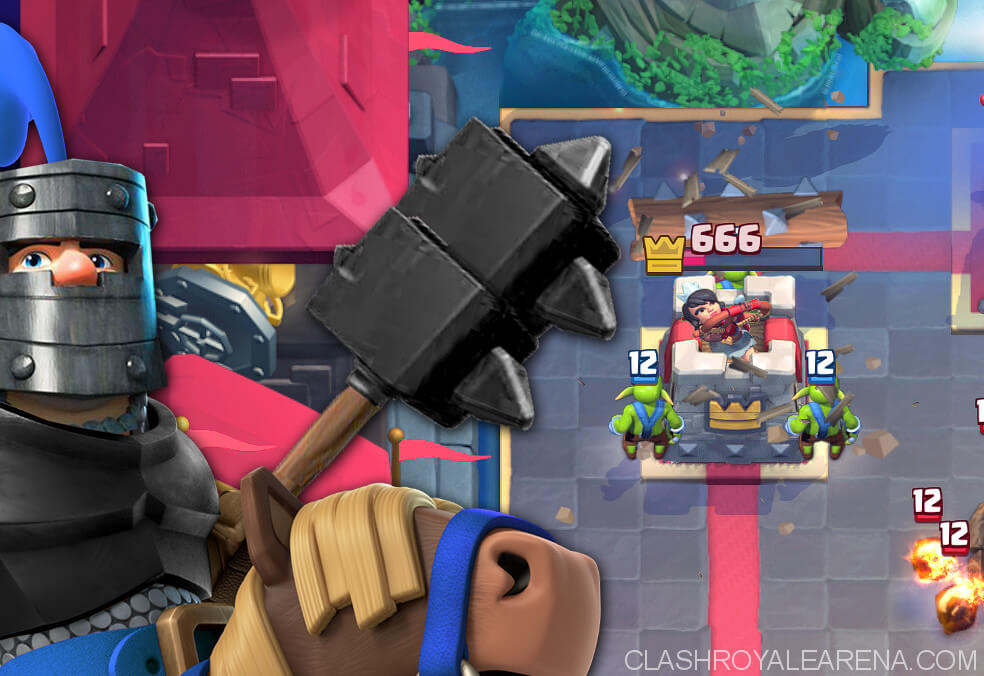 Since I don’t have Magic Archer, I turned to other cards.

I tried to experiment with troll decks using the element of surprise, but no such luck. After days of messing around, I finally found a good card, the Dark Prince!

He was buffed, which made him pretty good!

With new dank Prince decks getting created, I decided to make one too, with my favorite cards, the Gob Barrel, Gang, and Princess(aka bait).

This deck works really well in Challenges and the Ebarb filled ladder, not sure about MA though, mostly because I haven’t the chance to test this against him. You could say the bait deck takes a “dark turn”(pun intended).

I already said I think he is good, didn’t I?

The recent balance changes buffed his hit speed and health, and most people decided to utilize it to max.

Honestly I never thought I would use DP in a bait deck, but here I am.

There used to be Knight in this spot, but since Knight got nerfed hard, I substituted him for DP. He performs a variety of roles in this deck.

He has splash dmg and decent health, which allows him to take down supports with ease(feel free to throw a Log if you think DP isn’t enough), while Inferno Dragon eliminates the tank.

He is excellent against three Musketeer pushes and bridge spam as well, due to his AOE.

If you are desperate, he can even tank with his health! I would say this guy is your core defense.

Princess: What would a bait deck be without her?

She is the card that makes your deck work, meaning she is both defensive and offensive.

Some might frown at this card, as she can be killed by Arrows and Log, and only has DPS of 46.

All she is good at is sniping troops from a distance, and that doesn’t seem like much, right? But her annoying range means she can snipe the Tower, which always forces out a reaction from your opponent, preferably their small spell.

Even if it isn’t their spell, you can sabotage their plan and control the battle.

If they Log something else, she can easily take out glass cannons, serving as a defense card. To sum it up, she is beneficial to your deck, especially bait, no matter what.

Although I just said it serves as the win condition, almost everything in this deck is a win condition, so you don’t have to solely rely on it for chip damage.

A Dark Prince, Princess, Goblin Gang, even Ice Spirit can do the job. But you’ll want to use this card always for offense, because using it on defense means just expensive Goblins, usually meaning negative trade.

And also, this card can deal way more damage than a Rocket if used correctly.

This deck is kind of like my last deck (X-Bow control), you have to bait out a certain spell, in this case their Log.

Use your baity cards to force them into using Log, or simply outcycle them, and throw your Barrel.

You can also punish them when they overcommit.

You don’t have to, but using a tank to soak up Tower damage is better than throwing it alone.

Sometimes people wonder why this card is even in the deck, and why not Guards?

This card is mostly used for defense against bridge spam troops, but just like any other card in this deck, this card can also be used to chip down the opponent’s Tower.

Inferno Dragon: Once a sorry excuse for a legendary, now a must-have in various decks!

The main reason would be the power to melt down literally anything for 1 less than Inferno Tower.

It uses the same mechanism of Inferno Tower, meaning it can dish out more than 1000 damage per second at max power, making him the perfect card for the tank killer slot! However, this comes with a catch.

When building up power, he can be zapped and resetted, which is very annoying.

This is when the power of Zap bait comes in. the opponent could Zap the Inferno Dragon, then Goblin Gang would do the job, and you could counterpush with a Goblin Barrel, while the opponent cannot do anything against it.

Anyway, use this card to kill any win condition, including Hog! Surprising, right? But I heard somewhere that if you time it right, the Inferno Dragon can kill Hog quickly, only allowing a hit off!

You have to make a choice between the Ice combo.

Ice Spirit is cheaper than Ice Golem, making it a better cycle card. Ice Spirit can also Freeze troops COMPLETELY for 1.5 seconds and does small AOE damage, so it really pays itself.

As for the Ice Golem, this card pays itself too, by amazing health for 2 Elixir. The health makes him ideal for tanking for Inferno Dragon or Dark Prince, and it has a bigger splash radius than Ice Spirit.

Both are very amazing, but I personally prefer Ice Spirit since it is so cheap, and overall lowers the cost of the deck.

This spell is solely for eliminating glass cannons, such as the popular Three Musketeers and Minion Horde, maybe Magic Archer.

It is also possible to Fireball a Pump, but before you do that, make sure if their deck contains Three Musketeers or not.

Trust me, you don’t want to see a full Three Musketeers push.

Log can completely kill Goblin Barrel, which makes your life much easier against Mirror matchups. It is also lighter than Tornado and doesn’t take as much skill.

As for Tornado, this card can do a lot of things, depending on your skill.

For starters, if you have nado you are immune to Hog decks. You can easily activate your king Tower, or slow down and mess up their push completely.

For me, I would go for Log because it is lighter and easier to use.

Just like any other deck out there, you have to get a feel of your opponent’s deck and play accordingly. To achieve this, you could either wait out your opponent, or play passively first to save Elixir.

Here are some good starting plays:

Every one of them except Ice Spirit draws out their light spell or a card.

Pay attention to what they use, since it gives you an idea of what they are using.

For example, if you spot a Battle Ram, you could assume that they are using Three Musketeers or bridge spam.

If you have successfully figured out which deck they are using, then change your playstyle.

There will be a short guide on how to face each popular deck below.

And get chip damage.

No aggressive plays at this point, unless your opponent overcommits and you’re sure about it.

Just throw some Barrel to get chip damage in.

This is the perfect time to get in some Goblin stabs, or any kind of chip damage.

Unlike beatdown decks, this deck excels in single Elixir because of how light this deck is.

By now you should have an idea of what your opponent is using. So cycle princesses and barrels to keep the chip damage in, and hold onto your Dark Prince, and be sure to control the match by Elixir leads, better hand(cycle certain cards to make the perfect counter hand), etc.

You would mostly get chip in by counterpushing, although Goblin Barrel is nice too.

In a single sentence, this time is equal to Double Elixir for beatdown, where you have to apply as much damage as possible.

Defend, and Fireball or Rocket cycle their towers.

Since this is Double Elixir, you can quickly recover your Elixir and set up a decent defense.

Make sure to get value spells by killing nearby troops and Tower together.

However, this doesn’t mean you can’t attack with troops! Unless they have two or more light spells, keep counterpushing and you’ll seize the win.

Hog Rider: Not as OP, but still usable.

I haven’t seen much of this card lately, and he really isn’t a problem for this deck, especially if you have Tornado instead of Log.

Hog can be easily taken down by Goblin Gang or Tornado, or even Knight and Ice Spirit, although this combo allows their Hog to get a few shots off.

Still, the remaining troops can be used for counterpush, and they will be at Elixir disadvantage.

And most Hog decks don’t use multiple light spells either, which makes it really easy to get damage through Goblin Barrel (just switch up placements from time to time).

This card is seeing a lot of usage now, in both overleveled noob leagues to ultimate champion.

There are a few variations of this deck, which are:

Those matchs can be rough somewhat, since they usually run Poison which is capable of melting your swarm Army in matter of seconds, and severely damage your Inferno Dragon.

Furthermore, if you aren’t paying attention, their Ewiz can stun your Inferno Dragon.

Never fear, with some good plays the table can be flipped.

Punish whenever you can, try to bait out their Log, and Fireball their glass Cannon to chip their Tower.

Unless Ewiz touches your Inferno Dragon, their Giant is good as dead. So don’t be cocky, and this won’t be that awful.

Usually they use Knight or Miner, even Royal Ghost in place of Dark Prince, and DP is the only reliable splash dmg in this slot, so you’ll have a bit of an advantage here.

Be sure to keep Log for gob Barrel, because even a hit from it can result in them cycling Rockets, which is the case you should try to avoid.

Use Princess and Dark Prince to clear swarms, Ice Spirit for cycle and side swarm clearance and always counterpush.

You can handle those in two ways: Fireball the Pump and nado the Musketeers together, and deal with the push with your remaining cards, or just Fireball two Musketeers.

The latter is safer, while the other is more rewarding somewhat because you prevent negative Elixir trades.

Guys thanks for reading this almost 2000 words guide, really means a lot (maybe medium) to me.

If you have any questions, please ask.