Ice Wizard is one of the first Legendary Cards and hands down one of the best cards in Clash Royale. We can see him almost everywhere above Arena 5. People love using him because of not only his special slow ability but also his awesome appearance. 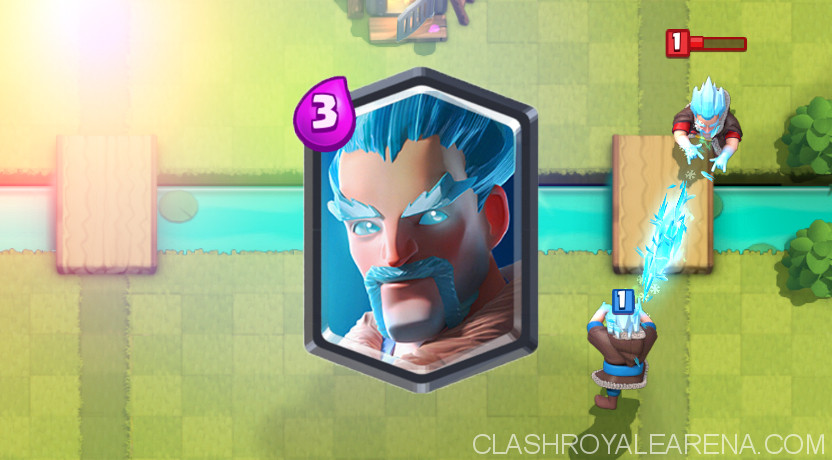 I was extremely lucky enough to get the Ice Wizard on the day it was released so I have had a decent amount of time to find the best uses for him!

The Ice Wizard is primarily defensive troop. I have broken down the best ways to use him on defense below. I am also going to show you how to use him situationally, instead of against some specific decks before the meta always shifts pretty fast.

Large pushes usually use a tank such as Golem, Giant or Royal Giant in front of supports to soak damage, protecting the support troops behind. While dealing with this deck archetype, separating the supports and the tank is extremely important!

I will use the Giant + Musketeer + Minions push for example. While dealing with this push, I usually use the Inferno Tower to separate Giant and Musketeer, I also use Ice Wizard to distract the Minions from my placed Inferno Tower.

Then, I use the Ice Spirit to stop the Musketeer from damaging the Inferno Tower.

While dealing with Golem Witch beatdown deck, I usually use only Ice Wizard and Inferno Tower to shut down this push entirely. First, I use the Inferno Tower to pull the Golem to the opposite lane, allowing me to deal with the Minion Horde a lot easier!

Then, I use the Ice Wizard and Zap to take out Minion Horde. After taking out the horde, Witch shouldn’t be a big deal at all.

When defending against small pushes, the opponents usually use fast paced cards like Mini P.E.K.K.A, Hog Rider or Lumberjack. Using Ice wizard can be super useful to slow the entire push, making it a lot easier to counter.

Although it may be a negative Elixir trade when using the Ice Wizard + a defensive building/troop to deal with a small push, you can use them all for the counterpush afterward!

Yea this is probably one of the most popular pushes in Clash Royale. Hog Rider pushes are usually pretty cheap, which can catch you off guard. Using Ice Wizard can slow down Hog pushes and stop the supports from dealing tons of damage to your building.

For example, I use Ice Wizard to distract the Mega Minion from hitting the Inferno Tower

I also use Inferno Tower to directly counter the Hog and distract the low damage Archers behind. After taking out the Mega Minion, Ice Wizard starts hitting the Archers, allowing me to make a great counterpush with the survived Ice Wizard.

Dealing with small and fast attacks can be very hard sometimes because you don’t know what you should play for a while. Using the Ice Wizard in those situations can slow them down a bit, giving you more time to defend better.

For example, my opponent places the Miner to protect the Minion Horde coming towards my Tower. I use Ice Wizard + Zap to distract and then kill the Minion Horde. Then, I use the Lumberjack to take the Miner out.

This would be a bit expensive but it allows me to build up a big counterpush which could take out the opponent’s Tower entirely.

Please note that these are just plain examples of some familiar situations and how to use the Ice Wizard in those. You can use these strategies to deal with all deck archetypes.

Use Ice Wizard as a distraction

Because of the Ice Wizard’s cheap cost and his special ability, he can be great at distracting the opposing troops from dealing damage. He is also very useful even when you have expensive cards in your hands or no cheap defensive card.

Using him to pull opponent’s troops to the kill zone, where both of your Towers can lock on to them can be very useful. I am going to show you how to pull units with the Ice Wizard.

You can use Ice Wizard to pull these cards

All of the cards above should be pulled by your Ice Wizard. However If you are in a bad situation, using him to pull other units would still work! Just wouldn’t be effective as the ones above.

In order to deal with very fast or fast units, you will want to place your Ice Wizard like below when the unit is crossing the bridge:

In order to deal with slow or medium units, place your Ice Wizard like below:

Counter Pushing with the Ice Wizard

The Ice Wizard is very valuable in making counterpushes after your opponent’s attacks. He slows down the enemies, giving you more time to strengthen your push 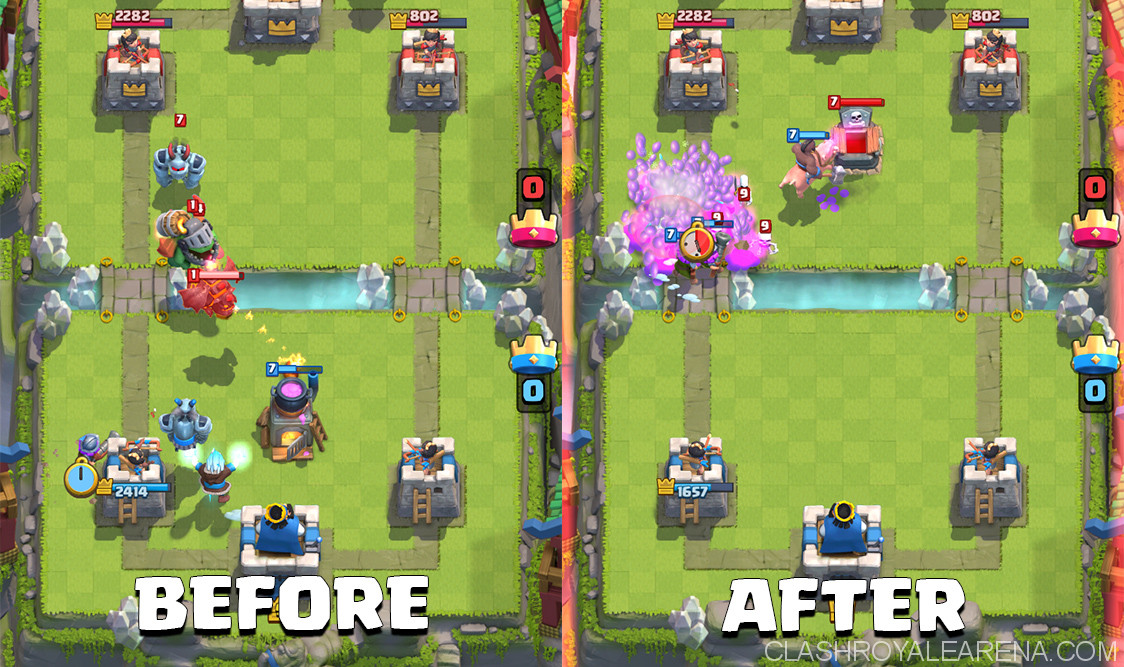 Please note that you shouldn’t use this technique as a win condition in your deck since not every deck has Fireball.

Unfortunately, this is the only way you can use the Ice Wizard to bait out spell, I believe.

It is fairly easy to counter the Ice Wizard, unless he is protected by other troop. Truly he is not the type of unit you want to protect because he is literally a support card and does a little damage.

Anyway If you want to protect the Ice Wizard, place him in a hard to reach position, fairly far behind your tank/Tower.

Below is the list of cards which can take out the Ice Wizard without taking much damage:

Knight and Mega Minion should be the best counters because they cost only 3 Elixir.

The second best counters to the Ice Wizard should be Mini P.E.K.K.A, Valkyrie and Lumberjack. Although they cost 1 more Elixir but they are the better options for counterpush.

Because the Ice Wizard is one of the most versatile troops in Clash Royale, he fits into nearly any deck due to his useful ability. Below are some popular decks which utilize the Ice Wizard a lot!

Shared by TheORIGINALvyper and 1998cr