Electrifying Hog Deck for The Ladder – Hog Cycle is Back! – Clash Royale Arena

What’s up fellow clashers, RohanReigns back here with another Deck guide.

This time I will be sharing with you guys a super fast moving Hog cycle Deck, that most of you might have seen in TV Royale but I have modified the Deck a bit to improve things up. It works really well in ladder and helped me to reach my new personal best. Without further ado, let’s get right into the cards breakdown section. 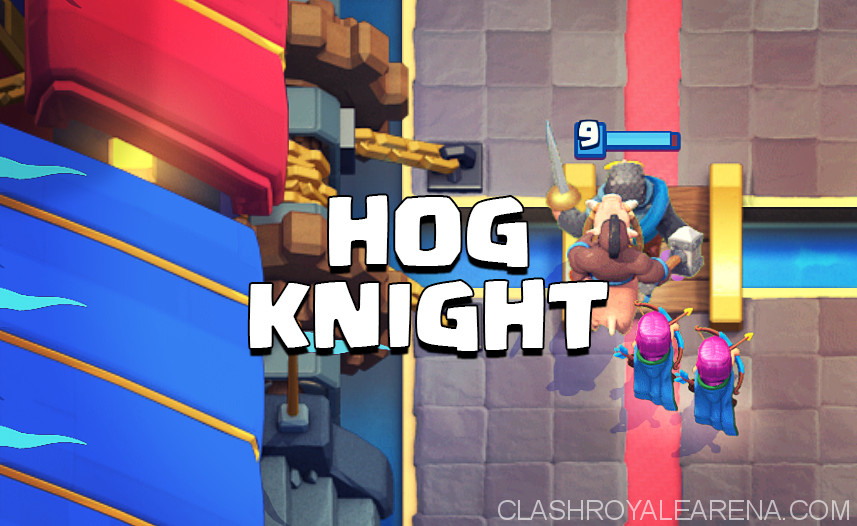 Electrifying Hog Deck for The Ladder

Hog Rider: The win condition  I think he no longer needs explanation.

He has always been in the meta since the origin of mankind. And why not, he has got super good stats and very fast movement speed (I think he had won the Clash Royale Olympics?).

Use this guy to damage their Tower slowly and steady, accompanied with your spells to counter their counters.

And if you could counter push with this card, it’s more devastating!

Knight:  I call him the meta king, your defensive tank in this deck.

Knight can kill glass canons, melee troops, swarms such as GobGang and Skeleton Army and so many other units.

While defending, use him to tank for Electro Wizard.

You can use him on offense as well, especially to counterpush with Hog Rider since he has got lot of HP. Remember to place your Hog Rider ideally behind him, so that their Tower or troops target the Knight first.

Knight+Hog combo can face opponent’s Tornado too as it disallows him to pull Hog to their King’s Tower.

Ice Spirit: He is a staple for a fast running Hog cycle Deck as he acts as a Mini-Freeze, allowing your Hog Rider to hit some extra swings.

Also can be strategically used while defending to counter variety of pushes. I love to use him with Tornado to Freeze cluster of troops. Read more about him here!

Goblins: Yeah, these meany super fast moving creatures are slowly getting back into the meta after the recent Skeletons’ nerf.

They have got amazing DPS and as spell-bait is slowly getting out of the meta (point me if I’m wrong), players are using Zap instead of Log, which can’t counter them. Synergies well with Hog pushes and call glass cannons too. Also great units for kiting!

Normally Goblins take two shots to get killed so they are reliable defensive troops too. You can substitute him with Skeletons if you still love Larry!

And yes unlike Skeletons, they require response when used offensively alone.

Electro Wizard: I prefer him over Musketeer due to variety of reasons.

First, he completely shuts down Sparky, Inferno Tower and Inferno Dragon (which just got a buff).

Second,  his stun effect can slow down troops, making it easier to defend.

Third, he has a entrance splash damage (I don’t know what it’s called) that are useful to clear swarms and Goblin Barrels, if you don’t have Log in hand.

But Musketeer has slightly more DPS and is F2P-friendly so using her instead won’t be a bad choice either.

Be careful with this card because he is your ultimate defensive card, especially in Lavaloon Decks. Can’t be Fireballed but dies to Lightning of course. So using him smartly is the key.

Tornado: This is the best card in the game right now! You can do a of things with this card.

You can activate your king Tower, which gives you a free Cannon the entire game. It’s the best counter to Hog Rider these days. You can cluster up their troops to Fireball them all. You can even use it on offense to prevent cards like P.E.K.K.A to hit your Hog Rider. You can de-split (is this a word?) your opponent’s Three Musketeers to kill them with your Fireball and prevent double lane pushes. Lots of uses and functionalities in just a three Elixir card, the Tornado.

While facing a Graveyard user, always activate your King’s Tower by tornadoing their tank and next time he plays Graveyard, you can easily counter it.

Fireball: Your secondary win condition in some matches. Use it to slowly demolish their towers while doing Hog pushes. You can use it on defense with Tornado as well.

Your reliable counter to Minion Horde so don’t waste it recklessly.

The Log: Replaceable with Zap or Arrows. Use it to clear ground swarms.

This is a fast moving Hog Cycle Deck which means that you will be doing Hog Pushes often throughout the game.

If your starting hand is Hog Rider, go for a Hog push. A swing or two for each Hog push is okay because it’s not a Deck that can grant you a Tower with a single push.

Never play your Ewiz at the back unless you have bad starting hands.

You main objective during this phase, will be to chip down their Tower with frequent Hog pushes and defending their pushes too. Don’t go for a full Hog push as it can deplete your Elixir bar completely and you can’t defend. Instead, go for light Hog Pushes and figure out their Hog counters. You can predict a fireballs, if it gives you value. Try to gain positive Elixir advantage before Double Elxir.

Now it’s time to ramp up your pushes.

Since your Deck cycles really fast, outcyling your opponent’s counters to your Hog will be the key to victory.

Now you can do some heavy Hog pushes such as Hog +Goblins + Fireball provided you have already earned some PEA (Positive Elixir Advantage 😂) during single Elixir time.

If your opponent’s Deck also cycles fast, then Fireballing and Logging their Tower along with solid defense, should be your mindset.

If you’re already a Hog Cycle player, you may know about the playstyle in Double Elixir.

Lavaloon: Can be a hard matchup. As soon as your opponent plays his Lava Hound at the back, go for a huge push at the other lane but never overcommit.

Most of the Lavaloon decks have Lightning so you need to quickly cycle back to your -Ewiz. Tornadoing and Fireballing can sometimes save lives! Don’t forget to take advantage of your Ewiz’s spawn damage.

Overall, it should be a tough matchup but I have got a lot wins against it too.

Golem: Same as Lavaloon. Kill their support troops with your Knight and Tornado their Golem to your king’s Tower. You need to be aggressive while playing against a Golem Deck as because Golem decks can easily take down a Tower.

Hog Rider Decks: Tornado their Hog to your King’s Tower and it’s pretty much a GG. But smart Hog players can catch you off guard, so always save your Tornado for nothing else but Hog Rider.

Should be a easy/medium matchup.

Spell-Bait Decks: They are slowly falling out of the meta.

This Deck can easily counter them as it has Ewiz and Knight which can handle swarms and Inferno Tower well.

Always counterpush with Ewiz if you think they have Inferno Tower in hand. You can’t catch them off guard, as they always have at least one swarm card in their hand to counter your Hog.

You main aim will be to outcyle their Inferno and then Hog+Fireball could generate PEA along with some damage on their towers.

Graveyard Decks: Always Tornado their Tank to your King’s Tower.

And if possible, don’t allow their tank to cross the bridge by using your Tornado. This way, your two towers can easily counter the Graveyard while your Troops take care of their Tank.

Should be a easy matchup if King’s Tower is activated.

Siege: Hog for their siege weapon, preemptive Log to clear pesky troops and Ewiz if they place an Inferno Tower.

Draws are often against such decks.

Three Musketeers: If you’re fast enough, Tornado the Three Musketeer to a single lane if they try to split it. By doing this, you are preventing them to do a double lane pressure, which Three Muskteers players aim to. Then, Fireball for their Musketeers, Log for their GobGang or any swarn troops and Ewiz for their Battle Ram.

Feel free to Fireball their Elixir Collector as you can cycle back to your Fireball quickly.

And the most important part while playing against such decks: take down their Tower as soon as possible with really aggressive Hog pushes.

That’s the end of this fairly long post. Do let me know about any flaws about this guide in the comment section below. Clash on! 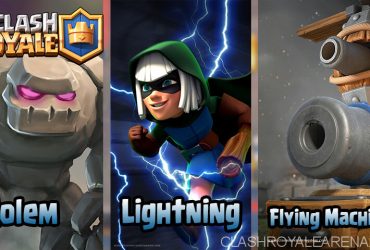 What’s up guys! This is MacTavish with my first guide on CRA. I have been longing to write a few guides for CRA and here is my first deck guide … 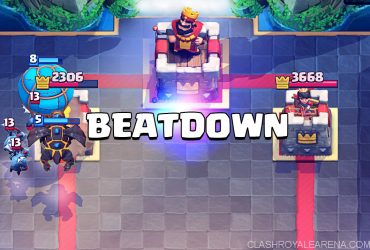 Hey Guys! It’s lightningmaster823 here and today I will show you the easiest ways to create your own Beatdown deck! Stupid-Easy Guide on Building Beatdown Decks! Deck Archetypes In my …