Hey guys it’s Ash and in this post, I’m going to teach you guys everything you need to know about the Ice Golem and more! I like to describe the Ice Golem as a 2 Elixir mini-tank that targets buildings and has the ability to slow down nearby units upon death. My favorite cards in game are cheap cards that offer a lot of utility, such as the Ice Spirit and Zap. And I believe that the Ice Golem is another very important and very good utility card that will play a major role in this game.

To start off, the Ice Golem is not meant to be an offensive threat. He’s one of the weakest units in the game, dealing only 28 damage per second at Level 7, even weaker than a Lava Hound. He has a slow down effect that activates after his dies. The slow down effect lasts for 3 seconds and has a radius of 2 tiles. He is a support troop that excels in defense. I’ll show you guys some key examples of how to use the Ice Golem as a defense later. But first, let’s talk about how you can utilize him on offense.

You can ignore a lone Ice Golem, as he will barely do any damage by the time he reaches your tower. However, you should almost never ignore any threat behind an Ice Golem. A 4 Elixir combination with Goblins behind an Ice Golem can take down a whole Arena Tower.

The Ice Golem is a very slow troop, but you can push him with fast troops like the Hog Rider, Prince, Dark Prince, or Goblins to make him travel faster. 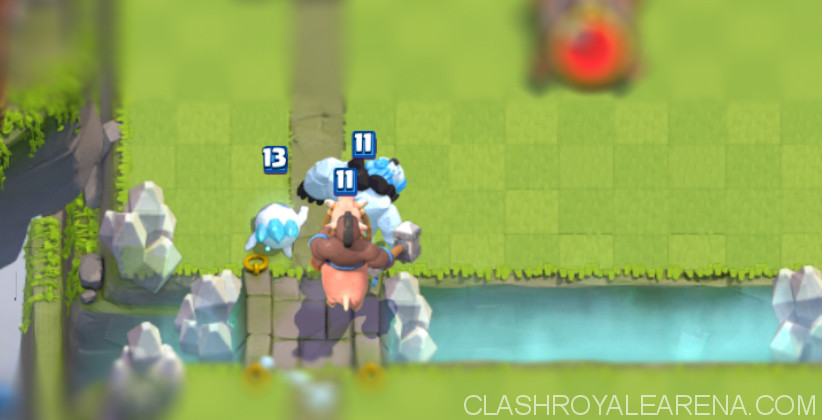 Lumberberjack and Ice Golem are also a very fun combination because the Lumberjack is of course a very fragile unit, so you can complement his speed behind an Ice Golem, pushing the Ice Golem faster. So imagine a combination of Ice Golem in front of Lumberjack, and then a slow troop like the Balloon behind them. If Ice Golem dies, he’ll slow down every unit, including the Arena Tower within his 2 tile radius. Allowing your Lumberjack to do more damage and Balloon to get to the Arena Tower quicker. And then when your Lumberjack dies, the Balloon will not only move faster, but also drop his bombs quicker.

Remember, the Ice Golem isn’t very tanky, he has less hit points than a Knight, so he’s definitely no substitute for a troop like a Giant. He’s best used defensively, So let’s now talk about his huge defensive potential.

Now let’s talk about the Ice Golem’s best defensive attribute, and that is kiting. The Ice Golem is the best “kiter” in the entire game for his cheap 2 Elixir cost. Making super deadly on defense.

Let me give you some examples of his amazing ability:

Other tricks with the Ice Golem:

So next time someone sends in a huge push like Giant Prince Mega Minion, remember to kite!

Hope you guys enjoyed this, be sure to leave a like if you did. Thanks for reading and watching my video, be sure to subscribe for more daily Clash Royale content. Thank you!

What do you think about this new card guys? How will you use him? Please share your opinions!