Hello fellow clashers! This is usc1313 and today, I bring to you some of the uses for the newly released Ice Golem showcasing its various capabilities by itself as well as combined with other cards. KairosTime featured my video replays with some awesome commentary in his most recent episode of Kairos Coaches! 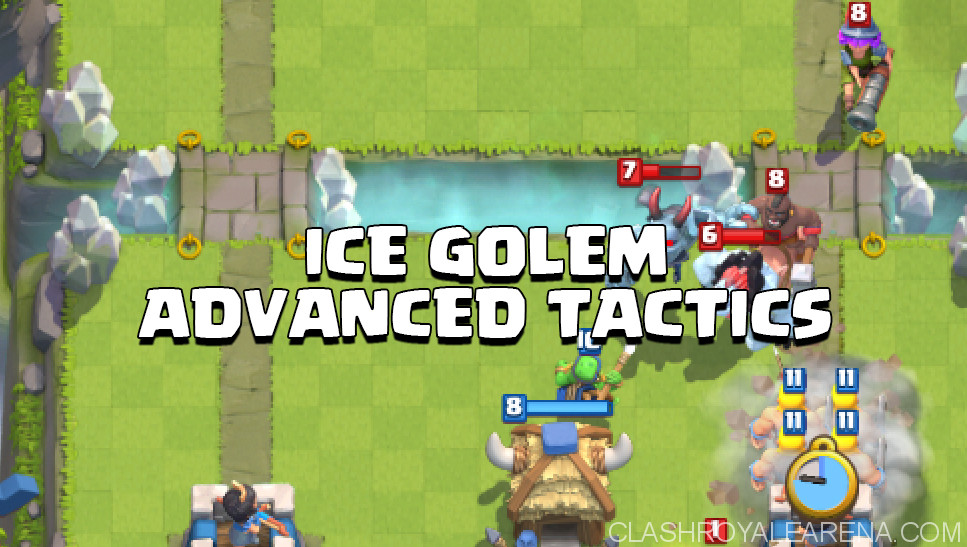 Ice Golem is a fantastic card because it offers something completely unique when compared to every other card in the game. With 1100 HP and the ability to target buildings, there is finally an official ‘Mini Tank’ in the game. These two aspects give it the unique ability to kite units reliably for only 2 elixir. With correct placement, the Ice Golem is fabulous as dismantling pushes and separating units. It’s large HP pool also makes it excellent at damage mitigation and prevention.

Take a look at the screenshot below for more details. 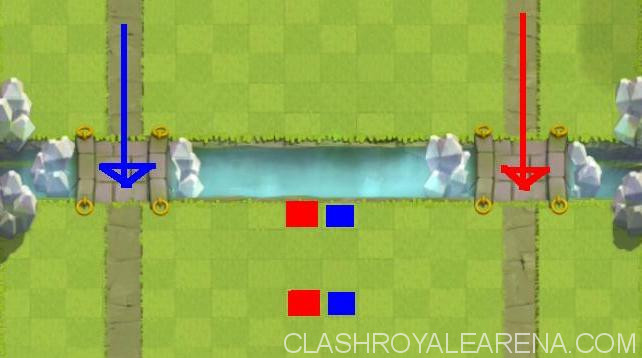 Musketeer + Ice Spirit Defense: It is common to toss an Ice Spirit in front of a Musketeer in order to cycle your deck. This push can deal serious damage if not dealt with correctly. An Ice Spirit is rendered useless in this situation, and the Ice Golem provides a much more reliable counter.

Barbarian Defense: Timing and placement are crucial for this technique. The Ice Golem needs to be planted 4 tiles from the river and 1 tile into the opposite lane in order to pull 3 of the Barbarians.

Prince Defense: This technique is extremely hard to pull off and negate all damage. Due to the AI of the Prince, the path it took (down into range of both towers after it killed the Ice Golem) is not a regular occurrence. For a more consistent counter, adding an Ice Spirit, Skeletons, or any other distraction units is a safe way to negate all tower damage. This also works with: Lumberjack, Mini P.E.K.K.A., Knight, Valkyrie, and Dark Prince, but I included a replay in the video for the Prince because it is the hardest to do.

Lava Pups Defense: Lava Pups can be a tricky troop to deal with if your deck is light on AOE spells or Air Defense. The Ice Golem provides a meat shield for your tower, saving your tower health and preventing you from dropping a more costly troop like a Valkyrie or Giant. A big key is dropping it as late as possible so the Pups closest to the tower do not target the tower instead.

Giant Skeleton Retargeting: This strategy works with any troop. The Ice Golem shifts the position of the unit, forcing it to retarget. If used correctly, it can save thousands of damage from your tower by retargeting big threats off of your tower.

Double Prince Defense: An Ice Golem combined with any ranged troop can completely negate damage from a Double Prince Push. If you add an Ice Spirit in, you can negate all damage onto your troops to set you up for a better counter attack.

Giant Mega Minion Defense: This push has gained popularity due to the difficulty of targeting a Mega Minion directly over a Giant. The Ice Golem solves this problem by drawing the Mega Minion into the other lane, leaving high DPS troops free from harm to melt the Giant. The key is in the placement of the Ice Golem. It needs to be placed directly at the river to draw the Mega Minion away from the Giant as soon as possible. The earlier you draw away the Mega Minion, the sooner you can place down your Mini P.E.K.K.A.

Lava Hound Mega Minion Defense: An experienced Lava Hound player will play the Mega Minion on the border of the map to prevent it from being lured. This can be countered by using the Skeletons to draw the Mega Minion close enough to your Ice Golem to kite it into the other lane. It is key to place Ice Golem as late as possible so the Mega Minion locks on before it walks away.

Giant + Musketeer + Mini P.E.K.K.A: This is just an example of using the Ice Golem to buy time. It stalls the Musketeer and Mini P.E.K.K.A. as well as giving the Valkyrie extra time to take out the support by absorbing shots from the opposing troops.

Giant + Prince + Mega Minion: This is a perfect example of how to dissect an opponents push. The crucial timing in this example is not dropping the Mini P.E.K.K.A too early, otherwise the Mega Minion and Prince will ignore the Ice Golem. The spacing of the defending troops also takes away the opportunity for a valuable Poison.

Thank you so much for reading this guide! I hope it was valuable and that you learned something from it! Clash On!