Are any of you struggling to get out of some of the Lower Arenas? I have a great story to share. I don’t want to sound like I’m bragging or anything, but I managed to gain 900 Trophies in one day without losing once.

You can check out my Youtube Channel for proof. It is still a growing channel, and I will add commentary to my videos very soon. 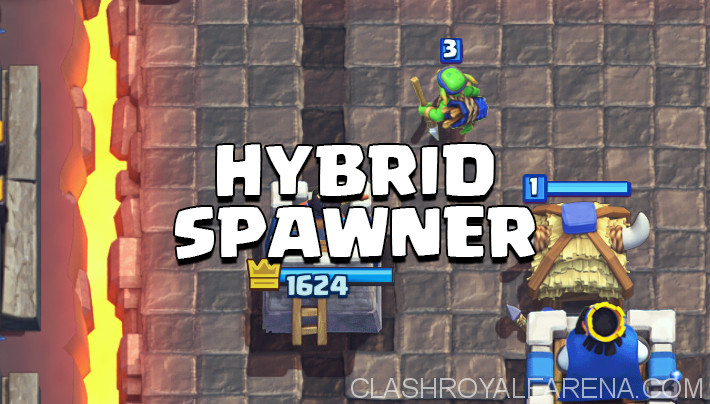 My friend has been busy for a while and unable to access his account, and he asked if I could do some trophy pushing for him. His account was a level 4 in P.E.K.K.A’s Playhouse at the time, which is already pretty decent. He doesn’t have any Legendaries, since that is his free to play account. He has a few decent leveled epics, but very few cards unlocked.

Looking over his deck, I first decided to go with his level 1 P.E.K.K.A, got a few three crowns for his two crown chests that were not unlocked yet, and then decided to try out a spawner deck.

I used to love spawner decks, but it doesn’t work at my current main account trophy status, so I wanted to have the opportunity to play with it again.

Also I really loved Spear Goblin hut in the draft challenge, choosing it almost every time, so I decided to try the deck out.

I’d love to make a few substitutions if I could, for instance I’d throw log in for Spear Goblins, and perhaps add a furnace for Skeletons, but the level 4 account did not have those unlocked yet lol. So I just went with that deck. Levels are shown in the image.

I played around with the deck for a while, made a few changes, and ended up with the one above. The deck worked AMAZINGLY well.

Normally, I’d just always set a Spear Goblin Hut behind my crown towers or in the middle to have a steady stream of chip damage. The Knight was a solid defensive card, while Musketeer could hide behind the swarm of units. By double Elixir, I could always have either 2 or 3 Huts at once.

This deck hard-counters Giant, Golem, and Lava Hound because of the swarm of Spear Goblins building up on the tank. The Knight is also great for taking out support troops. An overall BEAST deck.

Anyway, I started out at around 1100 in P.E.K.K.As Playhouse, won around 30 games straight with 1 draw, and ended up in Royal Arena!

Knight: Tanky troop great for defense, then counterpushes. I love using him to take out Musketeer, Wizard, Witch, Bomber, Archers, any glass cannons behind tanks. Also great for tanking a few Baby Dragon shots, then turning into a counterpush with  my stream of Spear Goblins behind.

Goblin Hut: The MVP of this deck. Provides a stream of damage, if left ignored, will deal around 600 damage at tourney standards. Behind a tank, it will easily take a tower or even three crown as a massive army builds up. On defense it is decent. Unsupported enemy Tanks will allow 10s of Spear Goblins to pile up, turning into a massive swarm your opponent must defend.

Unfortunately the Hut is not so strong against Fireball, Poison, Lightning, and high damage spells.

Goblin Barrel: Since this is essentially a chip damage deck, Goblin Barrel compliments it well. Since very few players have Zap in low Arenas (I’ve only faced a player with Zap once out of the thirty games I played), Goblin Barrel is a fantastic card. If you’re in a higher arena, I recommend place Goblin Barrel with Fireball or Rocket.

Skeletons/Skeleton Army: Ever since its recent buff to 4 Skeletons, the Skeleton card has been ridiculously strong. They can take out troops like Musketeer and mini P.E.K.K.A with tower support by themselves for a huge positive Elixir trade. Or they can lure a Minion horde to the other side of the arena. Extremely versatile, even a bit OP. Skeleton army, although more expensive, works as well.

Baby Dragon: I find this card very useful in the lower arenas due to the popularity of Skeleton Army and Minion horde. It’s pretty tanky, (sometimes I use Baby Dragon paired with a Goblin Barrel to take a tower), and has a slightly low but helpful DPS. Kind of like the knight in the sense it can tank a few shots from glass cannons like Musketeer.

Musketeer: This card has from the beginning been a pretty strong card (after she cost 5 Elixir), and will always be a strong card. She offers incredible damage, although weak to high damage spells. Great for a counterpush with knight tanking.

Minions: Since this deck lacks a proper Graveyard counter, Minions are good in this spot. They also work great against Lavaloon, Musketeer, Skeleton Army, or behind a Baby Dragon. Incredible DPS, just slightly low on HP. 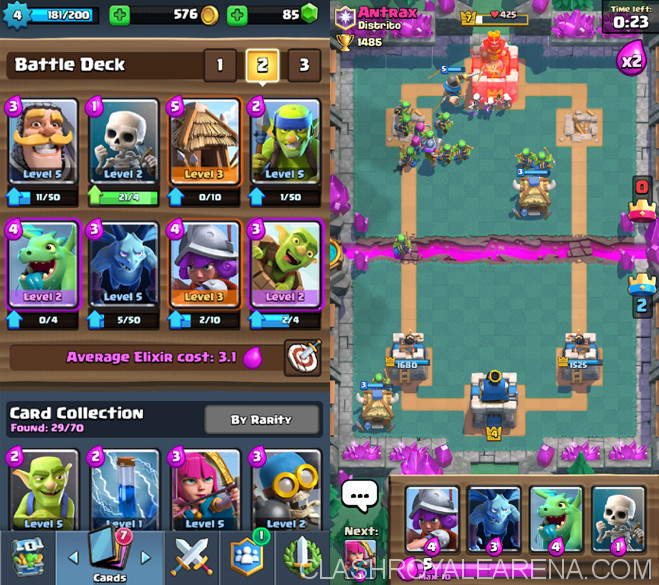 At the beginning, I always start with Spear Goblin Hut in the middle, or throw an early Goblin Barrel to get some damage off.

A Spear Goblin Hut is pretty much like an Elixir Collector. It gives you a passive building to bank your Elixir in. Your opponent must react or else lose Elixir/take damage. One in the middle is great. I try to cycle to a second one with the cheaper cards of this deck if opponent is unresponsive, or I will see what he plays and counter.

Goblin Hut can stop Hog Rider by itself, and Knight is great for taking out support troops.

Skeletons are great for stopping rushes like a Prince charge, etc.

This deck is great for REACTING to opponent pushes.

The defense is strong, and once you make a good Elixir trade, place another Hut in the back or throw a Goblin Barrel to translate into damage.

Once you get to double Elixir, You should do pretty well.

Normally you will have two or three Huts down at once, getting dozens of Spear Goblins on the map at once.

Your opponent will find himself grasping at Logs or Zaps to kill them, while only all the more spawn.

There is no perfect counter to a hut besides a building or spell.

Spear Goblins always get a throw of a spear onto an enemy troop no matter how far they are ranged (except Princess).

In the end, this deck is designed to wear your opponent out with the amount of Spear Goblins spawning.

Matches will often extend into overtime, but at a certain point your huts will stack so much that your opponent cannot respond anymore.

In overtime, due to this deck’s great defense, you may be able to Goblin Barrel/spell cycle your opponent to 0 HP.

How do I counter Princess?

This is the toughest troop to counter with this deck. She will snipe at your Spear Goblins (although constantly missing lol), while standing safely on her side of the map. If you find your self constantly encountering Princess (If you are in Royal Arena or higher), then sub in a Fireball or log to take care of her. Miner compliments this deck well too if you have him. Sub for Spear Goblins.

How do I counter Royal Giant?

RG is simple. Use Spear Goblin Hut to block him. Although he will get a few hits on your tower, by the time it takes out the hut you will have around 5 or 6 Spear Goblins that will get a ton of damage on your opponent if left ignored.

What if my Spear Goblins get oneshot?

Don’t worry about it. The goblins will still get one hit each off on a tower, however the tower takes them out faster. (So 2 or more Spear Goblins together will do less damage.) Yes you are at a disadvantage, but you can live with it. 60% of my games my opponent’s crown tower oneshots my level 5 Spear Goblins. You have to remember most higher level players in lower level arenas are not as skilled as handling their cards as you are. Be confident and you will win.

I hope this guide helped you out! For any questions, tips, or comments let me know!