Whats up guys! Zigge back another guide for a deck here on CRA. This is a F2P deck because many of you have been complaining about Legendaries and want a F2P deck. So here it is! This deck is for Arena 5 but it works very well in higher arenas too! Its also a hybrid deck so it can completely switch playstyle if you’d want to between Zap bait and Hog Rider. I’ll tell you some substitutions for this deck if you want to have a Legendary or two in it. 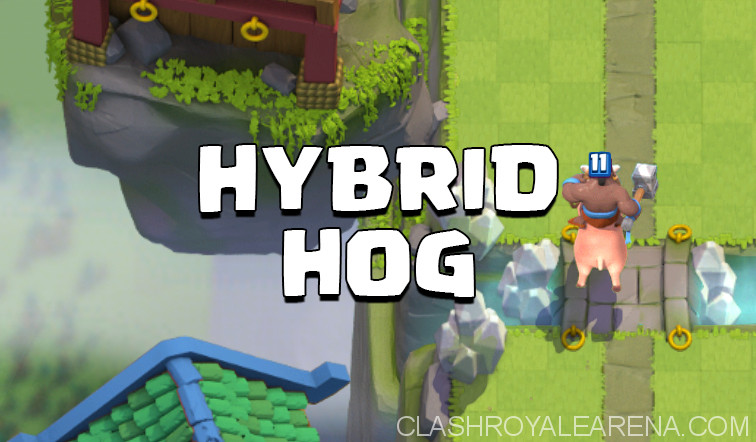 Hog Rider – One of the win conditions of this deck. You can actually get the Hog Rider to their tower if you throw a Goblin Barrel on their tower right before. When they see the Goblin Barrel, they will immediately be ready with a spell, but, then you send your Hog Rider right after and they will either have to switch card to a Hog Rider counter or wait and let your Goblin Barrel decimate their tower, even one stab from each goblin is a positive Elixir trade. This card can be replaced with Miner if you think that better but I personally think that Hog Rider is better.

Goblin Barrel – The other win condition of this deck. Use your other cards to bait out their Zap/Arrows/The Log and then use your Goblin Barrel with a Fireball or with the Hog as mentioned above. If you perform the combo right, either your Hog Rider will get to the tower or you Goblin Barrel will. This card can not be replaced due to it unique ability and the ability to only get counter by spells completely. Try to have your Goblin Barrel as high level as possible because it’s one of the main damage dealers.

Fire Spirits – One of the best splash damage dealing cards in the game. Very good against Barbarians and Horde. Use them with your Hog Rider to create deadly combos that will easily counter most of the counters to the Hog Rider. This card can be replaced with Mega Minion if you feel yourself weak to air. Level up your Fire Spirits as high as possible to clear out stuff better.
More: How to use Fire Spirits properly

Tombstone – One of the best defenses even after the nerf. Very good at countering Furnaces and similar stuff. Use it as soon as you have it. Very good against Hogs and Giants. Tombstone is extremely important in this deck because it mainly focuses offensively while the Tombstone can provide a strong defense. For that reason, try to level up your Tombstone as high as possible. This card can not be replaced due to its unique ability to be placed down early and work as a defensive building for the next 40 seconds.
More: Why Tombstone?

Fireball – One of the best spell cards in the game at the time writing this guide. Use it with your Goblin Barrel after you’ve baited out their Zap/Arrows/The Log to kill the troops they try to stop your Goblin Barrel with. Try to level up your Fireball as high as possible so it can kill their Musketeer or Wizard or whatever they put down. This cards can not be replaced due to its direct damage compared to Poison.

Minion Horde – Very weak card but is very good to bait our their spells so you can use your Goblin Barrel with your Hog Rider or Fireball. The level of this card doesn’t really matter that much. Just make sure that your minions don’t get two-shot by their tower. Use it alone only when you’re low on Elixir and your opponent has played a high Elixir card (6 Elixir+) in the back. This card can not be replaced due to its ability to easily bait a spell directly and if they don’t use a proper counter, their tower won’t have much health left.

Skeleton Army – Use it do distract any type of P.E.K.K.A or to Pig Push with your Hog Rider. But use it mostly on defense because it can easily get countered when used on offense. The Skeleton Army is one of the best defensive cards in the current Meta and there are so many others, that we really need a buff to offensive cards like Balloon, Golem etc. Anyways, Any level Skeleton Army will work for this deck because it dies to literally anything and they thing with Skeleton Army is just to bait a spell. For that reason, this card can not be replaced.

Zap – I was considering between Arrows and Zap but as we already have a direct spell that kill Princess, I decided to go with Zap. Fireball + Zap is also a cheaper combo to take out things such as Three Musketeers than Fireball + Arrows are. This card can be replaced with The Log and that’s strongly recommended if you have it.

This deck is quite hard to play but once you learn it, it’s very hard for your opponent to stop you. What you wanna do is try to learn their deck and playstyle, then bait out their counters to your Goblin Barrel, for example, if their counters are Zap and Poison, you use your Skeleton Army on defense and wait for them to zap it. Then you use your Minion Horde and let them poison them. Now you’re free to use your Goblin Barrel but you don’t just wanna gamble and use your Fireball at the same time. So what you’ll wanna do is send it alone, then you bait their spells again and then use your Fireball with it if their counter is Wizard or Musketeer etc.

So when are you gonna use your Hog Rider?

This is situational. Depending on what deck they’re using. If they counter your Goblin Barrel, Minion Horde and Skarmy without problem, you may have to use your Hog Rider as win condition, that’s what’s so good about this deck! If they counter one of them, you have the other.

When you play this deck it’s also very important too keep the Elixir up. If they get an Elixir advantage, you’re out. This deck also requires you to play on your rotation, meaning that you have a card that they don’t have a counter to or vice versa.

However, it is okay to do some negative Elixir trades against some cards, Princess is one of them, if you use The Log, this is no problem, but if you don’t, just fireball their Princess. Princess is such a hard counter to this deck so if you face many Princesses and not so many Musketeers or Wizards etc. you can actually switch Fireball for Arrows.

How do I play against air decks? They just arrows my Horde.

So, this can be quite tricky if you aren’t experienced playing Arrows/Zap/The Log bait before. You bait their Spells on defense when their Lava Hound reaches their Arena Tower. When they’ve waisted their Spells you’re free to play your Horde on defense. And if they decide to save their Arrows for offense, you’ll have your Goblin Barrel and Skarmy on offense. When you learn how play against air, it’s quite easy.

NOTE: This deck is very weak to Baby Dragon, try to also bait him out on defense

Order of cards you wanna start with;

That’s it for my guide, hope you all have a good day, comment if you need any help or advice and peace out! 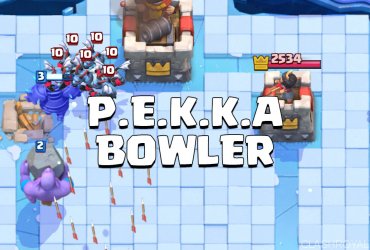 Hello Clashers! KairosTime here, with a powerful P.E.K.K.A Bowler deck that has brought me huge success in my most recent tournaments. It specializes in fast 3 crown victories which makes … 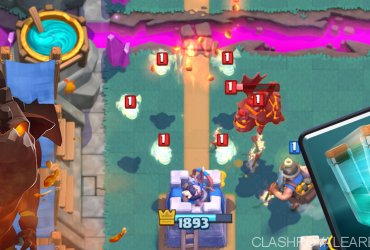