Heya Lolman here coming back with another guide!

This time I will be shifting a little off the meta which is ruled by P.E.K.K.As to a Giant deck that I believe is very very strong. This deck is so strong in both tournament play and ladder!

This deck is also very strong vs P.E.K.K.A decks (yes you heard me right!). A Giant deck that can quite Easily beat P.E.K.K.A decks and 3 Musketeers along with most other meta decks right now.

It’s not a new deck by any mean, it’s a deck that’s been strong for a long time now… 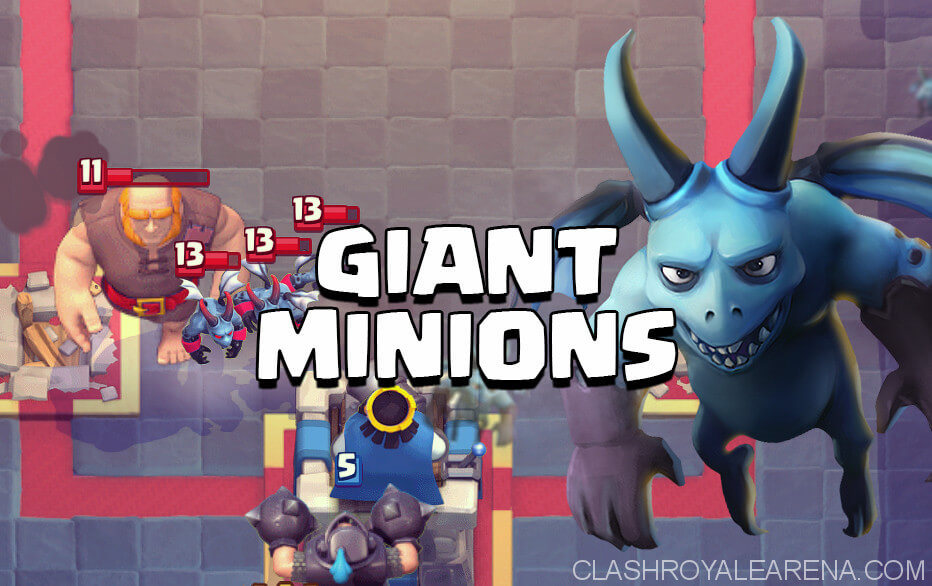 Giant – Main win condition! However, it is not the only way you can get damage onto your opponents towers.

The Giant is a very strong win condition from early Arenas all the way to the very very top. Costing only 5 Elixir for more HP than a Lava Hound (not counting Pups) and the new Mega Knight!

He is always a great punishment, which can take down a whole Tower If ignored. However with this deck, rather than cycling Giants, ideally you want to counterpush with him.

Defend a Hog with a Musket? Then place your Giant right in front and prepare your spells.

Miner – The secondary win condition of the deck.

He is the card you will lean on in certain match-ups to do the damage or to tank for the damage dealers if your opponent just keeps killing your Giant every single time. This can be the case when you play vs P.E.K.K.A decks.

Also Miner should be used to deal with Elixir Collectors as well!

Say your opponent pumps up? Place down Giant + Minions and then use Miner for the Pump. It will be VERY difficult to answer that 11 Elixir push with only 4 Elixir left right after placing the Collector down. This will result in a destroyed Collector and a lot of damage on the Tower.

Late game I will rely on Miner + Fireball cycle to take down a Tower if I am not able to take it down in early game.

Musketeer – Now why Musket and not E-wiz?

Musket has more DPS than the Electro Wizard and she has amazing attack range as well. I really like how she 1 shots Goblins.

Personally, I really really like her. She was one of the very first cards I constantly used on ladder.

I prefer having her in this deck over the Electro Wizard. This makes the deck far more free to play friendly as well.

Minions – You could say this deck has a spell bait element. Musket, Minions, Minion Horde. All are Fireball/Poison bait.

Ideally, you want to bait out the spells with this card.

Vs Lavaloon, use the Minions on the Balloon to draw out the Arrows before dropping your Minion Horde.

Also say you don’t have Giant in hand when someone pumps up? You can use Minions in a quick Miner+ Minions push to snipe out the Pump while drawing a reaction to both Minions and Miner. Potentially getting a value Fireball in.

If they are careless with spells, Miner + Horde or Giant + Horde are the ultimate punishment push.

They are also great at taking down tanks like Golem, p.e.k.k.a, Giant etc as well! Especially if your opponent has no splash damagers. If that is the case you can wait for them to lock onto the Tower or go with the tank and spank strategy with troops.

Fireball – This card is your high direct damage spell!

Ideally, you don’t want to Fireball Collectors until you’re sure that you are not facing 3 Musketeers. Rust with Giant and use Miner on the Pump.

If you face Golem, Fireball away the Collector. It’s not that hard to defend a Golem push with Minion Horde, Minions and Musket. Ideally, Use Horde to deal with the Golem+ Night Witch and use Musketeer for the Baby Dragon. 1v1 Musket destroys the Baby Dragon. You can use Minions to help if you can afford them and then counterpush with a Giant. 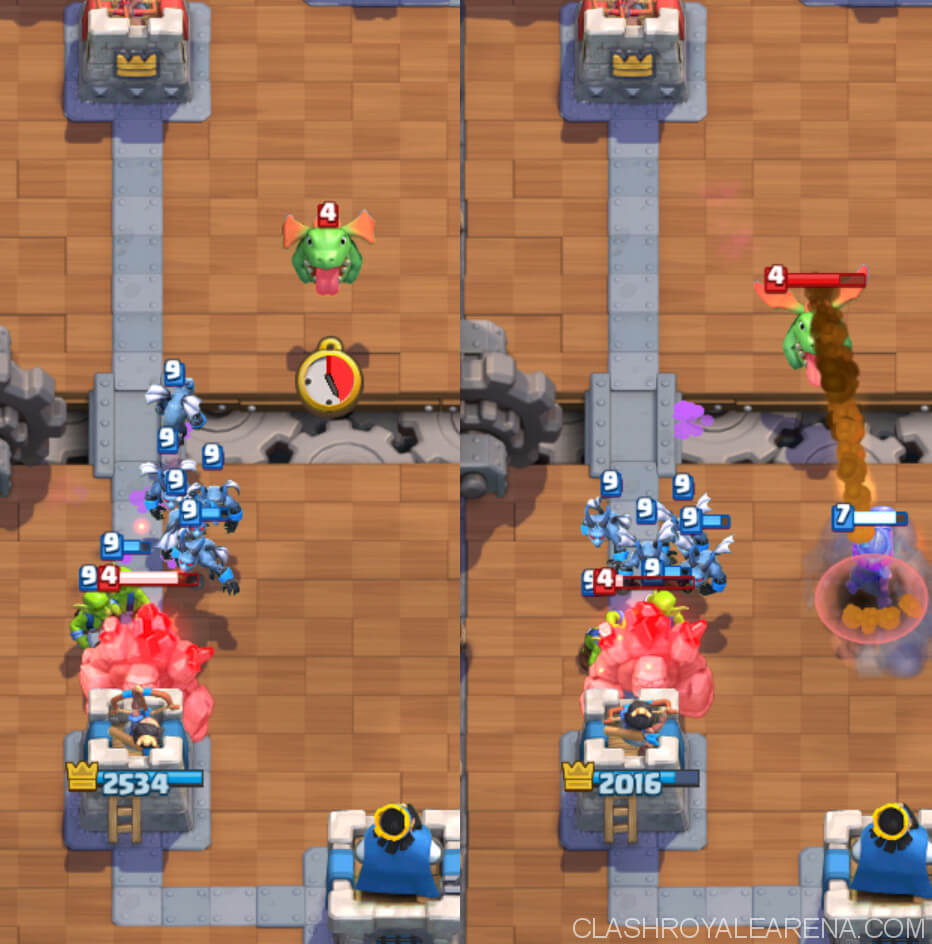 Musket tanking for squishy troops and also would be used on the counterpush.

Log- As always, this card is self explanatory. Not much is needed to be said.

Ground kiting unit as well as distraction for cards like Bandit. They have a very high DPS for their cost and they are zap resistant. They can easily shuts down cards like Giant, Hog etc with relative easily because of their high DPS.

They can also be used to kite Minion Horde as well similar to Skeles and provide a lot of defensive value. 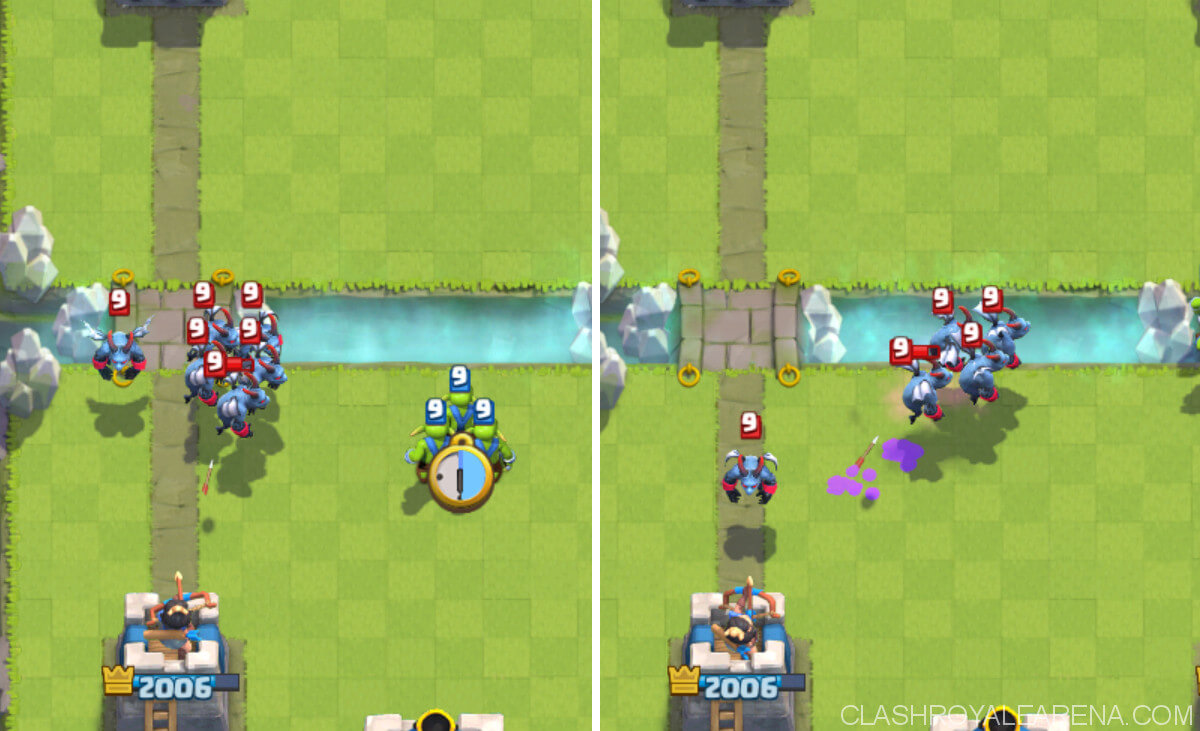 I don’t play this deck aggressively during this time but you will want to amp things up later on.

I would like to maybe play Minions at the back, Goblins at the bridge or Musket at the back first. Some passive move that isn’t really a huge investment.

By doing this, If say they make a risky move, you will still be able to punish them for it and your push will not get hard countered from the get-go. Thus, you won’t lose your Tower on a counterpush (Can be true when playing vs P.E.K.K.A decks).

So early on, try to play some low risk cycle cards and identify what you are playing against in order to figure out how you deal with it.

Once you have a general idea of what you are facing, you will need to adapt accordingly.

Save cards like Log for a Goblin Barrel, Minions for Inferno Tower, Goblins for a Bandit etc. Sometimes you can even use Giant to kite the P.E.K.K.A while taking him off with Minions.

Try to only make predictions if you are sure that they will drop something. This should only be done if you have a reasonable amount of skill in paying attention to your opponent’s card rotation and cycle.

I would only do aggressive Giant once I’ve outcycled my opponent’s P.E.K.K.A etc.

So don’t overcommit and play it safe. Getting whatever damage you can.

If they make a mistake then pounce on it and punish them for it. This is mainly the case vs P.E.K.K.A decks as mentioned above. This deck has a LOT of DPS so going other lane is fine if you catch them at a moment like that.

Punishing the P.E.K.K.A at the back.

Around now you will ideally cycle Giants.

Unlike Golems which cost 8 Elixir, don’t hesitate to place Giant at the bridge depending on the situation.

This will all depend on the match-up.

If vs Inferno Tower in Log bait, you will need to Giant in the back, save Log for Princess and then use Minions for Inferno. Minions, Minion Horde, Musket will shred through Knight and Goblin Gang as well. Just don’t give value for defensive Rocket though like Giant+ Musket+ Horde.

So cycle as many Giants as you can without giving opponent value and play smart.

Get value from Fireballs as well.

If it’s a late game and you have opponents Tower below about 700 HP. Then you can win by cycling Miner + fireballs.

I will list out some of the most popular match-ups you are likely to face during this meta and how you can adapt your playstyle in order to beat it.

Typically you will need to use your Minion Horde and Minions to your advantage.

Kill the P.E.K.K.A on their side if you use Giant and they use P.E.K.K.A to counter it. That is the best way to handle this deck.

They will lack air splash in deck and you will use that to your advantage with 2 high DPS squishy units to take out their beefy cards.

1v1 E-wiz is horrible vs Minion Horde, and Goblins. You can easily shut down their Hog. Don’t give them Lightning value as well!

You will find that this is actually one of the easiest match-ups to beat.

You may need to also lean at using the deck as a Miner chip cycle as well. If they run Poison Zap it can be VERY troublesome but is still beatable if you play smart.

All about utilizing your cards!

Ideally you will answer the Goblin Barrel with Minions, or Horde etc and then counterpush. Use Log on the Princess and use Minions/Horde to distract the Inferno Tower. That should be GG.

In the 1-0 situation, you have a very big advantage as well! Because Inferno Tower is far worse in these kinds of situations. 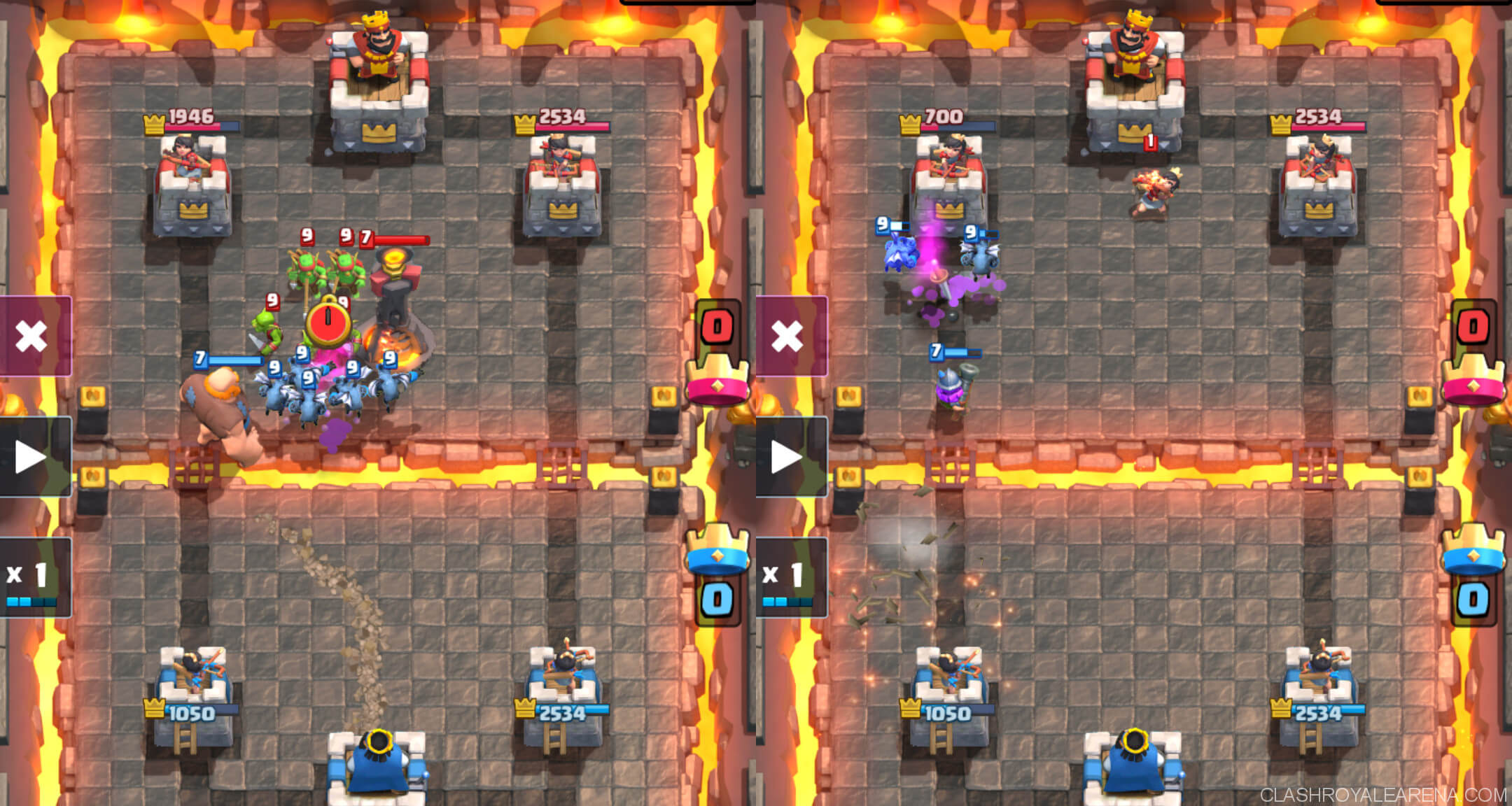 Using Inferno Tower distractions can end up with positive results for you.

Also one thing I really enjoy doing is if they play Princess at bridge, I immediately use Minion Horde then Miner behind the Tower. That results in massive Tower damage for you, assuming hey aren’t cautious and play the Princess in response the Horde for an example.

Punish the Collectors and don’t let them build up huge pushes.

Ideally, you should be ahead by a Tower before the x2 Elixir time. Then if they go for the same lane as Tower is missing, you would go hard on other lane.

All you need is 5 Elixir to kill the Golem fast (Minions + Goblins or Minion Horde.) Musket can tank the Baby Dragon or you can sacrifice a Giant while your troops kill the Golem.

Be careful at placing Horde so they don’t die to death explosion. It’s very hard for them to get Lightning value while playing against this deck.

Minion Horde, Minion etc can stop their Ram pushes. You shouldn’t have any trouble vs this kind of deck.

Without P.E.K.K.A, Hog decks are still quite easy to beat. If they switch lanes, utilize Musketeers range and place in centre to snipe opposite lane and support your tank.

Get value from Fireballs, bait out their spells and punish. It’s not too hard because these decks don’t have a lot of air defense so a typical Giant, Musket, Minions push can draw out a Fireball, giving you a green light to Minion Horde for an example.

Giant counters X-Bow and you got 2x Minions for Inferno Tower/ Dragon.

Musket can snipe from a distance too. You can also take care of it with a Miner to Tower, then Fireball Tower+ X-Bow then Log back troops + X-Bow and Tower.

Mitigating damage and Miner will tank a lot as well!

That’s all the match-ups I got for you guys today. I think I covered most there is to.

If you got questions leave them down below.

This is a really strong deck, and I believe it is especially so in the current meta with Poison going out of the meta a little with the fall of Graveyard.

Give it a try, and best of luck! 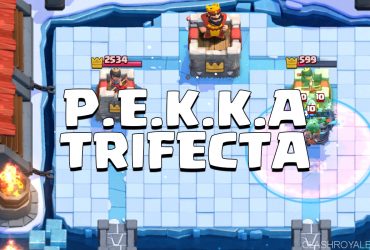 This P.E.K.K.A Trifecta is such a very funny and very strong deck. I was testing it yesterday and got 10 wins in a row in Legendary Arena. Let’s take a … 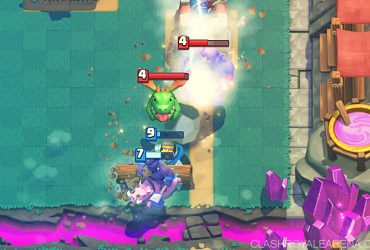 Hey guys it AxureFangz here! I will be introducing the “Hog Splashnado “to you guys today. I have completely made this deck from some top players and with some card …