This is a guide for new and experienced players alike and will help you get better at using understanding how Hybrid Decks work, and how to build them.

Check out this guide for some basic ideas on Hybrid Decks. 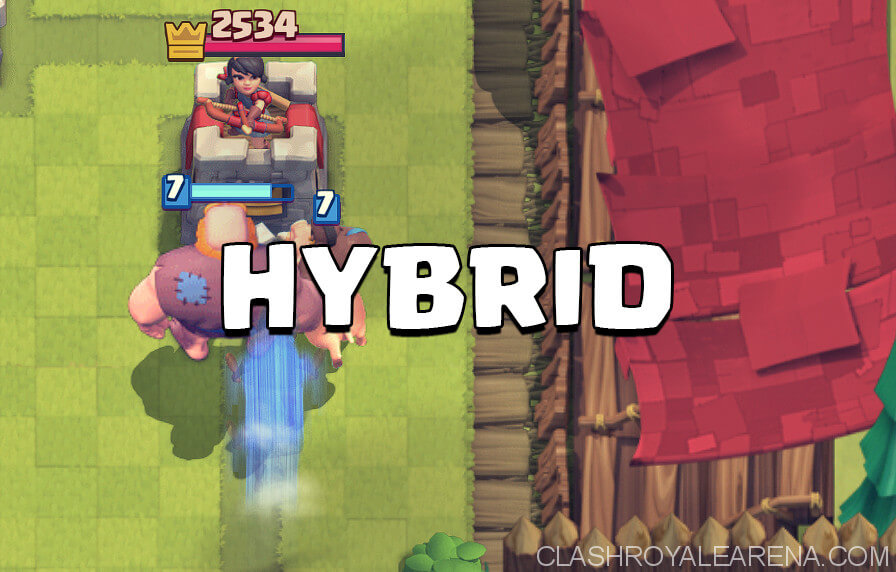 Before we move on, I think that Hybrid Decks are some of the strongest decks in the game, but they require very skilled deck building and players to unlock their full potential. This guide will help you do just that!

In this guide, we’ll focus on these key topics:

What Is Hybrid Deck? 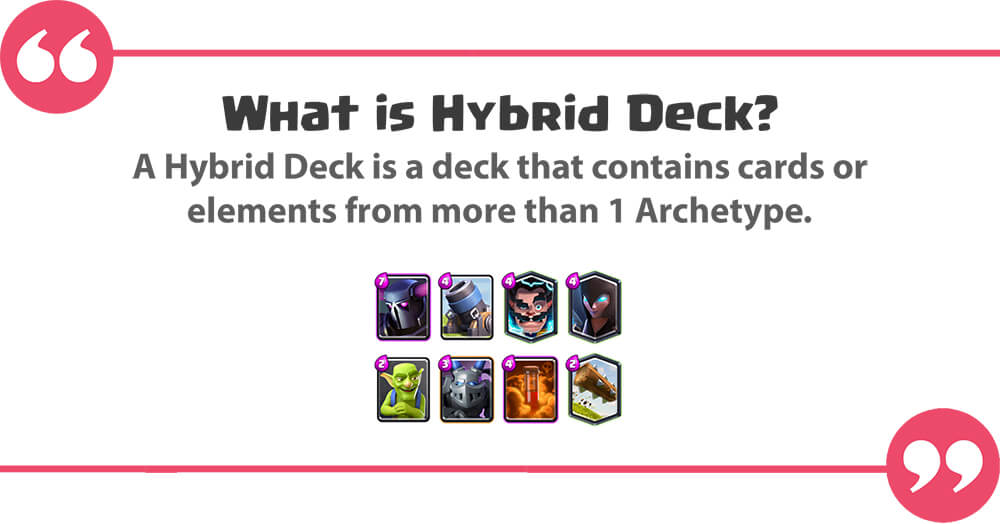 The 3 Primary Deck Archetypes are Control, Beatdown and Siege.

Each of these have their own strengths and weaknesses as well as deck types that they are Strong or Weak against.

Here’s a brief refresher on each of these Archetypes if you’d like it. (Click the links above for the complete guide on them).

A Hybrid Deck is a deck that contains cards or elements from more than 1 Archetype. For example, you could make a deck that includes the P.E.K.K.A and the Battle Ram for a Beatdown Control Hybrid deck.

Note: Hybrid Decks function a little differently than Double Decks or decks that have more than 1 win condition from the same Archetype. (Miner + Hog would be a Double Control Deck) However, Hybrid Deck building principles will help with Double Deck building as well because a lot of the principles are the same.

Although Hybrid decks break free from a lot of the rules that are associated with the three Archetypes, that doesn’t mean that they’re easier to play or build.

In fact, there are lots of Cons to Hybrid Decks:

An incorrectly built Hybrid deck will often times contain the weaknesses of both it’s archetypes without all of the strengths.

In order to build the best Hybrid deck, you’ll want to understand how the 3 types of Hybrid Decks work as well. Or you could just throw a bunch of cards together and hope to get lucky with an all star Hybrid deck!

Although Hybrid decks can be extremely successful, playing a Hybrid deck requires a lot of skill and understanding of the game.

Because it gives you two different functioning Win Conditions, it means that if you make the wrong choice in the given situation, it’ll often cost you a tower.

Also, only playing one of the archetypes leads to a 3-card disadvantage which can limit your options.

Note: Please let me know if you would like a guide on how to Play Hybrid Decks in the future 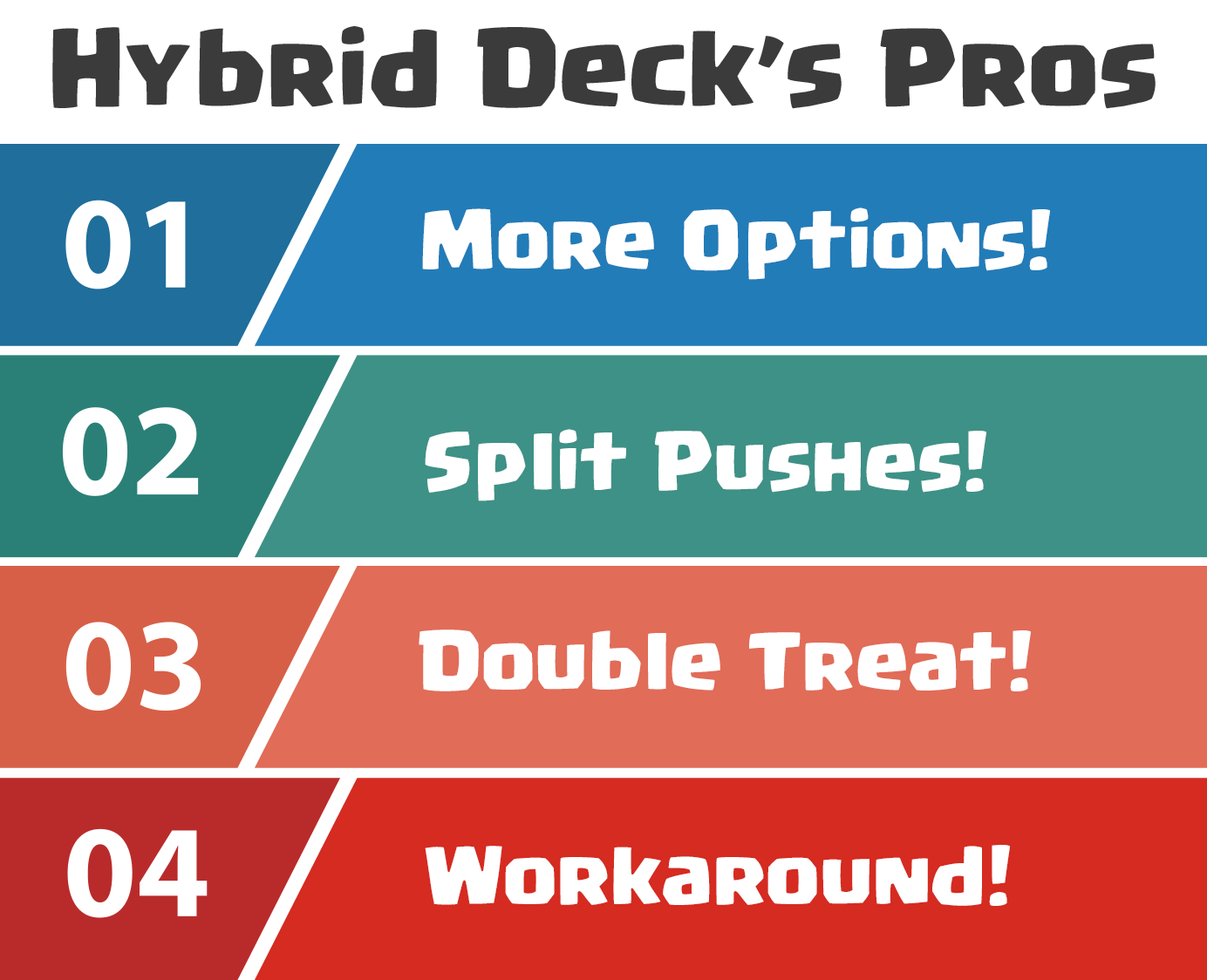 If you’re a skilled player and you think you have what it takes to make and play a Strong Hybrid Deck, there are a lot of reasons why Hybrid Decks are an excellent choice.

It’s a High-Skill, High-Reward deck type so if you can pull it off, you’ll have a lot of advantages:

Although having more options can be a curse if you make the wrong choice, a skilled player will always make the right choice, which means that they’ll have the advantage over any deck archetype.

One example of this is a Control-Beatdown Hybrid playing primarily a Control style to counter a Beatdown deck so he always has the advantage.

Having a Push with 1 Archetype going down one lane, while the other Archetype push is going down the other can really put your opponent into a tough spot since most people are accustomed to defending one type at a time.

This requires you have a big advantage, but is extremely rewarding if you can pull it off.

Some Hybrid decks use 2 Win Conditions that are similar and require similar counters to get rid of them. These “Double Threat” decks allow you to get past defenses once your opponent’s 1 or 2 counters are already used up, so your second Win Condition can get in on the Tower.

Other Hybrid decks use 2 Win Conditions that are different and require different counters. If the opponent only has the counters for 1 of them, the other Win Condition can make it’s way to the tower for some easy damage.

In order for us to talk about Hybrid Deck Building, it’s important to label each win condition as either Offensive or Defensive.


I will label them according to how easily it is for that Win Condition to provide offense or defense.

Keep it in mind that some Win Conditions can be used for both Offense and Defense, but fit better into one or the other.

I’ve added the Archetypes to these cards in parentheses. Bear in mind that some cards could be considered multiple depending on the user’s play style. However, these Archetypes are labeled according to the following definitions:

These are Win Conditions that either only target defenses, or that tend to provide more value on offense than defense.

These are Win Conditions that offer more value on Defense and typically require a lot of support to deal damage to the enemy tower, with the exception of the Rocket.

Note: Some may even not consider some of these Win Conditions because they offer more value on Defense than Offense (Ex. Giant Skeleton or Elite Barbarians). These cards typically require a deck built around them to make them work as a Win Condition.

Now that we have the Fundamentals down, we can talk about the 3 types of Hybrid Decks and how to build them:

Double Offense Hybrid Decks offer two Win Conditions that are Offensive and as such, as long as you can stay on the offense, these decks are very difficult to defend against. However, they do tend to struggle on Defense so it’s important to build the deck around allowing you to apply constant pressure.

Jason’s Deck was the deck to win the first Clash Royale Competitive Championship! It utilized both the Giant and the Hog Rider to make a Beatdown-Control Double Offense Hybrid Deck

One important aspect to recognize while building Double Offense decks is that they really struggle to defend if you have a bad hand.

As such, you want to ask yourself what the worst hand would be if your opponent were to drop a threat that needed to be dealt with immediately.

With the example of the Jason deck, this would be a Hog Rider, Giant, Arrows, and Elixir Collector. With this hand, you wouldn’t be able to defend.

Make sure you build a deck that doesn’t have any of these hands or you’ll find yourself in trouble.

Double Defense Hybrid Decks contain 2 Defensive Win Conditions. Because of this, they make it difficult for your opponent to deal damage to your tower, but they can struggle on offense.

These decks can do well on the Ladder because of their ability to pull a draw if they find themselves in an unfavorable matchup.

This Double Defense Beatdown-Siege deck uses the PEKKA and the Mortar to support each other, and make it tough for the opponent to deal tower damage

Note: Make sure you have at least 1 damage dealing Spell to help finish off towers. Anything 4+ elixir should work great since Double Defense Hybrids struggle on offense.

As such, you don’t have to worry nearly as much about making sure that you have to cover Defense with Offensive power, or vice versa.

This Balanced Hybrid Deck is a variation of the one I made 3 months ago and won 14 Challenges in a row with, about half of which were Grand Challenges

Thanks so much for reading this guide! If you’re interested in learning more, make sure to subscribe to my YouTube Channel so you can be the first to see my guides. If you have any questions, feel free to leave them as comments on my video and I’ll get back to you as soon as I can!

Want to be a part of a community who love Clash Royale as much as you do? We probably have what you’re looking for in the Kairos Kingdom Community Discord Server! Join Today! 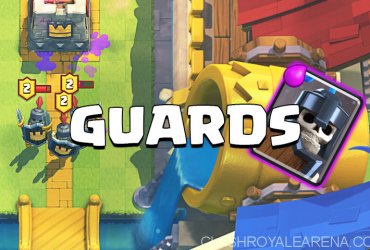 Guards are always one of the best defensive units in Clash Royale due to their good DpS, low Elixir cost and especially their shields! They are excellent in tons of … 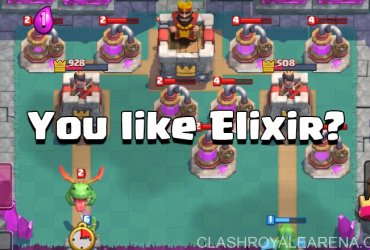 Hello my friends, in this guide, we are going to discuss about the Elixir Advantage, the most important factor in Clash Royale. I will also mention couples of things you …