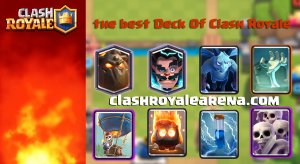 Hey! I’m sure you’ve seen a fair share of Lavaloon decks out there, but this one is probably the best:

Seriously! Go ahead, check it out on deck check websites. It ranks pretty high for all categories.

So anyway, this thing went through a lot of changes. I started out with this deck:

This deck is great as well, but then I got E-Wiz and my Mega minion was pretty low level already, so I swapped E-Wiz in. (I tried subbing out Zap for a Log, but that sucked, obviously, because Log has no air defense). I got Log and E-Wiz out of two king’s legendary chests I got for the lunar new year celebration. This deck ROCKETED me up to Jungle arena, (Then, of course, the ever-annoying Matchmaking system lost me down to 2350 trophies. Since then I’ve got myself back up to Jungle arena).

This deck can handle most decks I’m put up against, The no-skill decks, the High on Legendary decks, EVERYTHING got thrown at me and I managed to win against all of them. The system pairs me up usually with three people with a similar theme: Wizard and Inferno Dragon, for example. I’ll put down Lava hound and E-Wiz and all of his main counters are toast! Then, when Clash Royale’s 2nd Anniversary rolled around, I got Miner out of a magical chest. That was the time I realized I could make this deck REALLY good. Lava hound can tank for miner who deals out a LOT of damage, OR, if miner tanks for balloon, That tower is dead if that push goes uncountered. It’s unlikely that it will go uncountered, but it still makes your opponent spend elixir, which is a great upper hand to have. If you don’t have Miner or you want another counter for cards, you can use Fire Spirits who go great with both balloon or Lava hound, (better with Lava hound). Why? because in arenas 6-8 Minion Horde is SO overused, and fire spirits demolish minion horde, allowing the Lava hound to deal heavy damage. If they use Wizard, the no. 2 counter, your fire spirits get the wiz’s health down to one-shot-from-a-lava-pup level, and then your lava pups can deal some nice damage. 🙂

So, in conclusion, This deck is a great one.

Go ahead. Try it out!