In this guide, I am going to show you the easiest way to push to Arena 6. The deck in this guide has a very high win-rate against most other Decks that I have ever meet. Also, in this guide, I will show you how to easily counter those Decks. This deck was given by JesusSlark from Thailand. Currently he is at rank 13th in Thailand and he just level 6.

And this is my Deck: 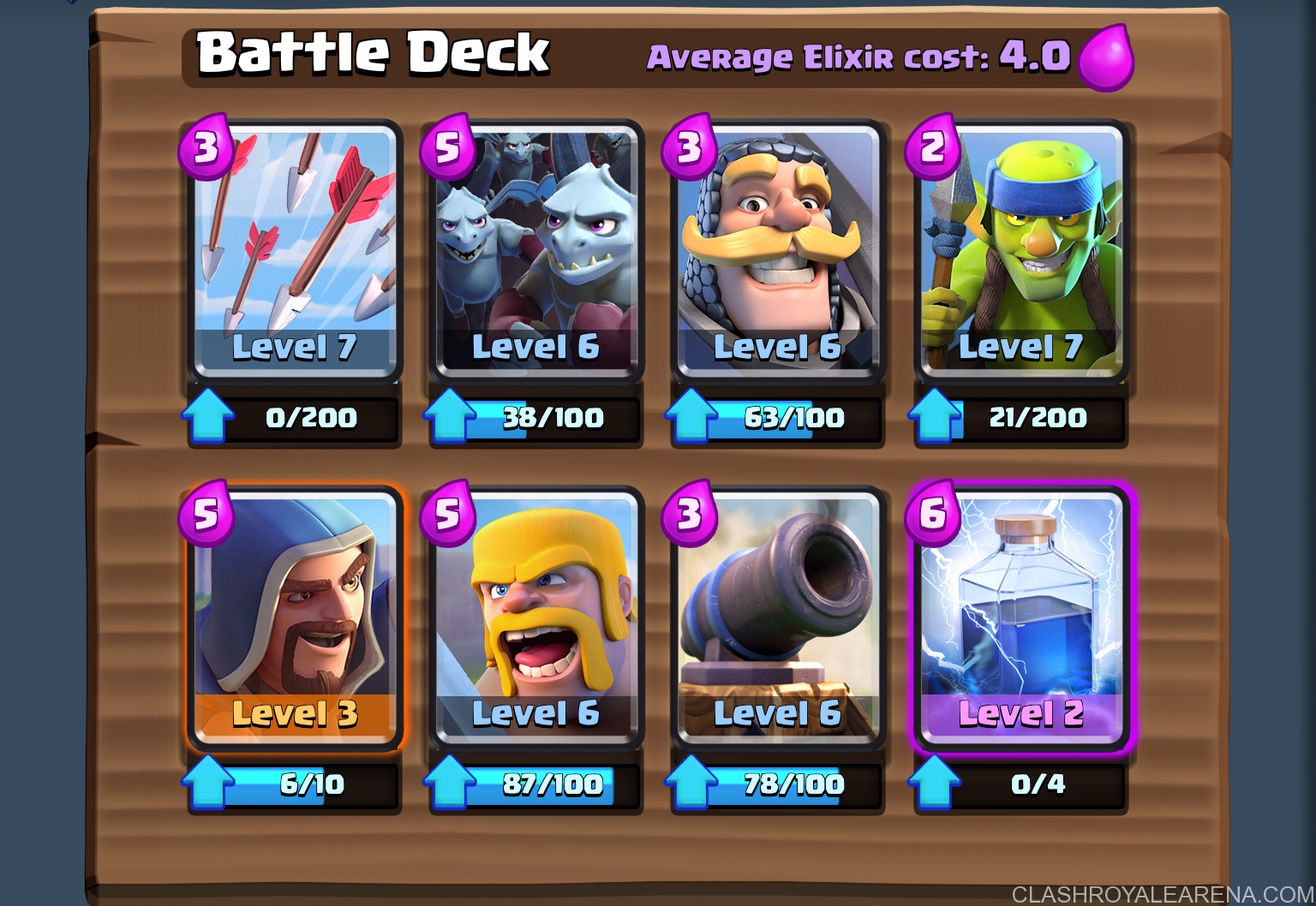 I usually start the game with either a Cannon or the Spear Goblins card (drop the card when your Elixir bar hits 10. By doing this, your opponent will always drop high Elixir cards first. You can easily counter most cards with the elixir advantage. Just don’t rush the game, slowly whittle his towers and you can win most the games.

Balloon + Freeze: This deck building is extremely strong against Balloon + Freeze combo. I can’t remember the last time when I lost my towers because of this combo. Just make sure your Cannon is placed at the middle and the enemy Balloon will always get distracted to by it. Then, drop the Spear Goblins or the Wizard to quickly take the Balloon down. I always drop the Spear Goblins and Wizard first to bait out the Free Spell. Once the opponent drops the Freeze Spell, you cna use the Minion Horde card and start playing counter attack. Most of the time, the opponent use 9 Elixirs for nothing and you can easily get a free tower. Also, If you don’t have the Cannon to distract the Balloon, you should drop your Minion Horde card as soon as possible otherwise your Tower will be completely toasted. Don’t worry If the attacker uses the Arrows, your Minions always can deal lots of damage before they die and your Goblins/Wizard can finish the job.

Hut Deck Building: This is another popular deck building that we can see everyday. Firstly, always remember to drop your cannon at the middle then drop the Knight or the Spear Goblins on the side which is being pushed. Wait until the opponent drops 2 Huts (Barbarian Hut and Goblin Hut for example) then use the Lightning Spell on them (of course don’t target the King’s Tower unless you want to take additional damage). With Arrow, Barbarians, Wizard and Minion Horde, you can easily defend your Towers against hordes of enemy troops. Also, remember to spread your troops out so they will not be killed by 1 AOE Spell. Keep lightning their Towers and repeat that, you will have an easy win with the Lightning Spell.

Giant/Golem/P.E.K.K.A/Giant Skeleton Deck: This type of deck is also very easy to counter. Drop your Cannon at the middle of the side where the tanky units is targeting. The tanky troop will always get followed by high damage units such as the Witch/Musketeer/Bomber, right? Simply drop your Knight/Barbarians on the top of them, then, use Minion Horde or Spear Goblins to deal with the tanker. After this, you can easily launch your counter attack.

X-Bow: Even the X-Bow is pretty gotten nerf after the update but there are still lots of players using it. As I can see, a common type of this deck is using 1 defensing building such as the Inferno Tower or the Tombstone to protect the X-Bow. They usually place the Inferno Tower at starting so you can simply drop the Lightning Spell to take it off. I always do that with the Inferno because I don’t know If they have the X-Bow or not. Then, deploy the Barbarians/Knight and followed by a high damage ranged troop such as Spear Goblins/Wizard/Minions. Now that you know the opponent has the X-Bow. You always should stay high on Elixir to counter the X-Bow. Once the opponent drops the X-Bow, save 1 Lightning Spell to counter it. A level 2 Lightning Spell can leave the X-Bow with about 10-25% HP, after that, you can use your Knight to distract the X-Bow and use your Spear Goblins or the Minion Horde to take it down.
Another way to deal with the X-Bow is to drop Barbarians followed up with Wizards or Minion Horde.

Freeze+Hog/Prince Decks: Drop the Cannon at first once again, it is one of the game winning cards. Drop it in the middle and the enemy Hog and Prince come charging right for it. You can easily counter them by dropping the Spear Goblins/Knight to help your Cannon take them down faster. He just wasted 8 Elixirs for just a 3 Elixir Cannon. Such a nice trade!

Thank you very much for reading! Hope you can push to Arena 6 as soon as possible with this Deck!