How to make a golem Deck! – Clash Royale Arena

As an avid thinker of golem deck, I have recently found a lot of golem decks found in this game. There are lots of golem deck. And I like all of it! I enjoy playing every golem deck in this game. But the most I enjoy is the deck that I created myself. It has been very steady since when I was changing from giant to golem. Without further ado, let’s clear up all of the roles. I will also make sure that this deck can be as versatile as possible without losing its main key component for the deck.

Before posting this guide. You may ask. What is the purpose of making this guide like this? The reasoning is because there is still a lot of people, especially in lower arenas that cant makes a good golem deck and usually have some noticeable weakness. I want to make this guide so that people understand how to make a golem deck that works.

Note: This is a layout for a normal golem beatdown deck. There is also a meta golem fireball bait deck that rocks, and it cant follow this main format.

So, I present you this ultimate layout.

Golem ( Tank)
Nothing may fear the golem. The solid rock card that I have always adored. You may want to place this card when you know you are some elixirs ahead or when it is at double elixir. Never place this card in the middle except if you are running out of time or if you cannot defend against their rusher. Therefore, deploying golem in the center is acceptable in one of those two scenarios.

Always play this card when you are ready. Playing this card as the first move can be very punishing and it is very unrecommended.

Tank Killer / Slayer
To make a golem push comes true. You will need a troop that can deal high DPS to destroy any upcoming tower slayer ( Example Hog, Giant, RG, or even Golem). Always spare this card when it is needed the most. For example: When you know the opponent has hog and knight. You will never want to defend the knight with your tank killer. Or otherwise, you can’t protect properly against their hog.

Note: usually a tank killer can’t become a good defender. For example is that inferno dragon cannot defend properly against a hog rider. You may want another troop that can protect against hog rider.

Troops that can deal with swarms / Splashers
Another card that is needed to make a good deck. I agree that the role of splasher is not a main key component but is still required. I have recently seen that a golem deck that contains poison spell sometimes don’t have splasher in the deck. In this case, I believe it is okay because poison IMO can pretty much deal with all the swarms.

However, having a splasher is still recommended because you may want to have it when you are facing against a swarm based cards.

Air Defender / Aerial
Usually, there is a lot of decks that have very weak air defense. It is because their main strategy is to do tower-trade or just rushing. But golem decks need to have a good defense against air. Simply because some of it cannot base race against the air-based deck. (What is the base race? It is a common phrase in tower defense game, usually in Dota 2. Where the player ignores to kill each other troops. But to just dish out damage as fast as they can. Golem is a beatdown deck. Meaning that you should be able to beat down their troop combination too. So against lavaloon decks, we need to have troops to deal with those.

Cheap nabs or Distractions / Distractor / Runner
One last thing that is also needed is the importance of having a cycle card. You know how important is cycle even though the deck we are using is classified as heavy deck. Usually, this cycle card also serves as a good defensive card.

For decks that have a lot of troops. It can also be an additional troop. Sometimes I can generalize every deck. But still, we must have something that can rate the deck is compatible or not. Cheap spells are needed as a cycle and also how can you deal with swarms. Usually, you will either use zap or log. But as this is a golem deck that usually suffer from an inferno. Zap is highly recommended.

When golem dies, usually the tower will reset their target from the golem into the support troops. It happens because the golemite didn’t pop instantly, there is a very little amount of time when golem explodes and split into 2 golemites. So, in case of this, zap is very useful not to hit your night witch, but to reset it and just hit your golemites.

Secondary spells
Secondary spells can be an optional choice for some golem decks. Especially there is only one spell that is used by golem 3m decks. It is because they need their swarms better than they need a big spell so picking their bait cards is much more important to pick swarms than needing a secondary spell.

The most popular secondary spells that the stats show is poison. It is because of the area denial it gives that no other card in this game has. It can also be a tornado, proven best when you have a good splasher to be combo-ed with.

(VERSATILE) Elixir collector/Troop/ 3rd Spell/ Cycle ( Can be anything)
This is the last slot that pretty much can be used for different uses. You can have elixir collector if you want to become more passive at the first 2 minutes. You can have an additional troop to aid in your pushes. Also in some decks, there can be 3 spells in the game. Usually, one of it is a tornado and can be accepted.

Usually what contains in this slot is the card that can minimize the weaknesses of the deck. For example, if the deck lacks aerial support. This slot is to add more air defender.

Some notes: Usually when golem decks have lightning, they will prefer to use log/arrow instead of zap.

Let’s start with my main deck.

Pretty solid for this kind of method. My weaknesses are the lack of tower damaging spell, but I don’t see that as a problem because usually, my golem will get a tower down without leaving any health on the tower.

So this is the example.

This format is created and hopefully there are a lot of new players can begin to make their beast golem deck.

– Not every golem deck should have a splasher usually they have poison to fight with that or having a 3rd spell to deal with it.

– This format cannot be used to make golem 3m deck. Because the way to play the deck itself is different from each deck

– The baby dragon is one of the best cards to be accompanied with golem because it is a semi-tanky card that is usually the only support troop that can survive lightning. Therefore this baby dragon is good to be played.

-Last but not least, the intention for me doing this is so that there is some kind of format to make a golem deck that can be used well. Also a general knowledge of everyone about how can a golem deck can be created.

That’s all for me. Thanks for all of you who have read through all this guide. Peace Out.Out. Thank you. 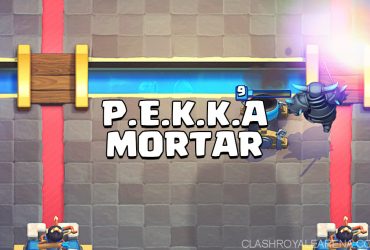 Hey everyone it’s SgtBananaPants back again with my second guide about an amazing off-meta deck, the P.E.K.K.A Mortar! P.E.K.K.A Mortar Deck for Arena 9+ Background: Now those who read my …