Hello, Unlucky Guy (In game TackTickz) here! I want to share this deck that helped me get to Royal Arena (2000+ trophies). Ever wanted a good Hog deck that can pretty much counter anything? Well this deck must be for you! Fit with only 1 Epic (from Bone Pit), 3 Rares, and 4 Commons this deck is very easy to create. Through out 25 total games, I had 19 wins, 3 loses (so sad), and 3 draws. That is a pretty good win:loss ratio. 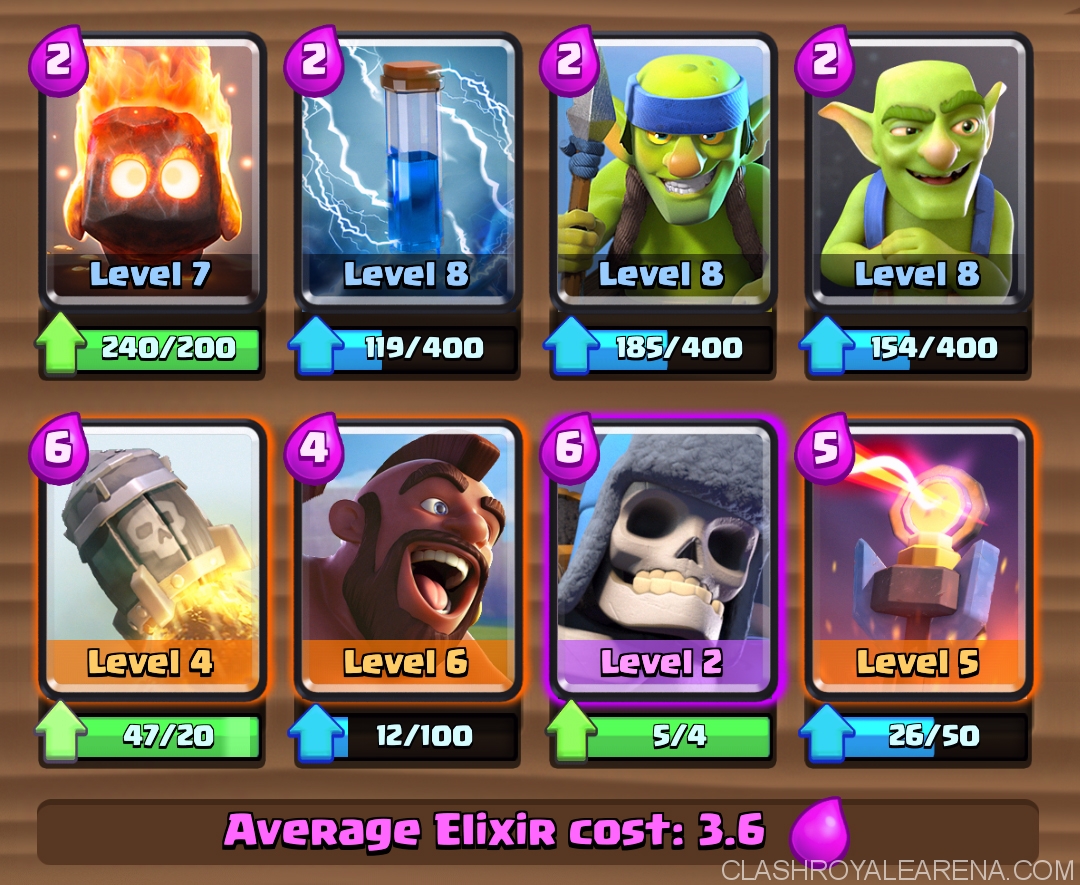 Zap (Ideal Level- 6+): Zap is definitely one of my favorite damage spells in the game so far. Many people would swap this card out for arrows due to arrows having the ability to one shot minions and having a bigger tile radius. Doing it in this deck would just be plain wrong, because arrows are only a defensive card, but zap is both a defensive and offensive card. Having the ability to stun towers and enemies for 1 second gives this card a more versatile look compared to arrows. Also, the stun actually changes aggro of the enemy which can be very useful against royal giant decks.

Fire Spirits: AKA Fire Midgets (Ideal level- 6+): When fire spirits were first released to the game, I was happy. They brought new ways to counter cards at a cheap and effective way. I use them to counter high elixir group cards such as barbs and minions. These cards work well with hog rider due to their speed and ability to lay waste to barb and minion counters.

Goblins (Ideal level- 6+): Goblins were one of my favorite common cards due to their DPS. For a cost of 2 elixir, these guys provide a big role of defense and offense to this deck. They can counter single target troops such as the P.E.K.K.A. and prince with ease providing you a great elixir advantage of 2 or more. Paired up with hog, these green baddies can dish out tons of damage to a tower. If this combo is left unchecked by your opponent, you can destroy that tower and damage the main tower quite a bit. This card also is a very good distraction.

Hog Rider (Ideal level- 4+): My favorite pushing card. He can only attack buildings, which allows him to not be as distracted as our giant skeleton. At a cost of 4 elixir, he is one of the cheapest pushing cards in the game. He can move at a very fast rate allowing him to get to the tower and deal damage before the opponent can even counter it. Paired up with other cards that can absorb damage, deal damage, and kill counter cards, this card can be very deadly. One of the best combos in the game with hog rider is hog rider, goblins, and zap. This combo alone can destroy a tower (if left unchecked) and deal damage to the center tower.

Rocket: This card is just an overpowered spell in my opinion. You can win a game just by cycling through cards and spamming rocket on a crown tower. Rocket can be used to take out dangerous low health troops such as sparky and 3 musketeers. Whenever using rocket on a tower, make sure the opponent just wasted a lot of elixir on a push so that they can’t take advantage of the fact you just wasted 6 elixir. The only time you can use rocket when the opponent hadn’t wasted a lot of elixir, is if their is a elixir collector near a tower or if to finish off a crown tower in overtime.

Giant Skeleton (Ideal leave- 2+): My favorite epic so far. Many players underestimate this card due to its low damage. The giant skeleton wasn’t made for being like a P.E.K.K.A., but to being  like a huge fire spirit. This card has quite a bit of hp, which can help tank some troops. What really matters about the giant skeleton is his huge bomb. The bomb counters very big rushes such as barbs and wizard. The bomb can also be used for offense, but it won’t be as effective as its role in defense. This card is also a very good gateway entry. When I say gateway entry, it means open an area to attack. The giant skeleton kills barbs and a minion horde that is used to counter a big rush. A hog then enters the opening free of counter card and attacks the crown tower.

Ok, that’s all I want to share with you about this deck. Hope this deck helps you push to higher arenas and more! 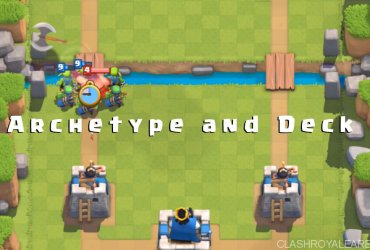 Today I’ll be giving you hopefully a helpful guide to explain what are the right cards for your deck and archetype. As we know there are 5 main kinds of … 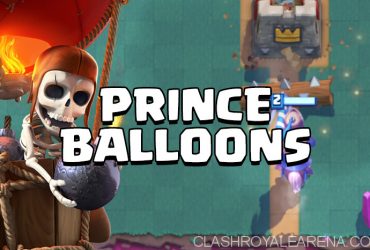 Hi everybody, I’m King Banana here with my Prince Balloon Control Deck. I’ve used this deck from Arena 2 (with some minor changes) through Arena 9. It really shines around …