Wassup Guys! It’s DabMaster2 back at it again with the new Hog Barrel Spell Bait Deck!

I based this deck on a deck I used a while back when I was still in Arena 6 to push to Arena 8 but I changed it to better counter the meta.

With the new balance update, though, the Hog Barrel combo is much more effective than it has been since now zap can’t kill same level goblins.

Without further ado, here is my deck guide. 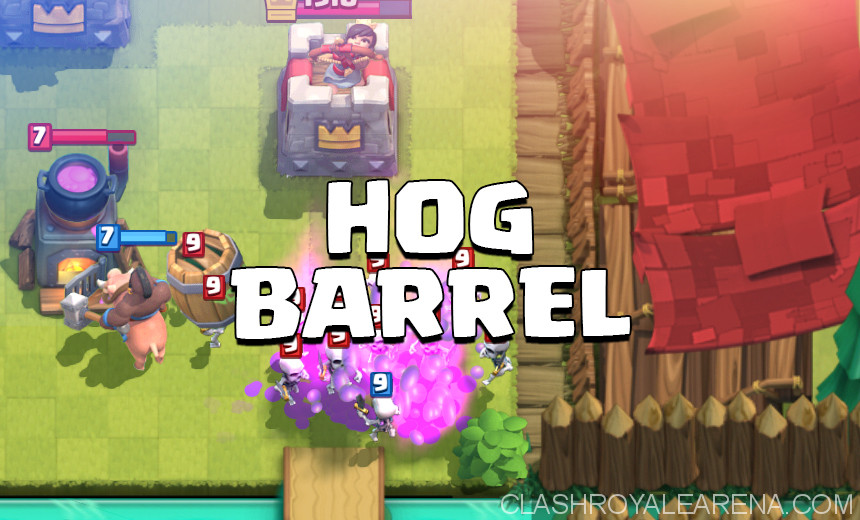 *Note: Not all the substitutions are as good as the original

Hog Rider – Your primary tower killer. He rushes the enemy tower and can do heavy damage. Pair him with any troop in this deck to create a strong push. When pushing with the Hog Rider, have a Zap always ready to take out a Skeleton Army.

Goblin Barrel – This is your secondary tower killer. It has a lot of potential to do heavy damage to an enemy tower and causes lots of pressure. It’s not easy to do that though, so here are a few tips:

Zap – Even with the recent nerf, it is still a valuable utility card. Use it to reset Sparky, Inferno Tower, and Inferno Dragon and use it to Zap enemy Skeleton Armies.

Skeleton Army – A staple card to any zap bait deck, use it to bait out Zap or if your opponent uses their Zap, do a Hog Rider Skeleton Army rush. The Skeleton Army also provides excellent defense capabilities to defend against tanks and Elite Barbarians.

Musketeer – She is a strong support card to have. When left alone, she’ll do massive damage to the enemy tower. Combo her with hog rider and Ice Golem for the new “Trifecta”. On defense, use her range support and decent damage to help take down tanks and medium health troops.

Fireball – Once again, another must-have spell card. It provides tons of value to take out swarms and groups of medium health troops. As a finisher move I like to do a Hog Barrel combo then do a “psychic” Fireball near the Hog Rider to predict any Minion Horde or Barbarians.

Ice Golem – Even with the recent nerf, he is still a strong card to use with the hog rider to tank for him and to tank for the Goblin Barrel on the enemy tower. Even just placing him in front of a weak Musketeer forces your opponent to respond or suffer major damage. On defense, this guy is what you’ll need to distract enemy troops to bide time for your troops to take them down.

In the beginning you will want to scout your opponent’s counters to your Goblin Barrel and Hog Rider. Here are some opening moves you’ll want to do:

Hog Rider at bridge– Find out your opponent’s counters to your hog rider. If they use a Skeleton Army, Zap it

*Important Note: Never start off with your inferno tower. Only use it reactively against incoming pushes.

Be careful not to overcommit and always have some elixir left to defend.

A main technique to use this time is to counter-push every time you have surviving troops.

Here are some strong pushes to use.

Ice Golem + Hog Rider + Musketeer – The “New Trifecta”. You can easily deal heavy damage to your opponent’s tower with this combo

This is where this deck shines.

During double Elixir, you can attack constantly with Hog rushes and force your opponent to defend constantly. By this time, your opponent’s tower should be less than 1500 health if you have been chipping at it during Mid Game.

You will want to be doing your normal Mid Game attack combos but also using finishing moves on weak towers.

Here are some strong attack combos to use here:

Heavy Beatdown Decks – Place your inferno tower right when the enemy tank reaches the bridge to make sure your inferno has full health left. Defend with Skeleton Army to surround and distract enemy troops, Musketeer is range support, Ice Golem is the distraction, and use Fireball against bunched up enemy troops. When they drop a tank in the back, pressure the other lane and make your opponent counter it to make sure your opponent can’t build up a huge push.

Hog Rider Decks – The Inferno Tower and Skeleton Army work well to counter a Hog Rider. Be very careful not to over commit since hog riders can punish you hard.

Miner Decks – Same as above, although you probably won’t be using your Inferno Tower much to defend.

Zap Bait Decks – Use your Zap wisely. A badly used Zap can cost you the game. Don’t use your Zap against a Goblin Barrel since it can’t one shot them and instead counter with a Skeleton Army.

Elite Barbarians – They can be counters with Skeleton Army easily but they will be Zapped. You can also distract with an Ice Golem and then use a Musketeer to take them out.

Siege Decks – The Ice Golem is great distraction while the Inferno Tower alone can decimate the enemy X-bow or Mortar. Hog Rider, Skeleton Army, and Musketeer are decent too, but protect them from being countered.

With the Zap nerf means a new meta. The Goblin Barrel meta! This deck is designed to counter the new Goblin Barrel meta and to crush opponents with its strong offense. The main playstyle of this deck is chip the opponent’s tower with goblin barrel and hog rider and to defend and counter-push so it’s like a control chip cycle deck mixed with spell bait.

Don’t forget my 3 don’ts of Clash Royale: Don’t over commit, don’t waste elixir, and don’t get upset. If you follow the 3 Don’ts, it is one more step to becoming a better Clash Royale Player.

If you’ve made it this far, you have just survived 1400+ words. I hoped you enjoyed this guide and try out my deck.